Enterprises today are taking a forward step in order to make better advantage of software testing. And in this entire process, there is one methodology and one tool involved and they are Behavior Driven Development (BDD) and Cucumber Framework. Wondering what are they how are they ruling software testing? Let's find out more about them in the below segment. 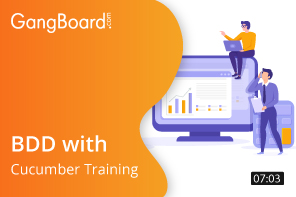 What is this course about?

This course is specially meant for analysts, testing professionals, developers, and all those who are keen to learn the Cucumber Testing Framework. This testing tool defines behaviour using simple English text and it is defined by a language called Gherkin. Cucumber enables automation functional validation which can be easily understood. It was first implemented in Ruby then moved to Java. Both support native JUnit.

What are the course objectives?

This is a comprehensive course guide that comprises all the necessary fundaments of Cucumber from basics to an extended level. The course will be conducted in detail and explained to your step-by-step in every chapter. Every chapter will be explained using the proper example to make it easy for you to understand.

Who can take up this course?

This course is designed for everyone is interested in learning Cucumber. Anyone who is from a non-programming background can also learn this course easily. No are no mandatory prerequisites for taking up the Cucumber Testing Framework course. However, it will be very helpful if you have background knowledge of testing and other testing tools. Basic understanding of Java, Ruby, and JUnit will be an added advantage.

Introduction to BDD with Cucumber Training

What is Behaviour Driven Development (BDD)?

Behavior Driven Development (BDD) is the latest methodology that’s used to test your code. During the development process, the most significant test scenarios will be implemented. BDD creates an opportunity to test scripts from the customer’s preference and the developer’s preference as well. In the beginning of this process, project managers, developers, testing team, QA team, and stakeholders all meet, discuss, and decide on which test scenario has to undergo BDD. This is how they decide upon a set of test scenarios. The test scripts will be in simple English which can become a user manual as well.

Firstly, users will write acceptance tests or scenarios, which will analyse and describe the system behaviour from the customer’s perspective. This test will be reviewed, by the product stakeholders before proceeding with the rest of the coding.

BDD is supported by a unique tool called Cucumber. It facilitates test writing in such an easy way which anyone can understand, irrespective of their technical background. Cucumber is leading BDD tool.

As mentioned earlier, Cucumber is a unique tool that supports BDD. In simple terms, Cucumber is a testing framework which is driven by simple and plain English language. This framework is also used as a development aid, documentation, and automated tests. Here we shall understand what Cucumber does. The following steps will easily make you understand Cucumber Framework Testing:

However, Cucumber supports most of the software platforms such as

This is one of the potential reasons for Cucumber’s popularity over Easyb, JDave, JBehave, etc. Once the code is ready, test scripts will also be ready. The code has to undergo the testing process as defined by BDD. If the code doesn’t pass the test, code refactoring will be done. If the testing happens successfully the codes will be freezed for the rest of the coding.

Advantages of Cucumber
Cucumber Vs Selenium Vs ALM

Many software companies who are involved in quality assurance are changing their current framework to new Cucumber framework with new strategies. This has created an acute demand for Cucumber professionals who can fit into their requirements. The job career of Cucumber is very wide. Any company involving business analysts in projects will look for Cucumber professionals who can understand the test behaviour, plain English texts, feature files, and the business uses out of the test cases. Many of the job hunting tools like Naukri, Linkedin, Monster, Glassdoor, all have an ample number of job postings on any given day for Cucumber. This clearly states that the requirement is huge, you just have to get prepared for it by doing this course.

Our BDD with Cucumber Online Course give students the opportunity to take classes on your flexible timings. Choose from a number of batches as per your convenience. If you got something urgent to do, reschedule your batch for a later time. The classes can be attended to at any place and any time as per your choice. At the End of our BDD with Cucumber Online Course, you will be assigned to work real-time projects. Once you completed the project with expected results we will verify and issue a globally recognized BDD with Cucumber Course Completion Certificate from GangBoard.

Its very pleasure to learn from GangBoard is a great time of career. Friendly trainer(prince Prabhu) and the learning environment is so practical. Thanks, GangBoard.

I completed my BDD with Cucumber Training from GangBoard.It’s really superb training. Because they have real-time experienced trainers. She explained the concepts clearly and patiently until I understood. Thanks to My Trainer Awantika Shukla and GangBoard.

I have completed my BDD with Cucumber Training successfully. I got good knowledge about the subject and I could showcase as work experience person since our trainer Nishanth had well trained with practical as well as theory. Since he is a very good friend and also a teacher. He explained every doubt then and there. Thanks a lot for GangBoard and trainer Ninth.

I have completed my BDD with Cucumber Training course at GangBoard, Annanagar. The classes were mostly practical that my trainer helped us to work it out in real-time examples which will be very much useful for my career. Thank you, MT. Karthik and GangBoard.

I have completed the BDD with Cucumber Training from GangBoard, Anna Nagar under the guidance of Mr. Karthik N. It was a very great experience to get trained by him. My trainer taught me every detail of BDD with Cucumber and helped me to improve my programming skills. The study materials provided by the trainer were very helpful. Thanks to GangBoard.