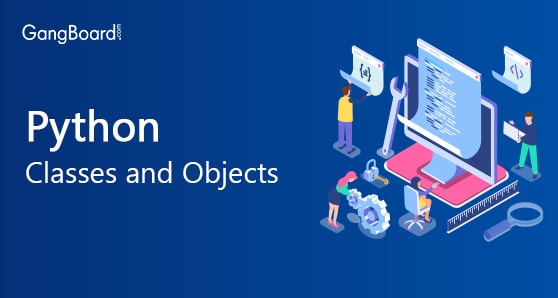 Python is a high-level objected oriented programming language meaning that most of the code in Python is implemented using classes. Classes are used to group related things together. By definition, a class is a template or blueprint for creating objects. It defines the methods and variables that are common to all objects of the same class.
Whereas, objects are an instance of a class. It is an entity that has its own distinct characteristics and behavior. One template can be used to create an end number of objects.
To get a better understanding of this concept, let’s take the example of a car. There are different types of cars which can be differentiated by distinct the attributes they have such as brand, model, color, etc. We can consider each type of cars as objects where Car is its class as it provides the template to create these specific objects. The following example demonstrates a simple use of class Car to create objects. Here car1 is an object of Car. In general, multiple objects can be created using a class template.

Wraping up of data and method (method will work on data )

Class is one of the most important key feature in python. It is the collection of variables and methods. In which methods are working on variables to perform   targeted task.It act as template for creating object.

Creating a Class in Python

A class is declared by using the keyword “class” followed by the class name which follows the UpperLowerCase convention. The class header ends with a colon in Python. All the methods and variables of the class are defined within the body of the class and are indented.

Above one is the example for class. Name must follow keyword class. Class Employee consists of four variables called name , emp_no, salaray, bonus. These varialbes are called instance variables. Also, It having two methods named get_net_salary() and display_employee details(). These methods are called instance methods.

In order to access variables and methods in class, need to create object for that class. Object is the instance of the class.
Creating object for the class Employee as follow.


Here, emp is the object for the class Employee. When instantiating object for the class , it is mandatory to pass values to all variable used in __init__(). It is the special method in python for initialing instance variable for that object. Each object will hold separate copy of the variables used in the class. So it is called instance variables and methods working on these instance variable is called instance method.
While creating object , it will call special method __init__() and initializing instance variables with passed values. As created object, it could able to access variable and methods in class.
Suppose we want to know net salary of employee, Need to call method get_net_salary() method using object as follow. It will return net salary of the employee by adding salary and bonus
In the same way, want to display details of the employee, need to call method display_employee_detail() as follow. It will display of the details of employee
Note that, methods are not doing anything interdependently. It just perform some task using variables. Not only method, instance variables are also accessible using object as follow.
Suppose want to alter any of the instance variable after creating object. It can be done as follow.
In order to ensure the change in the variable name , just calling the method display_employee_details(). Now, it will display Ram as name instead of Rajan. In the same way , any of the instance variables can be altered with the help of the object.
It is possible to create any number of objects for single class as follow.
It should be careful, while modifying instance variable using specific object in multiple object environment. Because, value may be assigned to instance variable of different object. It will lead to data collision.

A constructor is called automatically when an instance or object is created. The __init__ function or method is also known as a constructor or initializer. Many classes often begin by defining a constructor in order to initialize the attributes of a class. It is a reserved method in Python classes. It would be the first definition of a class and looks as shown below.

The self parameter is used to refer to the current instance of a class and is used for accessing the variables of the class in which it belongs to. It has to be placed in the first parameter of a function.

Attributes define the characteristics of a class. They are like variables that hold data. For instance, a class named Student can contain general characteristics or attributes of a student such as a name, grade, gender. The attributes can hold a specific value when creating an instance. For instance, name = “Peter”. The attribute of a class can be accessed by creating an object and using the dot operator followed by the attribute name. In order to access the attribute inside a class, the class needs to be instantiated first. This can be done by assigning the class to a variable. In this case, student1 is the object variable. This is known as object instantiation and is a way to call a constructor.

A class attribute is similar to a global variable in which the attribute belongs to the class rather than a specific object. It is shared between all the objects in a class and is defined outside the constructor. In the example below, “school” is a class attribute which can be directly accessed by using the class name dot attribute.
On the other hand, an instance attribute is defined within a class function and cannot be shared among other objects. They are unique for each object.

A class wouldn’t be of much use without having any functionality. Functionalities can be implemented by adding attributes and functions that are related to the attributes. These functions in a class context are known as methods. Methods define the behaviour of an object. The following example has a method named update_name which allows the name of the student to be changed or updated.

Multiple methods can be created and used in Python which of each performs a specific task just like functions. It helps in the reuse of code by simply calling the method name and any methods can be accessed by an object once its defined. In the example below, there are two methods that have been defined: update_age is a simple method that allows the age of the student to be updated while update_grade method allows the grade of the student to be updated. Any number of instances of this particular class can use or access these methods. The methods would perform the same task but the values of each object can be unique.

Infinite number of objects can also be created from the blueprint of its class. By referring to the object name, the value of the attributes of the particular object can be added or modified. Moreover, the unique values of each object can be accessed by calling the specific object name followed by a dot and then the attribute name.

How to find out attributes of an object in Python