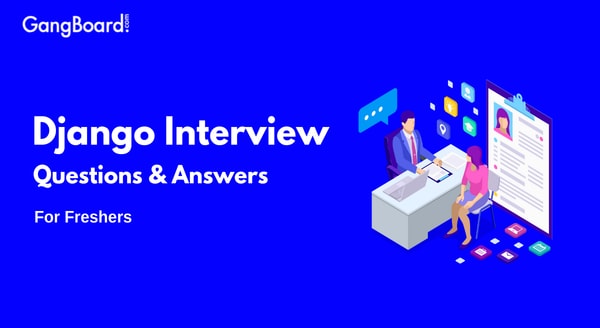 In case you’re searching for Django Interview Questions and answers for Experienced or Freshers, you are at the correct place. Django Interview Questions and Answers provided over here will familiarize you to the maximum frequently posted questions in interviews. The question lists provided are prepared by experts in a well-organized manner which will easily boost you for the interview preparation. There is parcel of chances from many presumed organizations on the planet. The Django advertise is relied upon to develop to more than $5 billion by 2021, from just $180 million, as per Django industry gauges. In this way, despite everything you have the chance to push forward in your vocation in Django Development. Gangboard offers Advanced Django Interview Questions and answers that assist you in splitting your Django interview and procure dream vocation as Django Developer.

Q2. What is the use of QuerySet in Django?

Ans: It’s collection of objects from database which used by Django ORM. When we map or use models to get group of records or single record from the database. It has returned as QuerySets.

Q3. What are the caching strategies that Django supports?

Ans: Below are the caching strategies which are supports Django.

Ans: This is the process which convert models into the various formats like XML, JSON etc.

Ans: Below are the listed top organization which are using Django.

Q6. Which class required to inherit in order to achieve unit tests in Django ?

Ans: To write the test cases ,django.test.TestCase required to inherit and it contains assertEquals , assertTrue and other’s to perform unit tests.

Q7. Differentiate between Project and an App?

Ans: Project is the collection of the apps and app is web application which create to achieve functionalities. One project can have N number of app and one project can be in many projects as well.

Q8. What are the static files used in Django ?

Ans: CSS , Images and JS files are used in to develop the web application and these files used to call the static files. These files are created with in the project directory with the subdirectory as static.

Q9. What are the steps to create a Django project?

Ans: Below are the steps to create project.

Q10. Describe the meaning of context in Django ?

Ans: Context is a dictionary mapping in Django which do mapping template name given to python objects.

Become a Python Expert with Certification in 25hours

Q11. Describe the use of file-based sessions in Django ?

Ans: You need to set SESSION_ENGINE setting to django.contrib.sessions.backends.file” to use file based session.

Ans: Django can not be call as CMS because it’s a Web framework and helps to build websites.

Ans: Below are the two important parameters –

Ans: This is the mechanism to store information on the server-side and by default it is store in database and allowed file-based,cache based sessions.

Q16. Describe Controller in the MVC framework of Django?

Q17. What are the files contains Django template ?

Q19. What all middleware’s functionalities achieve in Django?

Ans: Below are the list of usage in middleware’s.

Become a Python Expert with Certification in 25hours

Q21.What is the best and recommended way to install Django framework ?

Ans: It’s a way of implement views in the form of python objects instead of functions.

Ans: Following are the strategies.

Q24. What all types of inheritance supports in Django?

Q25. List out the types of inheritances in django framework ?

It contains the below types.

Q26. List out the types of Model relationships in django framework ?

Q27. How to make foreign key relation in Django ?

Q28. How to handle Exception or abnormal activity in Django framework ?

Ans: To handle the unusual event or exception leads to program failure , Django use exception class to support all type of exception. This can be predefined or user defined.

Q30. What is Django Rest Framework?