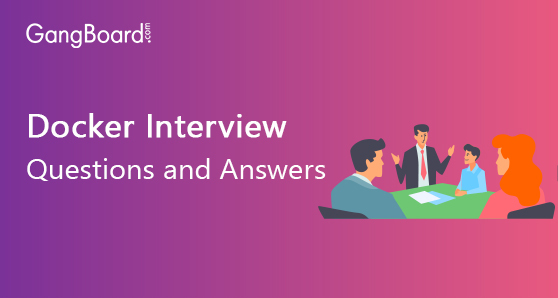 In case you’re searching for Docker Interview Questions and answers for Experienced or Freshers, you are at the correct place. There is parcel of chances from many presumed organizations on the planet. The Docker advertise is relied upon to develop to more than $5 billion by 2021, from just $180 million, as per Docker industry gauges. In this way, despite everything you have the chance to push forward in your vocation in Docker Development. GangBoard offers Advanced Docker Interview Questions and answers that assist you in splitting your Docker interview and procure dream vocation as Docker Developer.

Answer: Docker is light weight and more efficient in terms of resources because it uses the host underlying kernal rather than creating it’s own hypervisor.

Answer: There are three main features

Q3) What are the most common instructions in Dockerfile?

Answer: It starts  with docker file and need to build it to create image of the container then redistribute it using registry and run the containers.

Answer: Docker Swarm is native gathering for docker. It is used to group of Docker hosts into a single and virtual docker host. It provides the standard docker application program interface.

Q6) How to monitor the docker in production environments?

Q7) Why docker compose does not wait for a container to be ready before moving on to start next service in dependeny order?

Answer: Docker compose starts in a such a order based on the link volumes form and network mode.

Q10) Where does the docker daemon store the Docker images?

Q11) What are the various states of the Docker container?

Q13) Where the docker volumes are stored?

Q14) What is Docker object labels?

Q15) How to start containers automatically?


Become a Docker Expert with Certification in 25hours

Q17) How to publish the image?

Answer: By changing the replicas value in docker compose.yml and re run the command docker stack deploy.

Q21) What is the docker inspect do?

Answer: It will give the more information about container in json format.

Q23)Explain about CLI’s in Docker?

Q24) How to cleanup Docker image?

Q25) How to start Docker daemon?

Q26) How to get Docker performance?

Q27) How to check container logs?

Q31) How to check the container status ?

Q32) How you manage Docker images?

Q34) When you will use Docker swarm?

Answer: If we want to manage container scheduling over multiple hosts we will go for docker swarm.

Q36) what are the advantages of Docker?

Q37) What is the Docker container life cycle?

Q38) How to develop new apps on Docker?

Q39) which version of Docker you are using?

Q40) How to control Docker with systemd?

Q42) How to clean up Docker objects?

Q43) How do we share Docker containers with different nodes?

Answer : By using docker swarm . Docker swarm consists of two type of nodes. one is manager node and other is worker node.

Q44) What is the command to create a docker swarm?

Answer: By using docker compose. Each container runs seperately but they can interact with each other. All docker compose files uses yaml language.

Q46) Do you know how to use json instead of yaml compose file?

Q47) How to include code with copy/add or volumes?

Answer: In docker file we have to use COPY or ADD directive. this is useful to relocate code. we should use a volume if we want to make changes.

Q48) How to push the new image to Docker registry?