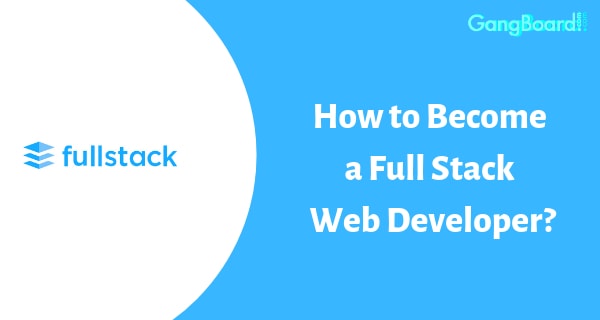 How to become a Full Stack Web Developer

As one of the definition goes, an expert programmer who have knowledge of every aspect and layer of development from start to finish, which can include the different stages of programming  such as servers, database, systems to the requirements of the end customer. In another words it could be even be seen as a glorified supervisor. The stack referred in the title is about a web stack, mobile or native application stack and as obvious as the name is full stack knowledge would be the very basic requirement of the title holder.
Opposing to the above some also say that a Full stack web developer not necessarily be an expert in all of the skills but with the basic knowledge of everything so that he can guide and supervise the team leading towards the end result or a third thought is that it is just a mystical title and doesn’t exist. Whichever be the argument, Full stack programmer is a title that has been trending in the recent years among programmers and one of the most soughed job profile.

The role or title does come with a long set of responsibilities and knowledge requirements and of course experience as such list of knowledge in the real world can only come with years of trial and error. It’s not all gloom for the newbie who wants to achieve the status as planning one’s career and experience in the right way can be helpful in reaching the goal quicker. The below mentioned essentials are key and vital for someone who is setting up the target of achieving the title and experience as a Full stack web developer.

The very essentials of a web developer are the technical know-how and the new developments in the programming language world. From java and python to ruby should be aware of every programming around and should possess some level of understanding of each, especially the advantages and disadvantages as he/she will be the person in charge to recommend the most appropriate to the team and this is highly essential when dealing with mid-project crisis that may arise and the management of the same.
The knowledge don’t have to be in-depth but enough to maintain the confidence of one’s team.

The mastery over front –end technologies such as HTML5, Java script, CSS3 and further knowledge of the extended arms of the same, where to access the library and such information’s are essential .This knowledge is required to guarantee the customer expectations and end result satisfaction which decides the success or failure of a product.

The role of a full stack web developer being in charge of projects large and small would be to have one or more database storage for various purposes. Whether it be document-type database or backend database the in-depth knowledge and access is highly essential. The knowledge of sessions, in-memory data stores and cookies are essential for the role.

The hardest part of the project could possibly be the creation of web applications; media file hosting, computing task performing and structure codes. These are the norms to be mastered after a strong foundation in programs and languages. These are something which cannot be gained over night but through practical knowledge.

Though this might sound basic, the knowledge on basic algorithms and data structures, hash tables etc are necessary for succeeding in the role of a Full stacked web developer. Even if not backed with a degree, the knowledge of the mentioned would indicate a strong foundation and the much required confidence the employer need to assign a project without concern.

All of the above mentioned sets of skills and knowledge would be inadequate if the person lacks in personnel skills as supervising a project comes with its own hurdles and managing  many people ,both from the official and customer end.

Like any project, the application of knowledge and completion at the right time is at most necessary for the task to be called a success. The role as a full stack web developer means not only managing individual time efficiently but also that of the team for the common objective.

The person in charge should also be an effective communicator as the right idea and steps are to be conveyed to a set of people with different skills and levels of understanding and possibly handling different language for the role to be more effective.

The role of a full stacked web developer would demand a high level of creativity and the willingness to experiment as the development of certain software or products might  come with an added  advantage which if presented and worked out in the appropriate and creative way would add value to the end result and be the beginning of a new trend. Most of the popular and trendy products were created due to the daringness of the creator combined with risk taking experiments and creativity in the right combination.

The role would demand leading from front showing how to solve problems and turn them into an advantage. A project leader would be fair to all the team members and know the strengths and weakness of all of the team members and them all combined and use the skills in the right proportion to bring out the desired result at the same time manage the team without internal problems.

When working with a large team with different set of skills, the chances of an unexpected problem rising is common, but overcoming the same without compromising on time and quality is the most important part. Quick decision making to resolve such issues would not only gain the confidence of your team but also help evolve as an expert in the role.

It is can be concluded that even though the role of a Full stacked web developer is highly desirable ,it is far from the role of a normal programmer  in terms of the skills and knowledge required. It also comes with a high level of responsibility and commitment with a lot of management skills too. A beginner to rise to such a role would need to start accruing a wide and different set of skills about programming and outside the box too.  This is a role that would achieve not overnight but years of hands on experiment.