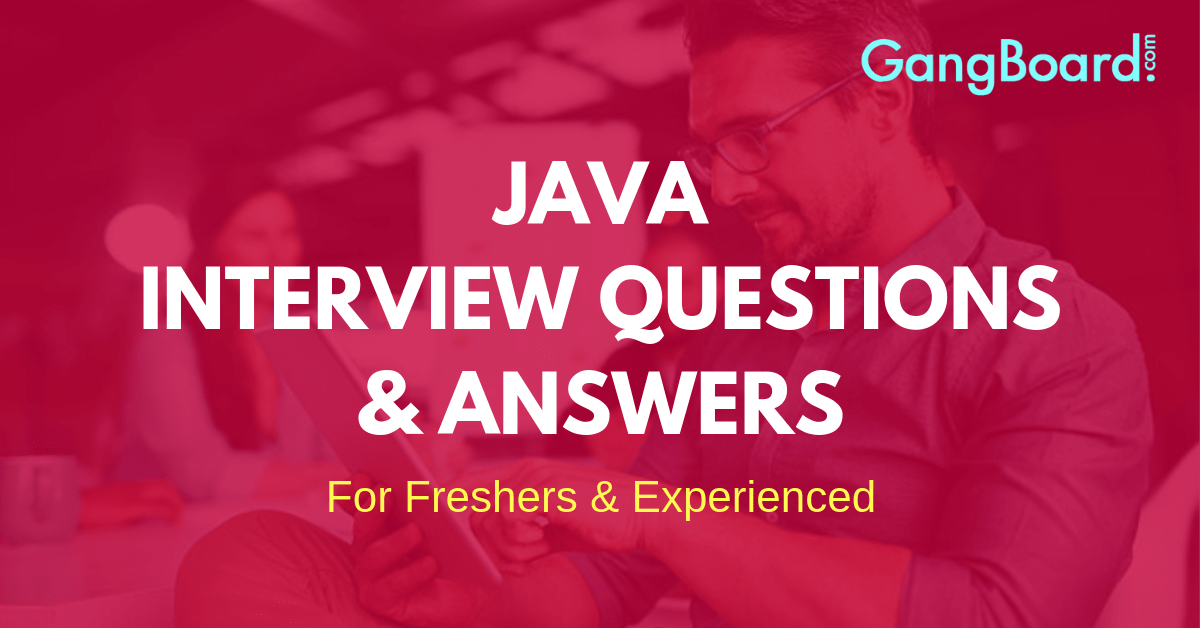 Q1) Explain Java? and how does Java enables high performance?

Answer: Java is a platform-independent, object-oriented, portable, multi-thread, high-level programming language. The collection of objects is considering as Java. We use Java for developing lots of websites, games and mobile applications. For high performance, Java uses Just in time compiler.

Q2) What is serialization?

Answer: Serialization converts an object to a stream of bytes for safety purposes. We can save it as a file, store in DB or send it by the network. We can also recreate the state of an item when needed.

Q3) What is a Java virtual machine?

Answer: JVM helps the computer to run the Java program or other languages. It acts as a run-time engine. Java code is compiled into bytecode to run on any computer.

Answer: A name for a memory location is variable. And it is called a basic unit of storage in a program. You can change the stored value during the program execution.

Answer: Classloader is a Java runtime environment to load Java classes into Java virtual machine. It loads class files from the network, file system, and other sources. In java, there is 3 built-in classloader.

Q7) What are the wrapper class?

Q8) Define a package and its advantages?

Answer: The collection of classes, sub-packages, and interfaces are bundled together is called packages. We can modularize the code and optimize its reuse. The code can also be imported by other classes and reused.

Answer: JIT is a program to help in changing the Java bytecode into instructions. It improves the performance of Java applications at the run time and known as the integral parts of the Java Runtime Environment.

Q10) What are the special keywords in Java? Name them

Answer: The special keywords in Java are access modifiers. Constructor, variable, scope of a class, data member or method is restricted. Default, private, protected and the public are four types of access modifiers.

Q11) What are garbage collectors? and types.

Answer: It implicit memory management and destroy the unused objects to relieve the memory. It automatically removes the unreferenced objects to make the memory efficient. There are 4 types of garbage collectors.

Q12) Tell the smallest piece of programmed instructions? How does it create?

Q13) What executes a set of statements?

Answer: Finally block always executes a set of statements. It is with a try block of any exception occurs or not. It does not execute the program by calling System.exit( ) or by a fatal error.

Q14) What refers to Multi-threading?

Answer: Synchronization, it keeps all concurrent threads in execution. Memory consistency errors are avoided by synchronization. Execution of multiple threads accesses the same objects and fields. The thread holds the monitor when the method is considered as synchronized.

Q15) Tell the purpose of final, finally and finalize?

Q16) Where we use a different signature?

Answer: In method overloading signature must be different. The same class method shares the same name. Every single method should be the indifferent number of parameters or different orders or types of parameters. For “adding” or “extending” and known as a compile-time polymorphism.

Q17) What is Run-time polymorphism?

Answer: Method Overriding is run-time polymorphism having the same signature. Inheritance is required in Method Overriding. It is used to change existing behavior. The subclass has the same method od same number, name, parameters, return type.

Q18 ) Name the method that belongs to the class?

Answer: In Java, the static method belongs to the class and access only static data. It calls only other static methods and directly accessed by the class name. To define variables, static is used.

Answer: The programming paradigm based on data and methods is called object-oriented programming. Paradigm incorporates the advantages of reusability and modularity. Objects are instances of classes to interact with one another. It designs programs and applications.

Answer: A real-time entity of some behavior and state is called an object. It is an instance of a class with instance variables. The new keyword is for creating the object of the class.

Q21) What is an object-based programming language?

Q23) How to copy the values of the item to others in Java?

Answer: We can print the values by using the constructor, to allow the values of one object to other and the design of clone. In Java, there is no copy constructor.

Answer: The Java method is invoked explicitly and is to disclose the nature of an item, it has an entry. Its name is not the same as the class name. It is not given by the finder.

Answer: The static variable belongs to the class and makes the memory-efficient of the program. It refers to the common property of all objects. At the moment when class is loading, it gets the memory in the department field.

Q27) What is a super keyword? Mention its uses.

Answer: The Super keyword is a hint variable is to mention at once parent class item with the concept of inheritance, the keyword comes into the picture.

Q28) What is method overriding? Name the rules and use them.

Answer: In Java method overriding is when a subclass has the specific implementation or the same method as in the parent class.
Rules

Q29) What are polymorphism and its types?

Answer: Polymorphism is used in a different context and define the situations. When a single object refers to the super or sub-class depends on the reference type is polymorphism. Many forms are considered as polymorphism.

Answer: For programmers to create the components for re-using in different ways. OOPs is known as programming style. The four concepts are

Q31) What is stored in a heap memory?

Answer: Java String pool is a collection of Strings are stored. If you create a new object, the string pool confirms the object is in the pool or not. The same reference is returned to the variable if it is already in the pool.

Q32) How to call one constructor to another to the current object?

Q34) What is the interface of the Util package? It’s characteristics.

Answer: Map in Java is the interface of the Util package. It is used to map a key and a value. It is different from other collection types. And it is not the subset of the main collection interface.

Answer: Stack memory is in the Last-In-First-Out order to free memory. It is used for the execution of a thread. It contains local primitives and reference to other objects. To define the stack memory, we use –Xss. The memory of the stack is considered short-lived.