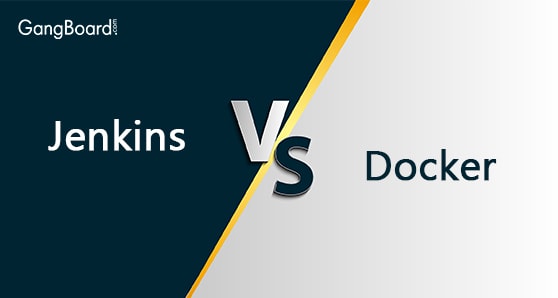 Jenkins is the schedule of the job which is most often used for running the developed software. Docker is the container developed to run the applications on the operating system inside the computers primary operating system.

Jenkins is an automation tool which is open source written in java with built plugins used for continuous integration purpose. It is specially used for building and testing your software projects continuously making it easy for developers to incorporate the changes to the project. It makes it easy for users to obtaining a fresh building. It also enables you to continue delivering the software with integration of a large number of testing and integrating technologies.
With the use of Jenkins, organizations can develop software development procedures via automation. It also incorporates the cycle of the life process of all types of development which includes building, stage, integration, static analysis and much more.
Jenkins gets continuous integration with the help of plugins which allows the integration of several stages of DevOps. If you wish to deploy the particular tool, then you require the installation of the plugin for this tool. For example Git, Maven 2 project, Amazon, publisher of HTML, etc.
There are many benefits to Jenkins. It is an open source tool with the support of a great community. It has easy steps for installation. It has more than thousands of plugins for easy work. If the plugin does not occur, then you can code it correctly and share it with the community. It is free of cost and developed with java and thus, it is possible for all the major platforms.

Docker is the tool specially designed for easily building, deploying and running application by using containers. Containers enable the developer to pack up an application with all the parts it requires such libraries and other dependencies. It ships out all as one package.
By this, the container is beneficial, where the developer can assure the application running on the other machine of Linux. Without concern of the customized settings which might have to differ from the machine that we used for writing and test the code.
In the way, Docker is a little bit the same as the virtual machine. But not similar to the virtual machine, rather than creating the complete virtual system. Docker gives permission to the applications for using the same Linux kernel operating system as the system which is running on.
It only requires the applications to be integrated with the things not running on the hosting computer. It provides important and significant performance boosting and reduces the size of the application.
Additionally, Docker is an open source which means that the anybody can contribute it to the Docker where it can extend its own requirements if there is the need of additional features which are not available out of the box.