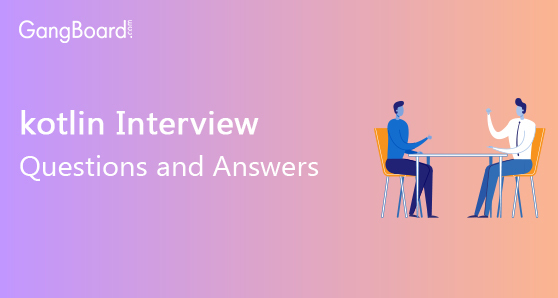 In case you’re searching for kotlin Interview Questions and answers for Experienced or Freshers, you are at the correct place. There is parcel of chances from many presumed organizations on the planet. The kotlin advertise is relied upon to develop to more than $5 billion by 2020, from just $180 million, as per kotlin industry gauges. In this way, despite everything you have the chance to push forward in your vocation in kotlin Development. GangBoard offers Advanced kotlin Interview Questions and answers that assist you in splitting your kotlin interview and procure dream vocation as AWS Developer.

Ans: Kotlin is a free open source project licenced under Apache2.0, it is a statically-typed programming language which runs on the JVM. It can be compiled by Java source code or LLVM compiler.

Q2) Who is the developer of Kotlin?

Ans: Jetbrains is a software company which created kotlin. This company focuses mainly on tools that are specifically for project managers and software developers.

Q3) Why you should shift from Java to kotlin?

Ans: Kotlin is very simple compared to java, it minimises redundancies in code and offers many useful features that java doesn’t support.

Q4) What are the features that kotlin support and java doesn’t?

Ans: The following are the important features that kotlin supports over java:

Q5) What are the programming types that Kotlin supports?

Ans: Kotlin supports two types of programming they are:

Q6) List the number of constructors available in Kotlin?

Ans: Constructors are of two types they are:

Q7) How to handle null exceptions in Kotlin programming?

Q8) How can data class be used in Kotlin?

Ans: Data class supports basic data types, it doesn’t have any other functionality.

Q9) How do you export code from Java to Kotlin?

Ans: JetBrains software provides an inbuilt tool called jetbrain idea, it helps in exporting the code from java to kotlin.

Q10) How do you declare a variable in kotlin?

Ans: Declaration of a variable in kotlin differs from java, below is the format for that:
val s: String = “Hi”
var x = 5

Ans: Kotlin developers are facing difficulties in including macros in the language, so offering support for macros in kotlin is not possible.

Q12) How do you declare ranges operator in kotlin?

Ans: Ranges operator is used to iterate through a range, the operator is of form (..), for example
for (i in 1..15)
print(i)
The above format will print the output as a range of numbers from 1 to 15.

Q13) Describe the use of extension function?

Ans: Extension function is useful in extending a class without having the need to inherit from the class.

Ans: Below listed are the extension methods that kotlin provides to java.io.file:

Q15) What is the difference between Const and Val?

Q16) List some of the key modifiers in kotlin?

Ans: Kotlin has a list of few key modifiers, they are:

Q17) How do you differentiate var and val in Kotin?

Q19) What is the purpose of creating kotlin?

Ans: Kotlin was created by a Czech company named after JetBrains and the actual purpose of creating it was to solve their internal development problems.

Q20) Which companies use kotlin?

Ans: Kotlin is used by major companies around the globe, here are some of them:

Q21) What is the latest version of kotlin?

Ans: Currently kotlin is updated to version 1.3.30. This version has a bug fix and tooling update for 1.3. This release focuses mainly on KAPT performance, kotlin Native and improvements for IntelliJ IDEA.

Q22) How is kotlin integrated with Gradle?

Ans: With the release of Gradle 5.0, kotlin offers support for gradle. You can have a look at it here: Gradle Kotlin DSL v1.0

Ans: Kotlin is an open source statically-typed programming language developed by JetBrains that is strongly supported Java Virtual Machine (JVM) in an Android ecosystem along with Java.

Q23)  Name some of the features that have Kotlin but not in present in Java?

Ans: kotlin has many features that are not present in Java. The following are a few features:

Q24) Why you should switch to Kotlin from Java?

Ans: Kotlin is the easiest language compared to Java as they reduce redundant code in an application. Kotlin offers new features that Java doesn’t support.

Q25) What type of programming does Kotlin support?

Ans: Kotlin will support two kinds of programming listed below:

Q26) what is the use of extension functions in Kotlin?

Ans: Extension functions are used to extend the class without inheriting from the class.

Q27) What is the default visibility modifier and also list the different types of modifiers?

Ans: The default visibility modifier is public. The following are a few types of modifiers:

Q28) What is Kotlin’s target platform? Is Java-kotlin interoperability possible?

Ans: The target platform for Kotlin is JVM. Java is 100% interoperable with Kotlin because on compilation both produce the same bytecode. Therefore Java code can be called from Kotlin and the reverse is also possible.

Q29) How to declare a Kotlin variable?

Q30) What is the difference between Val and var declaration?

Ans: Val is similar to final modifiers in Java they can’t be changed. Var can be reassigned but the data type cannot be changed. An example is shown below:
Val y: string = “hi”
Var x = 2

Q31) How to convert a String to an Integer?

Q32) Is it possible to migrate the code from Java to Kotlin?

Ans: Yes, it is possible to migrate the code from Java to Kotlin. JetBrains IDE is required to perform this action as it facilitates the conversion.

Q33) What are the different types of constructors in Kotlin?

Ans: There are two types of constructors in Kotlin namely:

Ans: The following are the three structural expressions in Kotlin.
Return: It returns value from the functions by default.
Break: terminates the loop condition.
Continue: precedes you to the next enclosing loop.

Q36) What are the data classes in Kotlin? How are they defined?

Q37) what operator is used to handle null exceptions in Kotlin?

Q38) What are High-Level Functions in Kotlin?

Ans: Functions that accept another function are called high order functions. Kotlin regards its functions as citizens of first class and passes the variables to other function.

Q39) What are Coroutines?

Ans: Coroutine is a light-weight thread that doesn’t require any context switching on the processor and will not map on native threads. This is the reason why they are fast in processing the requests.

Q40) How to create static methods in Kotlin?

Q41)  What are the advantages and disadvantages of Kotlin?

Ans: The following are a few pros and cons in using Kotlin: