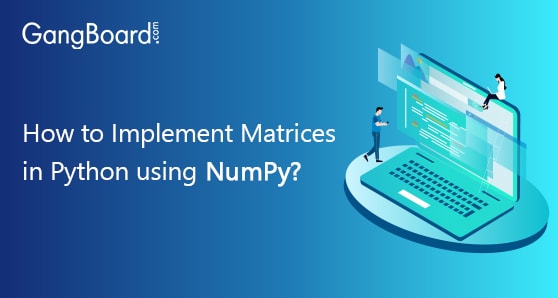 How to Implement Matrices in Python using NumPy?

What is a matrix?

A Matrix is a two-dimensional array or rectangular array of numbers where each of its data elements will be of the same size. Matrices are generally data structures that were used to perform math and scientific computations. In a matrix, data that is present horizontally are called as “rows” and data that were present vertically are called as “columns”. Say, for example, the number of elements in a matrix (or) the size of the matrix of (A) x (B) where A is the rows and B is the columns. There is no built-in type for a matrix in python and therefore, a conventional matrix with two or more lists as a matrix.
Let us try to understand the concept of matrix manipulation in python with an illustration. The following is a python code with a matrix:

The output of the above python code for matrices is as follows:

How will you use the NumPy package for manipulating matrices in Python?

NumPy is a package available in Python library. Through this package, one can perform scientific computing. Also, it allows users to work with multi-dimensional arrays. Let us perform the addition of matrices using this NumPy package through the following illustration:

Result of the product of two matrices is

How will you add a new row?

Using NumPy package, we can add a new row as follows:

We will get the result as follows once we execute the above code:

How will you add a new column to a matrix?

Adding a new column to a matrix is possible through insert() option. To add a column, we must add the index in the place we need to add the new column and the array that contain the new values of the newly added column. In the following example, we add a new column in the fifth position as follows:

We will get the result as follows while we execute the above code:

How will you delete a row in a matrix?

Similar to adding a new row, deleting a row is also possible using delete() option. Similarly, we have to mention the index of that row and the axis value. The axis value will be ‘0’ in case of a row and ‘1’ for a column.

How will you delete a column from a matrix?

Similar to deleting a row, deleting a column from a matrix can be performed using delete() method. We have to mention the index of that row and the axis value. The axis value will be ‘0’ in case of a row and ‘1’ for a column.

Once executing the above code, we will get the result as follows:

How will you update a row in a matrix?

Updating values of a row in a matrix will replace the values present already with the new values. Let us do it with the following example:

Once we execute the above script, the values present in the third row will be replaced with the new values as below:

With this topic, we conclude this tutorial. I hope this topic will be useful to you. See you on the next topic.