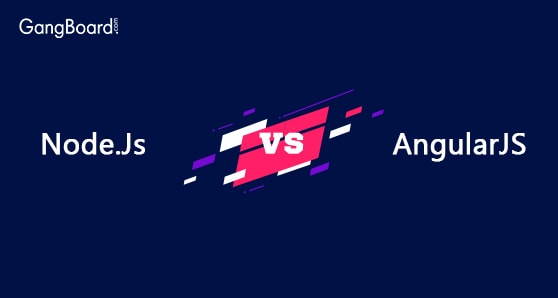 Javascript has found the simple client-side scripting language and developed into the powerful programming language which can also be used for creating the server side application. AngularJS and Node.Js framework are used for making a client and server-side applications interactive and rich in features.

Node.Js is the cross-platform, open source with runtime environment used for building server-side and networking type of applications. The Node.Js framework is written in javascript which can be run within the Node.Js. It also offers the rich library of several javascript modules that simplify the building web applications to a great extent.
There are many features of Node.Js such as scalability, unit testing, server development, performance, open source benefits. You can scale your applications of Node.Js by using two ways such as horizontal scaling and vertical scaling for improving the performance of the application.
It also allows you to perform unit testing out of the box where you can use any unit of JS frameworks such as Jasmin for testing your Node.Js code.
Node.Js has also inbuilt API which helps you in creating several types of servers such as HTTP server, DNS server, TCP server, etc. It also offers high performance since Node.Js I/O operations which are non-blocking.
It is used for the execution of javascript code with javascript engine. V8 engine compiles the JS code directly to the machine code for making it faster. It is an open source and thus it is free to use where you do not need to pay for its license and it can be extended as per your requirements.
Node.Js is used for serving the web which is runtime and developed on the javascript engine in google chrome. It can be recognized as the lightweight server which can offer client requests in a simple way comparing to the java.  It performs the operation with databases, web sockets, and middleware, etc.

AngularJS is the framework of javascript. It is an open source web application which is maintained by Google. AngularJs javascript programs are added to the HTML pages with the script tag. It also extends attributes of HTML with directives and binds data to HTML. It helps the user in developing dynamic applications or views in web application.
It is incorporated with model view architecture and its components. It has earned a high position of the most favored framework for developing data-driven and interactive web applications.
AngularJS is deployed with a model view architecture. It is used for supporting other patterns such as model view controller or model view modes. The view changes and manipulates the elements of DOM for updating the data and behavior. As per the use of AngularJS building, the manipulation of DOM is the program of directives and not its view.
AngularJS is the framework developed in javascript language. It also manages the state of models as well as get integrate with other user UI tools. It is used for manipulation of DOM and enables writing custom codes of HTML. It is for those javascript developers for creating dynamic web pages quickly.

Comparison of Node.Js and Angular JS