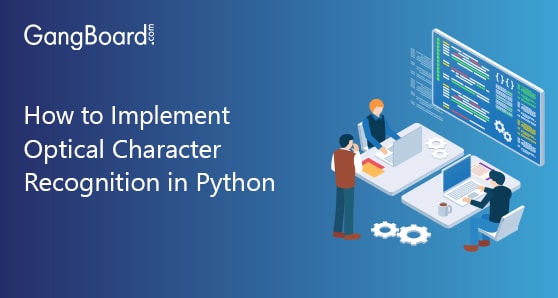 How to Implement Optical Character Recognition in Python

Any human can recognize and understand contents in any image that he sees through his eyes by reading it very easily. But computers aren’t developed in such a way to perceive the image as text, so they need a more organized and concrete way to make them understand as we learn.
Optical character recognition (OCR) is one of the major ways to make computers educate about reading the text out of images which has very wide applications in real-world like Number plates recognition for traffic control, scanning of documents and copying important information from it and etc. Python offers many great libraries to implement this OCR. in this blog, we would go through the implementation of OCR with python. As part of this, we will be discussing below topics

What Exactly is OCR?

This process of OCR mentioned would surely not fetch us cent percent accurate results, it would also need some corrections from the human end when input elements would not have scanned properly. Correction in errors can also be achieved using dictionaries and also with NLP too.


Get Prepared for Python Interviews!

With invent and advancement of OCR technologies manual effort of the document, digitalization is almost reduced by 80%.
Scenario 1: copying text from Scanned ID cards.
We would have many times faced this problem of doing manual effort in seeing and typing the required information like DL number, PAN number …etc while filling the documents but OCR would help us to get out of this manual effort with document scanner mobile like CAM SCANNER, Abode scan… etc.
Scenario 2: Passport recognition in airports
Many Airports using OCR technologies have reduced their manual efforts for the passport recognition process and as well as extracting much-needed information from them.
There are many more applications of OCR like Recognition of Number plates for traffic management, Automation of data entry or collection …etc.

As part of this blog, we will build a simple OCR model to recognize and print the text from the image from our system, there are many other libraries like Textract for extracting data from pdf’s, pyocr for detection of sentences, and digits and also most popular OpenCV. But for this blog, we would use a library called PyTesseract (python Tesseract) which is from Google’s Tesseract-OCR Engine, which is an open-source tool and completely maintained by Google. Along with this, we would also use a library called pillow which is forked from PIL (Python Imaging Library) handles images of various formats and help us in opening and manipulating them.
Note: All the coding is done using Jupiter notebooks

Before moving on to coding first we are installing required packages (if already installed ignore above code). Now let us create a small function that takes an image that needs to be decoded to the text as input and return text as output. 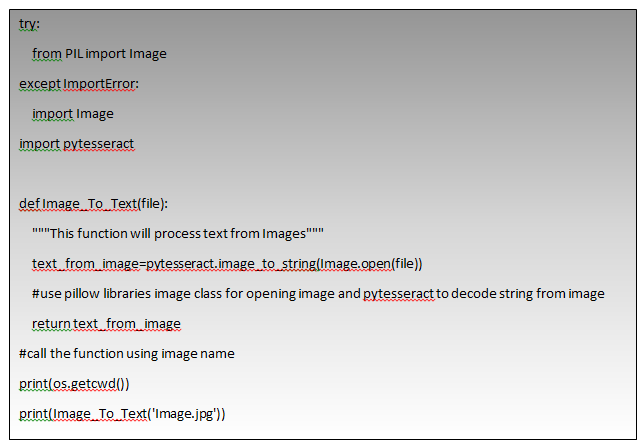 In the first 5 lines of code, we are importing the classes that we need and then we are reading an image from the disk and then using pillow and tesseract function for OCR.

We have given below image as input:
And the output that we get is


So we see that text was almost correct except the cursor, so we can store above output into some variable and then use text for further analysis.