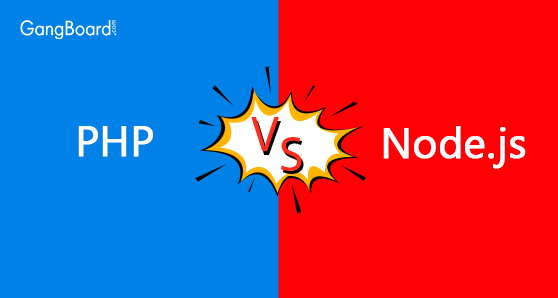 PHP Vs Node.js – What Should You Choose?

Websites play a key role in any industry to leave a lasting impression in the minds of the readers and attract intended customers before the competitors. Websites are built with the help of backend developments which is carried out with the help of programming languages such as PHP and Node.js.
The emergence of a large number of backend frameworks has also given rise to a larger extent of confusion amongst the developers about the choice of the apt programming language for them. Node.js and PHP are two prominent ones which share close features.

PHP or Hypertext Preprocessor is one of the most popularly used server-side programming script by web developers around the globe. It is a mature language having released in 1995 and has been a part of major websites such as WordPress and Joomla. It basically is a general-purpose scripting language.

Node.js is different from PHP as it is not a scripting language but a backend development setting that follows JavaScript. Since its initial release in 2009, it has generated a lot of sites that have come up with total dependence on JavaScript for both front and back end development. This runtime and development environment allows a number of frameworks to run on it.
Both PHP and Node.js have the backing of JavaScript which is an interpreted language. This enables the codes to run in their separate runtime settings (Servers for PHP and Browsers for Node.js). The learning curve for JavaScript is easy and anyone can master it quickly. This is what appeals to most of the developers and the major point of confusion in choosing between Node.js vs PHP.

As nature of the project plays an important role if nature differs the choice of the language also must differ. For this critical understanding and knowledge of both the languages must be known to the developers. The article tries to cover all the necessary information required to make a wise decision.
Below we have provided you with the tabular form of association between these two languages. All of the significant points of differences between Node.js vs PHP will be further discussed after the table.

In-Depth Comparision of Node.Js and PHP

As you refer to the table that states the services offered by Node.JS or PHP, you will see a lot of technical features where both of these technologies differ. But that does not give you a complete understanding of what’s better for your server requirements. Some of the major dispensaries have been discussed below with the intention of making the choice clear for you.

While anchoring up a Node.JS server is not difficult, the developer will have to write more lines of codes when compared to PHP. Also, he or she is expected to know how callback functions and closures work.
PHP, on the other hand, allows setting up a server in a much simpler way. You need a “.php” file with any code typed between the tags and then enter the URL into your browser. The MySQL web servers installed with PHP will display the web page in your browser. Hence PHP is much simpler to use.

Both Node.JS and PHP need an interpreter to run when directly inserted into HTML. The choice of these interpreters will determine the winner for you. Node.JS is powered by the powerful Google V8 JavaScript engine while PHP is backed by the Zend engine, which is straightforward and easy to install.

Another significant aspect in PHP vs Node.js, JavaScript Object Notation gives a sparse edge to Node.JS. It is a lightweight data format, which can also be used with PHP but that happens situationally.

Code Execution can be either synchronous or asynchronous. The synchronous line of code will execute simultaneous lines of codes only when the current code line is executed. Asynchronous codes execute all at once. This means that synchronous codes take a lot more time in completion and asynchronous will take much lesser time to complete.
PHP is synchronous in nature while Node.js is asynchronous, this means Node.js is faster compared to PHP when it comes to code execution. Node.JS also has an Await/Async feature that blocks the execution if a lot of changes have to be made in the lines.

Efficient code writing involves writing all of them in a single language. The efficiency of the programmer drops when he has to switch between programming languages attributed to the environment.
Node.JS is the clear winner here in PHP vs Node.js as the entire back end and the front end development is done with JavaScript. You do not have to switch between languages while developing client-side or server-side networks. With PHP you are required to have a good language of JavaScript along with MySql syntaxes and HTML and CSS languages.

Both Node.js and PHP are server-side technologies that are implemented by top sites. They have their reasons to use them and it will be the same for you. They are more or less the same and have an almost balanced weight in their respective pros and cons. JavaScript can easily be learned by beginners as well as Veterans. This can mean you can choose Node.js if you are thinking of creating the entire server with JavaScript.
Go for PHP if your project requires servers such as MySQL or if you are looking to build a site like WordPress. These differences between PHP vs Node.js will determine the type of service you provide, so be careful. In the end, the choice will depend on your needs and resources. We hope that this PHP vs Node.js article offered you some clarity and helped you reach a decision.