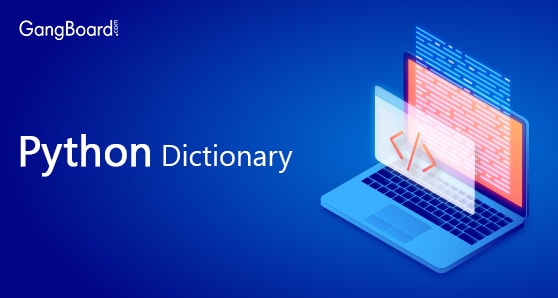 What is a Dictionary in Python?

A dictionary is an unordered set or collection of items or objects where unique keys are mapped with values. These keys are used to access the corresponding paired value. While the keys are unique, values can be common and repeated. The data type of a value is also mutable and can be changed whereas, the data type of keys must be immutable such as strings, numbers or tuples. In Python, dictionaries are defined by adding curly brackets followed by adding the key: value pair which is separated by a colon as shown below.

A dictionary is a composite data type in Python which resembles a list. However, a list has an ordered set of objects which can iterate and can be referenced and accessed by an index number unlike a dictionary which is unordered and has a key:value pair where values are accessed by keys.

Accessing an item in a dictionary

In order to  access a value in a dictionary, you can write the variable name of the dictionary followed by squared brackets inside which you can type in the key name to access its value. If you want to access a particular value with keys that contain many values, you can use indexing as shown below:

In the above example, the existing key ‘name’ is used to accessed its value ‘Ariel’. However, if a key  does not exist is called, it would provide an error.

You can also update your dictionary in order to add a new entry or key:pair value, modify existing data or even delete data.

Get Prepared for Python Interviews !
Methods used in dictionaries
The following methods are already in-built and can be used on dictionaries. 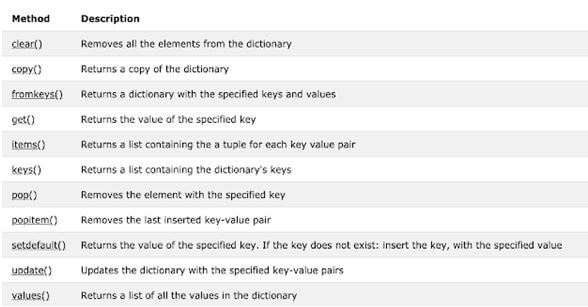 Upon using the clear() method, all the key:value pairs are removed from the dictionary so the output returns and empty dictionary.

In order to copy a key:value pair, an existing dictionary should not be assigned to a new dictionary (for instance, dictionary_1 = dictionary_2) as changes made in dictionary_1 will affect dictionary_2 as well.  As a result, the copy() can be used to make copies of a dictionary to avoid such problem.

With the fromkeys() method, you can create a new dictionary from a sequence of elements which will be used as keys. These keys will be provided with a value.

items() method can be used to list all the keys in a dictionary along with their values.

All the keys in a dictionary can be listed by using the keys() method.

The pop() method is used to remove a selected item from the dictionary.

The last item in a dictionary will be removed with the popitem() method.

The values within a dictionary can be updated or changed by  assigning a new value to the specified key.

A list of all the values within the dictionary will be listed.