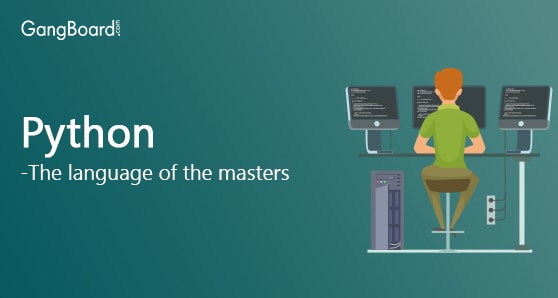 Python- the language of the masters

Whether you are straight out of college and unemployed or a professional looking to make it big in the software industry, whether you are new to code or a master coder, Python is something you need to know because of its versatility and simplicity that fewer can do even after years of developing around it. It’s never too late to start learning programming and where else to start than Python. Allow me to elaborate on that.

The first thing that comes to mind when talking about Python is how simple it is to learn.
There isn’t a lot of ceremony to Python’s code. The syntax is relatively simple and seems designed keeping newcomers in mind. Python code is often 3-5 times shorter than Java, and about 5-10 times shorter than C++.
Python is a versatile language. Even though it’s much older than most languages out there, it can still be applied to pretty much any software development scenario. From managing cloud systems to building small time tools, name it and Python can be used in it. This makes learning Python a worthwhile endeavor.
Python can be your stepping stone to other languages. Employers today look for a well stacked programmer and Python will help you become one by preparing you in object oriented programming.
Knowledge in scripting using Python can be a good base because Python’s methods can be used in JavaScript, C++, C#, Perl, Ruby, and other important programming languages.
Python has one of the largest package libraries. You can make use of the repository containing more than 85,000 Python modules and scripts at your disposal to solve problems in a wide range of environments.
It is the most used language in modern data science.

Employment opportunities are rising in data analytics as both coder and analyst. The skills you develop learning Python will help in directly building these analytics skills. Open-source and cross-platform languages are the future. Python is the best that can happen to you when it comes to creating a website or a web application. It’s an open-source language with huge community, so it’s safe to say it’s immortal. The global Python community have created and continue to create a lot of wonderful libraries which give Python variety and powerful weapons to be a cloud app, a PC application, a media software, a server utility, etc. New technologies come every day. But I’m quite positive that all of them will be friends of Python. These are reasons enough why one should choose to get training in Python. GangBoard is a well-recognized online training institute for Python Training.GangBoard provides Python online Training with expert guidance and fully practical classes. Our Course Syllabus is designed to meet the needs of corporate clientele which is guaranteed help you to clear the interviews easily .Our Python Training in Chennai package also includes job placement assistance, which is really a bonus point for students.

What to expect in the future

Python, like any popular language, is evolving. Python 3.x is the “future”. New awesome tools are coming up to speed up Python code to C levels. Faster alternative Python implementations like PyPy are made available. Interfaces with languages of similar syntax has been made to make coding easier. Better libraries are coming up to add more support. At GangBoard, our expert trainers keep themselves updated so that you don’t lag behind. We provide training in all the concepts of version 2.0 and also help you work with version 3.0. We keep you in par with industry standards and demands.