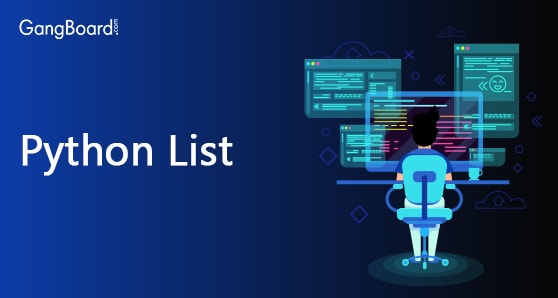 Python contains six (6) built-in sequences types, where List are said to be the common one. Python Lists are similar to arrays that are stated in various other languages. It is always not necessary to have standardized lists and this stands out to be an utmost influential tool available in Python. A Python list may contain different Datatypes such as strings, objects, and integers. Python Lists are helpful to implement queues and stacks. Once the Python lists are created, they can be altered as the lists are mutable.

List creation in Python is done by placing all the elements separated by commas, within a square bracket [ ]. As already mentioned above, a list can contain any number of items which can be of dissimilar types such as float, integer, string and so on. Below is an example for Python list creation:
# list of integers
my_list = [1, 2, 3] Python List that has another list within the same syntax as an item is called nested list. For example,
# nested listmy_list = [“mouse pad”, [8, 2, 6], [‘a’]]

How to Create multiple elements in Python-List

How to Replacing value with Python-List

How to create Add element, Extended the list, Delete value for the python-List?

In this clear method is used clear the data value complete list.
list_name.clear()

So, now it’s time to start your coding with Python Programming Language using all the above mentions methods, functions, and syntax.

Count Method is used to count the occurrence of a specific element in the list.

In this Method used to count the value of the total element in the list.

In this Method is used to find out the sum of the elements in the list.

Lists can be thought of the most general version of a sequence in Python. Unlike strings, they are mutable, meaning the elements inside a list can be changed! Lists are constructed with brackets [] and commas separating every element in the list.
In this section we will learn about:

Indexing and slicing work just like in strings. Let’s make a new list to remind
ourselves of how this works:

retrieve the 1st element until third

retrieve the 2nd element until the end of the list

We can also use + to concatenate lists, just like we did for strings.

Now, let us have a short discussion on each Python List methods with examples so that you can have a hands-on experience.

Unlike string or tuple, list elements can be changed as lists are mutable.
To change a range of items or an item, you can use the assignment operator (=).

You can use append()to add one item to a list as shown in the below example.

Use extend() to add numerous items to the Python List as shown in the below example.

Use the method insert() to insert one item at an anticipated location or you can also insert multiple items. Look into the below examples for more clarification.

Example for inserting one item:

Add an item to a particular postion/index

Use the operator ‘+’ to combine two (2) lists and this type of process is called concatenation.

The operator ‘*’ is used to repeat a list for the provided count. Refer the below example:

In Python List, to delete one or more items, use the keyword del. You can use the same keyword to delete the entire list.

Use the method remove() to eliminate the specified item from the list.

Use the method pop()to eliminate an item at the specified index. If an index is not given, pop() method is used to remove and return the last item and this method is helpful in implementing lists as stacks, i.e. first in, last out data structure.

Method count()is to count the number of times that an element occurred in a Python List and returns the same. Syntax for count()method is given below:
list.count(element)

You can copy the list using the operator “=”. But, while modifying the new list, the old list will also get modified. To get the original list unaffected after making the changes to the new list, use the method copy() and this is known as a shallow copy.
Syntax: new_list = list.copy()