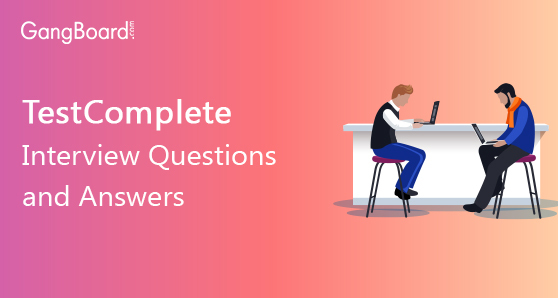 Q1) What do you understand by TestComplete?

Answer: TestComplete is an automation testing tool for user-interface that was developed by Smart Bear. This software application tool is used for various types of automatic testing purposes. It is generally used for creating, maintaining and executing several functional tests across desktop, mobile, and on the web application.\

Q2) What are the types of automation tests supported by TestComplete?

Q3) What is the latest version of TestComplete software application?

Q4) What are applications and technologies are supported by TestComplete?

Q5) What are programming languages supported by TestComplete?

Q6) What is the primary purpose of TestedApp included in TestComplete?

Answer: The primary purpose of TestedApp that is included in TestComplete is to make a list of the tested web application. We could also add several other attributes such as Command Line Arguments, Number of Instances, etc.

Q7) After being added to TestedApp, could we call back any application?

Answer: Yes, we can call back any application after it has been added to TestedApp included in TestComplete.

Q8) How could we call back any application from TestedApp?

Answer: By using the TestApp Object, we could call back any application from TestApp. If the app is in the list, then we would have to use the property of TestedApp.Items.

Q9) Does TestComplete software application have a Play and Record Mechanism?

Answer: TestComplete Recording is the mechanism where the software records every action that takes place on the user interface of the desktop, mobile, and web application.

Q11) What are the two types of mechanism in TestComplete Recording?

Answer: There are two mechanisms in TestComplete Recording. One is a simple Record Mechanism where the software would start recording from starting or it might resume after a pause. Another one is Low-Level Record where recording after getting screen coordinates from the user.

Q12) What is the default button of Low-Level Record Mechanism and simple RecordMechanism?

Q14) Can we perform Cross Browser Testing by using TestComplete?

Q15) Which internet browsers are supported by the TestComplete software application?

Answer: There are numbers of browsers that are supported by the TestComplete software application. Some of the examples of such browsers are Google Chrome, Opera Browser, Internet Explorer and Safari.

Q16) How many ways are there for capturing objects included in TestComplete?

Q17) What are those three methods for capturing objects that are included in the software?

Q18) What do you mean by Find Method?

Answer: Find Method is generally used for searching your desired objects (or a single object) from the Object Hierarchy. Depending on the Specified Value of any Specified Property, Find Method searches for the intended object.
Q19) What do you understand by FindAll Method?
Answer: FindAll method is applicable for searching your desired objects from the list of an object hierarchy. This method searches for the whole object that might have the Specified Value of Specified Properties. This method would store the whole Object List in an Array.

Answer: find child Method is pretty similar to the Find Method but instead of an object, it would only search for a single Child Object.

Answer: FindAllChildren Method is also pretty similar to the FindAll method but of searching for a whole object, it would search for all Children Object and store them in an array.

Q22) Can we count the number of children present in an object? If yes how?

Q23) Can we perform Descriptive Programming in TestComplete?

Answer: By using Find, FindChild, FindAllChildren, and FindAll Method we would be able to perform Descriptive Programming on TestComplete platform.

Q24) What do you mean by Open Application for TestComplete?

Answer: Any application that would expose its Internal Object Methods and Properties to TestComplete is considered as Open Application for TestComplete.

Q25) What are the numbers of Checkpoints present in TestComplete?

Q26) What do you mean by NameMapping?

Answer: NameMapping is one of the important features of TestComplete through which we could provide a Custom Name for any selected object. The unique name is created by using some special values.

Q27) What do you mean by Data-Driven Testing?

Answer: A test that is run on an application by inputting various sets of data to ensure it is working properly variable data sets. This kind of test is known as Data-Driven Testing under TestComplete. The Data is inputted into the system by using Text File, CSV File, and Database file.

Q28) What do you mean by On Error Resume Next line?

Answer: ‘On Error Resume Next’ is generally used for handling any exception that might happen during the testing process in TestComplete. When we apply this statement, the process would jump over the Exception Window and would continue the testing process.

Q29) How would you test your web application on other workstations or nodes?

Answer: By using the Concept of Network Suite, we could test a web application on other workstations or nodes. This test is only possible when the node is the part of the whole the network.

Q30) What type of framework would you use for automation?

Q31) In TestComplete, can we compare strings with each other?

Q32) How selenium and TestComplete interact with each other?

Answer: Through TestComplete, we would be able to re-use old selenium scripts for building test automation solution that would include unit, functional test, and selenium for both mobile and desktop application.

Q33) How to measure efforts of Automated Web Test?

Answer: Using programming language, create a selenium test and import it to the TestComplete IDE. Then apply the test script as the part of GUI test. After the test, you would like to analyze the result to understand the efforts of your Automated Web Test.

Q34) What type of results are displayed from the selenium testing?

Answer: The results from the test show real-time status and information regarding the efforts of Automated Web Test on a single interface.

Q35) What are the benefits of merging TestComplete and Selenium?

Answer: There are many benefits of merging TestComplete and Selenium. Here are some benefits:

Q36) How would integration with selenium effects testing time of TestComplete?

Answer: Integration of selenium with TestComplete would reduce the testing time while it would increase the coverage area for the test with the help of Cross Browser Testing.

Answer: With the help of Cross Browser Testing, you could easily run the selenium test script on real browsers and devices. You would be able to run thousands of GUI tests at single thus saving both resources and time.

Answer: This feature would allow the user to get real-time status and information regarding the progress of GUI tests in the form of a detailed report that would understandable by everyone.

Q39) How would Automated Test Analysis and Reporting report the test results?

Answer: This automatic feature would breakdown the test result according to the configurations for the better identification of the areas that would need attention. This feature would also record the test execution time for identifying slow areas.

Q40) Are the results are easy enough for everyone to understand?

Answer: The report would feature videos, images, and logs that are recorded during the execution of the test. The reports are sent in a various file format such as HTML, JUnit or MHT for easy sharing with team members who don’t have TestComplete.

Q41) What is the main purpose of recording GUI test execution?

Q42) Could we reuse old Functional Automated Test in TestComplete?

Q43) How could we reuse old Functional Automated Test in TestComplete?

Answer: We just have paste parts of old selenium or GUI tests to new test script to develop the new test function.

Q44) What are the benefits of reusing old Functional Automated Test in TestComplete?

Answer: The major benefit that we would not have to start creating from scratch. Another benefit of this feature would be that it would save for the users.

Answer: Creating a custom library for reusing old Functional Automated Test script would increase the efficiency of this feature.

Answer: The kind of test approach for software testing where the test case design separated from the execution of the software. This test is done specific keywords used in the browser by the user.

Answer: The creation process of Keyword Driven Test is pretty simple. The user would just have to drag and drop a keyword on the system and the rest of the test would be done by TestComplete.

Q49) Can we build a keyword-driven framework in TestComplete?

Yes, we could build a keyword-driven framework in TestComplete.

Q50) How building a keyword-driven framework in TestComplete would be beneficial?

Answer: Building a keyword-driven framework in TestComplete would allow the user to distinguish between test steps, actions, objects, test data, and actions. You could also reuse any components on any other project with any requirement of technical knowledge.