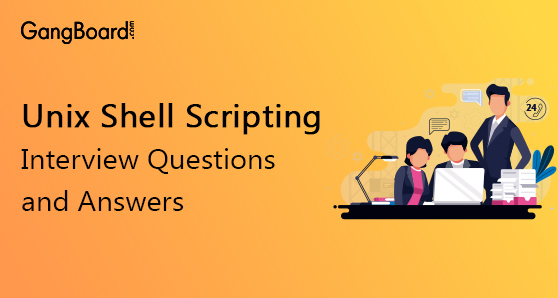 In case you’re searching for Unix Shell Scripting Interview Questions and Answers for Experienced or Freshers, you are at the correct place. Additionally,  Our Shell Scripting Online Training will prepare the learners for developing applications like automating code, create an environment for programming, complete batch, manipulating files, routing backups, monitor system, and linking programs which run in the existing system. The coverage of topics through Shell Scripting Online Course are statements, functions, loops, variables of the shell, user commands with CLI, bourne shell and C shell.

The syllabus and the following interview question and answers will prepare the learners for the different job roles assigned for Shell Script developers. Roles that are open with a vacancy for shell script developers are automation engineer, system engineer, network administrator and UNIX engineer and Linux engineer.  Start the journey of holding the best profession with training and the corresponding interview question and answers after Shell Scripting Online Certification Training.

Answer: The shell can be described as the command line user interface for the UNIX operating system. As the development experts define “shell is both command and scripting language that is basically used to control the execution of the system.

Q2) Describe the shell types in the UNIX?

Answer: In the UNIX there are basically two primary types of shells:

Q3) Who wrote the first UNIX shell in history?

Answer: Stephen R. Bourne was the person who first wrote original UNIX shell back in 1970 when he was working as an employee at the AT&T.

Q4) What is shell scripts?

Answer: The shell scripts are the list of commands that are organized in a way to execute a program in UNIX. Generally, shell scripts contain; comments, followed by the # sign and further describing the execution steps.

Q5) How do you create shortcuts in the Linux?

Answer: It is done through the built-in links in the Linux which are also known as:

Q6) Explain the difference between soft and hard links?

Answer: The most common difference between the soft and hard link is, a hard link is a direct reference to the file in UNIX. However, on the other hand, the soft link is the name refers to the file which means they point out files using their names.

Q7) Can you link directories to soft links?

Answer: Yes, you can link directories to the soft links as the file system structure supports them.

Q8) How do you know if you have the soft or hard link?

Q9) How hard links are used in the UNIX?

Q10) How will you find out which command you are currently using?

Answer: It can be easily done using the “echo$SHELL” in the scripting language.

Q11) Do hard and soft link shares the same Inode?

Q12) Do hard link work even after deleting the soft link?

Answer: Yes, the hard will work even after you end up deleting the soft file. As they are a perfect mirror copy of soft link, you can access the file until the links to the file are do not end up on zero.

Q13) Can you link directories to hard links?

Answer: No, you cannot link directories to hard links and the reason behind it is quite technical. For now, you can learn that directories don’t fit into the system and essentially break it. So, in order to protect the file system structure, directories are avoided link with hard links.

Q14) What are the benefits of using shell scripting?

Answer: The key benefits users will receive from shell scripting are:

Q15) Do you need to use a special compiler for executing shell program?

Answer: No, there is no need to use the personal compiler to execute the shell program as the shell itself can interpret the command and executes them.

Q16) What is the base of the Unix shell?

Answer: The Unix shells work upon the principle that it cannot only accept the commands from the keyboards but also from the files.

Q17) Can you modify the file permissions?

Answer: Yes, you can easily modify the file permission using the umask.

Answer: Shell variables play a significant role in the shell scripting or programming by storing and manipulating the information within the shell program.

Q19) Write down the types of shell variables?

Answer: There are basically two types of shell variables known as:

Q20) What is the average lifespan of a variable in the shell?

Answer: The lifespan of a variable is very small and is valid until the execution.

Q21) Can you make a variable unchangeable? If yes, then explain?

Answer: Yes, a variable can be made unchangeable and this can be accomplished using readonly. For instance, if you wish to keep the value of the variable a, 10 then you can do it with readonly.

Q22) How you can completely remove variables from the shell?

Answer: You can completely remove all the variables using the unset command in the shell.

Q23) What are the security provisions provided by the Unix to protect the system?

Q24) What are the top three significant editors in Unix?

Answer: Ed, vi and ex are the three significant editors that are available in almost every version of UNIX.

Q25) Write down modes of operations in Vi editors and describe them?

Q26) Describe the role of echo in the shell scripting?

Answer: Echo is the built-in command of the shell that is used to write arguments in standard output.

Q27) What is the alternative command for the echo?

Answer: tput is used as an alternative command for the echo in the shell scripting.

Q28) What IFS denotes in the shell?

Answer: The term IFS stands for the Internal field separator and it is one of the most crucial variables of the shell scripting. It has space, tab, and line as the default value.

Q29) What is break statement why do we use it?

Answer: The break refers to the command that is used whenever the user wants to directly jump out of the loop rather than following the path which leads back to the control command. Every single time break statement takes place in the program, the control automatically gets passed after the first line of command.

Q30) Which command you will use to find out the run time?

Answer: Uptime is used to find out how long the system has been running.