Home Blog App Programming and Scripting What is Chef? 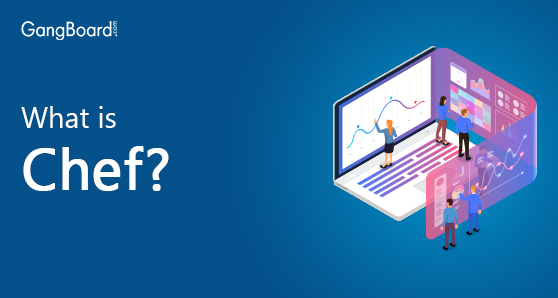 You read it right, it’s not who but what! while laymen might think it is a person who specializes in the culinary art but ask a tech guy, you will hear about the recipes that have been written for a server application or system utility.

It saves the trials of all hardware and Software associated information of a company, while it also rectifies, installs and updates the whole infrastructure or application with its automation methods. Configuration management is actually a virtual human who possesses the power of multiple developers and several system administrators by manages thousands of applications along with the server. Major Configuration management tools available today are Chef, Ansible, CF Engine, Puppet, etc.

Now to answer the question “What is Chef?”

It is an open source software configuration management tool, which was written in client-side Ruby and server side Erlang/Ruby; It can be used for arranging the virtual machine and physical servers, while it can also be used for infrastructure automation for Cloud. Some of the many Chef clients or users are Facebook, Bloomberg, GE Digital, Intuit, Humana, HPE, IBM, Microsoft, NCR, Nordstrom, Target, etc.

What is Chef? | Introduction to Chef | GangBoard

Adam Jacob who had a consulting firm created “Chef” as a simple software, where is company was making deployment and end-to-end server products. Subsequently, Jesse Robins who was managing the operations in Amazon introduced to Chef by Jacob, instantly was amazed by its business value and prospects. Later along with Joshua Timberman, Barry Steinglass, and Nathen Haneysmith, both Jesse Robins and Adam Jacob started a company with the purpose of transforming Chef into the viable product with actionable business applications.
The software initially was called “Marionette”, later found it very lengthy and difficult to refer. Over time, the very model of “Recipe” type in which the batches were created suggested the name “Chef” and it was rechristened.
Version 11 of Chef was released by Opscode in the first quarter of 2013 which had a holistic revamp of the fundamental API Server in Erlang.

The need for Configuration Management (ie Why Chef?)

It started after the concept of scalability came into play post Cloud era, where earlier we had single system, now we have hundreds of servers for which one has to configure software and hardware will be a time-consuming task if one does manually, But imagine the infrastructure can be treated as a software program (user designed machines) as “recipes”, which defines Chef’s ability to manage the server apps, databases, web servers, etc and one can write the configuration as well. Meanwhile, the recipes can be bucketed together to form a CookBook which will perform one specific task and similarly many cookbooks can be created for relaxed management from then on. And yes, there is Chef Server which encompassed all the Cookbooks, when a Chef Client knocks for any recipe, the server sends the recipe and teaches the entity to configure by itself.
Any changes, updates or patches can be easily made by modifying the recipe which will change the entire infrastructure unlike changing individual machines separately.

Chef has primarily two use cases:

Chef follows a Chef has a Client-Server architecture, but Chef gets an additional part called Workstation.
Chef also has an Enterprise Automation Stack, which bundles an integrated blanket of all Chef’s tools (Chef Infra, Chef Automate, Chef Habitat, Chef Workstation, and Chef InSpec).

This year 2019, has been special for Chef users and aspirants, because by early April this year, the company announced that it will go fully open sourced source code model from its earlier proprietary tools which helped only enterprise users. Now it is part of the open source ecosystem under the Apache 2.0 License.

How is Chef used in DevOps?

As we discussed earlier, Chef is for automation and infrastructure management. Chef Client and Chef Server are two DevOps Products in Chef through which IT Automation is possible. Chef in DevOps is used as a smooth and fluid code delivery and collaboration. Thereby contributing to Continuous Integration (CI) and Continuous delivery (CD).
The idea is either to recruit specialists and train them or create automation more reachable to IT generalists. To put is straight, right now DevOps practices are not much accessible in the IT Organizations which is why it is not found everywhere. Tools like Chef make the of reach DevOps more handy in the automation of Applications and Infrastructure By making it easier to automate the management of both infrastructure and applications.
Very frequently Chef is refining its features and upgrades to provide better results to the user or customer. Chef in DevOps Environment has created a huge space for Career opportunities for trained and experienced technical professionals.
DevOps approach is here to stay, but the proportion of its growth and adoption is quite uncertain to forecast. One thing is evident, the IT ecosystem is evolving to be more layered and intricate for typical IT Administrators to manage with the traditional ways.  There is a need for quick Turnaround time for all tickets of all sizes, which demands the IT teams to possess a comprehensive view of the infrastructure and application deployment. DevOps framework is so rooted and fundamental, that down in time, say within the immediate 2-3 years, organizations would have adopted it without even realizing it.