Home Blog python Why you should learn python? 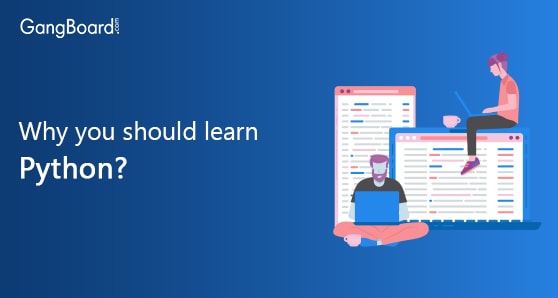 Python is not just a programming language but the ecosystem with a plenty of development processes around it that has made it a most favorable option for the data science, machine learning, and the AI. Python is gaining popularity in all areas of software development today either it is scripting, process automation, workflows, general apps, web services, or APIs etc.

Recently, it has been one of most optimum choice for AI industries too. Here are the four highly convincing reason why Python is growing into AI or other similar fields. These reasons will make you sure why someone should learn this programming language and why it is suitable for an advanced career development.

1. Programming is easy with Python for Beginners

This is the major reason that explores why Python has become a general success theory because it keeps the things simple and manageable. When Python was developed, the objective was to read and write both.  The code is read by the team members often than it is written. With a good Python code, you can add more quality to your app than any other languages.

The other major benefit of the programming language is an object-based abstraction for tasks at a higher level. The complex applications are the result of multi-stage workflows. So, focus more on requirements instead of implementation is always better. Python is able to maintain a healthy gap between you and the job work that you will not be overwhelmed at first glance.

2. Python has a set of libraries and APIs

With a set of libraries and APIs, this is always easy designing and developing robust apps in Python for different domains. So, Python can always be taken as the choice of priority when it comes to performance, adaptability, simplicity etc.

With the help of Python, a number of frameworks can be installed together at one workspace with the help of a single command only. In brief, the ecosystem in Python provides a level of convenience to developers

3. Speed is not an issue in Python anymore

Most people describe python as the convenient but not the faster language. This is true partially where development work is pretty easy but speed is slower than expectations. So, even if its speed is not good why it is used aggressively worldwide for complex domains like AI, Data Science, machine learning and more.

The reason is most of the computation work is done by Python itself but it is done with the help of libraries written in other programming languages like Java, C or C++ etc. And the parts of an application that are written in Python are not performance sensitive and they are easy to handle and setup.

Still, if developers make a lot of switch between Python components and external APIs then it may affect the performance badly. So, developers should try to minimize the switch to achieve the desired level of performance. Further, you can speed-up the general Python code too with the help of a variety of tools

4. Python has Memory Management features for You

The abstraction level offered by the Python programming language can be extended to many other realms. In the case of Python, the finer details for memory management are concealed from the programmer so that they could focus on the problem more. The built-in constructors, lists, sets, tuples, in Python all help in memory management at the runtime. Java and Python work in the same way but Python is little more verbose when compared to Java.
Almost every organization needs constructs that are memory managed and organization data logically to perform actual computation work smoothly. Most of the computation work in Python is managed through third-party libraries but again the abstraction offered by the language at the runtime is truly worth and handling several layers below user actions too.

Sometimes, you have to pay for effective memory management results in Python. For the best possible performance, you need to work with lower-level abstractions available in the Python. Another way to optimize performance is converting Python code into C language that will allow direct access to memory management data constructs in multiple ways that are not possible with Python directly.
Ultimately, these four reasons together make Python a powerful programming language to learn in 2019 and beyond where you can use a set of libraries, ecosystem, APIs together to match the expected performance levels.