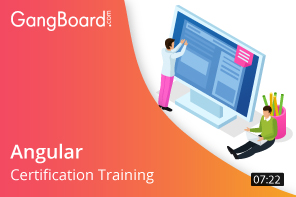 According to Pay Scale, the average pay for a front end engineer or developer with skills in Angular is Rs 491,309 annually. The amount may vary based on experience and places. By pursuing an Angular course from GangBoard, you will be able to shine as a Web app developer or web developer, Front end web developer or front end developer, UI developer, and JavaScript developers.The Angular Certification training course from GangBoard is dealt with experienced and professional instructors who have in-depth knowledge about Angular and other related fields. All our trainers are supportive as well as guarantees for job support and placement assistance.

The Angular Training course in Mumbai from GangBoard is the top-notch course preferred by most of the student as well as professionals. The Angular classes deal with various concepts starting from basic definition to final testing. The initial concepts deal with Angular technology stack, angular library components, benefits of Angular, and more. TypeScripts like the need for TypeScript, Nodemon, class interfaces, maps & sets, object de-structuring is also a part of the Syllabus.

What you will learn in this Angular training in Mumbai?

Angular is the most popular technology that creates dynamic applications, and their dependency injection and data binding feature significantly. GangBoard is one of the Best Online Angular training in Mumbai that enables you to

What are the objectives of the Angular Course in Mumbai?

The Angular Certification Training Course in Mumbai from GangBoard will help you to comprehend different factors, namely.

Who should attend this Angular Certification Course in Mumbai?

Angular course in Mumbai from GangBoard is suitable for

What are the prerequisites for learning Angular Training Course?

Gang Board’s Angular Training in Mumbai has few prerequisites to learn the course. They are

Our Angular Online Course gives students the opportunity to take classes on your flexible timings. Choose from a number of batches as per your convenience. If you got something urgent to do, reschedule your batch for a later time. The classes can be attended to at any place and at any time as per your choice.

At the End of our Angular Online Course, you will be assigned to work real-time projects. Once you completed the project with expected results we will verify and issue a globally recognized Angular Course Completion Certificate from GangBoard.

I did my Angular Certification Training in Mumbai and my trainer is Monika, she teaches very well. They teach by good experienced and IT Professionals. So I suggest GangBoard to Train On Java Certification Course is flexible. Thank you, GangBoard.

I have joined Angular Certification Training in Mumbai at GangBoard. My Staff Surya is good at teaching and I am completely satisfied in GangBoard. I am glad to refer my friends to GangBoard in the future.

Hi all, I’ve completed Angular Certification Training in Mumbai from GangBoard. Each and every concept was explained with real-time examples. Also, an assignment which he gave was very useful to understand the concepts. The trainer made sure we understood the topic of discussion before moving on to the next. I should thank my trainer Siva and GangBoard.

I have completed  Tableau Certification Training in Mumbai at GangBoard. Excellent teaching from Gayathri mam. She is very good at explaining each topic and she also makes sure that everyone understands the concept. She is very dedicated to explaining topics and giving interview related information. Thanks to GangBoard.