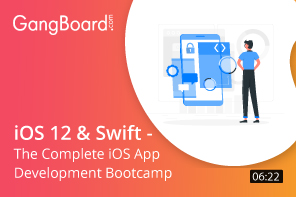 iOS 12 & Swift Online Training gives a detailed understanding of the Swift toolchains that are used to switch between the versions of swift and X code creates links with ruby and python for better coding. The new build system is updated with the X code files which is available with compatibility. This makes the operations of the swift faster. The parallel test, Xccov, and random test optimize the different types of testing. A Different number of clones can be added to the simulator for running the Xcode UI Test and XCTest in parallel. Machine learning algorithms and frameworks are added to the iOS apps which will help for the production of iOS apps with machine learning models. The iOS 12 & Swift Online Training is conducted with the projects which encompass the concepts like integrations of machine learning with iOS, usage of tools for iOS, usage of different programming languages for iOS, creating shortcut features with Srini for interacting with clients, usage of 3D object detection, ARKit 2.0 face tracking, creating car play with animations and communications recently added to the new iOS 12.

What you will learn from this course?

In this iOS 12 & Swift Online Course, the learners will learn about the different ways to learn the interface elements, common tools, designs, and coding examples for using the SWIFT. Our institute alumni students have published the app which is evaluated as the best. Learn from the experts about iOS development to create the best apps as per the market now. App for the camera, an app for music, an app for fitness, an app for health, an app for share market information, an app for real estate information are the trending apps in and around the iOS development. Learn iOS 12 & Swift Online Course from the leading institute to create the best apps for the performance.

Who can take this course?

iOS 12 & Swift Online Training is suitable for beginners, developers, architects, and consultants. The real-world apps are examples to create apps with intense knowledge into the iOS Development. With just one course your career path will move in an upward direction. This boot camp is designed to drill in the different concepts of the new version of iOS.

Why should I learn this course from the GangBoard?

iOS 12 & Swift Online Course is designed to deliver the best practices which are undergoing in the market now. The market patterns and designs are included in the syllabus which helps for the creation of the own apps. It is not possible to create the own apps with half knowledge and thus the complete knowledge is very crucial to become successful in the app development.

Our iOS 12 & Swift Online Course give students the opportunity to take classes on your flexible timings. Choose from a number of batches as per your convenience. If you got something urgent to do, reschedule your batch for a later time. The classes can be attended to at any place and at any time as per your choice.

I have Completed my iOS 12 & Swift course from GangBoard and Trainer has explained the concepts in a good and understandable way with real-time examples and also by providing us pdfs. He very helpful for us in doing the project and also cleared all our queries with patience. Overall the experience was good and useful.

My trainer was Arvind, who taught me iOS 12 & Swift. He was so patient and calm with us and took his time explaining everything. He explained the concepts each with a different example and showed us how it works to make us understand better. Even for doubts, he did not hesitate to explain how many ever times we need, even if it is silly. Even after the course is over, if we do have any doubts he tries to reply and clarify our doubts as soon as possible.

I pursued iOS 12 & Swift from the GangBoard. The trainer Lakshmi was efficient and covered all topics that were necessary for the course. the trainer was very knowledgeable on the concepts by conveying real-world examples along with a sample project. Thanks, Lakshmi and GangBoard.

It was a wonderful experience learning from you. You taught us iOS 12 & Swift with such ease and you gave us inspiration in each and every aspect. Mr harsh raj sarsen explained the concepts very good even non IT experience guys also be able to understand. His teaching methodology is unique and every class of his is of a highly interactive session. Thanks to GangBoard.

Recently I completed my iOS 12 & Swift Online training. My trainer Aravindanath is a working professional so he Taught well and gave us all suggestions and good inputs like how the real-time work be like and he covered all topics what he promised on day 1 and now I got the courage to attend interviews, though I need to practice well to perform in interview because cracking the interview is my job.