Selenium with Python Training in Bangalore

Nowadays, Selenium is one of the widely used web automation tools. It is used to perform various automated tests like Linux, Windows, and UNIX systems. It also supports many browsers including Google Chrome, internet explorer, opera and Mozilla Firefox, etc. As we all know, Bangalore is known to be the Silicon Valley of India is the capital and one of the largest IT hub of Karnataka. 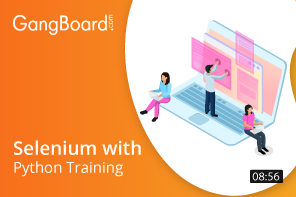 In this course, you will learn about understanding and performing Automation testing. This course has been modified according to the current industry standards and as per the latest trends in the technology. Therefore, thisSelenium with Python Training in Bangalore will even provide you more confidence if you are interested in doing your career in the Testing category. This course will train you on the real web application as well as for executing the industry standards test scripts written using selenium in python on Firefox or chrome. It will enable you to gain in-depth knowledge about Selenium and Python concepts and to gain expertise on them. Through, this selenium Python API you will learn to access all functionalities of Selenium with Python training in an intuitive way. Selenium with Python classes in Bangalore provides a convenient API to access Selenium Web Drivers as well.

Selenium with Python Training in Bangalore

The training is Bangalore is provided on weekdays as well as weekends programmes depending on the requirement of the candidate. Also, Selenium with Python Certification training in Bangalore conducted on day time classes, evening batch classes, and fast track training classes. The participants would be trained for installation, navigating, waits and web driver API in a practical way with examples. The fee for the selenium with Python training in Bangalore is very moderate. According to the recent survey job portal sites like Naukri, there are companies looking for professional of selenium with Python in Bangalore. These companies are Aroha Technologies, TRH consultancy, etc. As more and more applications are moving towards cloud, therefore, jobs of web automation are more in demand.

The course objectives are:

Some of the job roles are mentioned below that candidates can expect after successful completion of selenium with Python Training in Bangalore:

Upcoming Batches for Selenium with Python Training in Bangalore

Our Selenium with Python Online Course gives students the opportunity to take classes on your flexible timings. Choose from a number of batches as per your convenience. If you got something urgent to do, reschedule your batch for a later time. The classes can be attended to at any place and at any time as per your choice.

Selenium with Python Exam and Certification

GangBoard Selenium with Python Training in Bangalore View 9 Locations Nearby