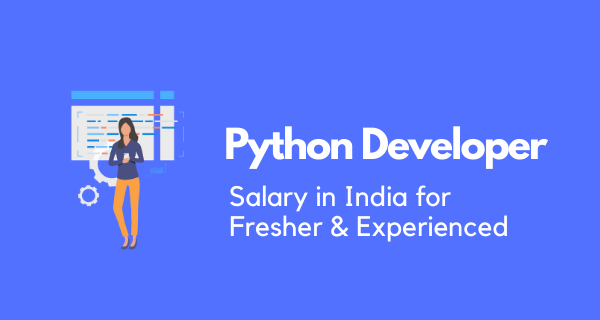 Welcome guys! Eager to know the Python Developer salary in India for both fresher and experienced professionals?

Before diving into the topic, I should let you know about the impressive statistics on Python and why they are much popular and ruling the market at present.

Were you surprised by the Python statistics? Yet to get wondered more! Let’s move further and look in-depth about the Python language and the Python developers salary in India.

Python is a versatile, object-oriented, and high-level programming language that holds dynamic semantics for application and web development. It’s modular style design, and unique syntax helps users to learn them fast and stress-free. As a developer, you will find the Python easy to read and translate their code when compared to other languages.

Who is a Python developer, and what they do?

Why are Python developers paid more?

I have come with a beautiful survey that lists why Python developers are paid heavily. According to Stack Overflow, Python is the top for most questioned language, and its fierce competitor, JavaScript, falls after the Python. GitHub also ranked Python as the first in the popularity race. I have attached the below image for your reference.

Why should you learn Python?

Here is the top reason I have listed below why learning Python is vital for your career.

I have come up with the top three job roles of Python developers who are getting paid heavily in the market.

Machine Learning and Artificial Intelligence have turned as the umbrella terms for various applications that are applied to technologies and disciplines. Some also include developing chatbots, web development, data analytics, robotics, intelligent application development, and more. ML and AI have increased their use after the late 2017’s. Frameworks like TensorFlow, PyTorch, and OpenCV is merely the buzzwords used for present ML/AI enthusiasts.

What does a Machine Learning/Artificial Intelligence Engineer do?

The responsibilities of Machine Learning/Artificial Intelligence Engineer are

According to Payscale.com, ₹671,548 is the average annual salary received by an Artificial Intelligence/Machine Learning engineer in India. If the professional holds less than one year of experience, they will get a pay of ₹500,000 per year, and considerably, this falls to be the highest salary for entry-level developers in India. ₹672,106 per year is offered for the new level machine learning engineers, which varies based on the demand, location, and Skillset. A mid-level engineer receives an average salary of ₹1,173,074 per annum and two million rupees per annum for the senior-level engineers.

Click Here – To Know Why Python is popular language used in Machine Learning?

Data Science is nothing but statistics executed using programs. Government agencies and businesses are looking to hire professionals with data science certificate for their companies. Data scientists can help enterprises solve any type of problem, like national security threats, easily share and extrapolate insights. Data Scientists, along with business stakeholders, work to identify the company’s right goal or business and then come up with the right strategies in using the data in the right way to achieve the primary goal. They create, design, and develop data modeling process, predictive models, and algorithms to extract the business requirements. It helps in data analyzing, and also the insights can be shared with their peers.

The salary range of Data Scientists in India

Django is one of the open-source, high-level Python web frameworks developed to complete the deadlines and satisfies the broad requirements of a web developer. Python Django provides a pragmatic and clean design along with delivering faster development. More companies are making use of the Django for its flexibility, scalability, reliability, and simplicity. Django is merely the secret ingredient behind various popular applications like Prezi, Eventbrite, Mozilla, Dropbox, Bitbucket, Disqus, YouTube, Spotify, and Instagram.

Here are some of the critical roles of the Python Django Developer.

Python Django Developer salary in India completely varies depending on various factors, including the job role, reputation and company size, location, Skillset, work experience, educational qualifications, and more. According to Payscale.com, Python Django Developer’s salary in India is about ₹6, 04,000 per year. A Python developer with one to two years of Experience will receive an average amount of ₹2, 00,000 to ₹ 4, 00,000 per annum.

Below is an image from Indeed.com that represent the average annual salary based on different languages. You can see Python ranks the top in the race.

Python Programmer Salary in India based on location

According to Indeed.co.in, the average salary received by a Python developer is about ₹ 4, 60,633 per annum in India. The below table represents the Python Full Stack Developer Salary in India as per the location.

Python Programmer Salary in Other countries

I have attached a tabular column below that shows the average Python developer salary monthly in different countries.

Python Programmer Salary in India based on Skillset:

According to the survey conducted by CV Compiler, here are the skills and knowledge needed for the Python developers at present to acquire more salary. I have also attached an image below for your reference from the source.

Python Full Stack Developer Salary in India based on Experience:

Python Developer salary depending on the Job Roles:

There are several job roles available for the Python professionals, and here are some of the top job roles that get paid more in the market.

According to Glassdoor.com, the average salary received by Python Developer based on the job role includes

I hope you guys are now clear with our article, Python Developer Salary in India. The above numbers will increase in the upcoming days, and therefore it’s the right time to start your career with Python if you have not yet decided.

Any queries on our article Python Programmer Salary in India? Please make use of the comment section, and we will get back to you with the right answers for all your queries.

You can enroll our Python Online Training with our lifetime access and 24/7 support.