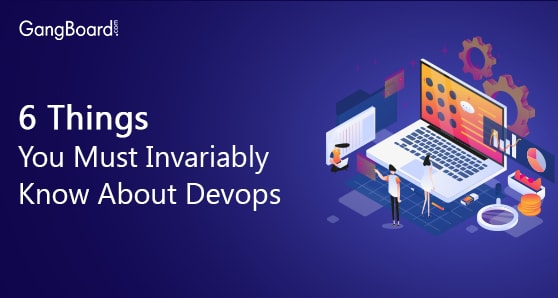 6 Things You Must Invariably Know About Devops

6 Things You Must Invariably Know About DevOps

The concept of devops dwells on the principle that IT operatives and software developers should work for hand in hand rather than working in isolation for more fruitful results. And the advocates of this concept often claim that a lot of deployment time gets saved in the process.
DevOps is definitely the order of the day, and no matter whether you are a small-scale Web 2.0 company or a prolific business, you should know the following 6 things about DevOps;

DevOps is not just technology

One thing that you learn by adopting devops is that it’s not merely a technological innovation but something that also depends heavily on people and culture. The biggest challenge in implementing devops lies not as much in bringing software development and operations together, as in bringing them together in a seamless manner. It is quite challenging to have these groups think alike about an application and its implications on operations. The best and easiest solution to this problem could be to make them realize that they share the same chunk of customers and goals. In short, software developers should be encouraged to learn more about operations and vice versa.

People associated with devops often say tools have no contribution to their functioning. But very often they are also seen talking about their favorite tools. One thing that needs to be kept in mind is that there is no one-size-fits-all tool as far as practice of devops is concerned. The best outcomes are achieved from the deployment of a collection of tools providing services ranging from application portability to configuration management. Starting from continuous integration to delivery and testing, almost every DevOps phase is reliant on tools.

Devops is much more than just development and operations

For devops to succeed as a practice, a lot of stakeholders other than software developers and operations experts need to approve of it. DevOps also calls for the involvement of people who are not even distantly related to codes. And that is why it may be asserted that for the fruitful implementation of the devops way of working, the combined support of professionals from areas like database administration, security, QA, sales and CRM, and business intelligence is desirable.

And you get speed

One of the major reasons why companies are choosing to go the devops way is that it brings a lot of agility to the table. Before the inception of devops, even a small piece of software building task could take weeks on end. But after its advent, things happen much faster. In fact, as people got used to the tricks of the trade, the time required got reduced further. But all the swiftness can cause trouble if processes like quality assurance and automation are not handled properly.

Measuring the success of devops initiatives is difficult. Why? Because devops is not a formal framework. It’s more of a culture. Although difficult, measuring the success of DevOps is extremely important because it targets the areas that determine how IT performs. And to make sure devops yield desirable results, its culture, agility, and quality should be treated with a metrics-oriented approach.

It’s not unlikely for you to come across job postings in newspapers and job sites looking for devops operatives. In reality, DevOps isn’t a job; it’s a way of working that drives performance. People advertising such jobs are either not familiar with the concept of devops or are disseminating wrong information.
These are a few things you need to know about DevOps- the new IT philosophy.

What is DevOps? Introduction to DevOps | Roles | Payscale | Certification