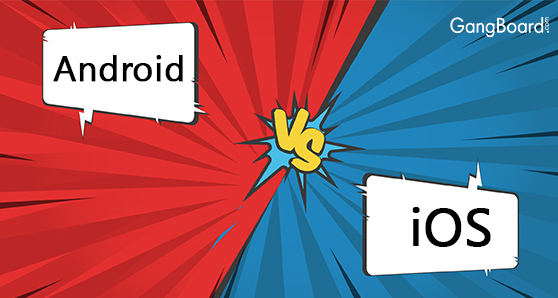 Since the advent of technological advancements on touch screen mobile phones, the debate between Android phone users and iOS mobile users is one of the most prominent one in the modern world. Both are operating systems that are infused with a lot of applications and functions that are cherished by its users.
If you haven’t yet used any of these devices, you certainly will be having a hard time selecting one. That is exactly what this article intends to do. We will be providing you with a detailed list of differences between Apple vs Android. We have done thorough research to come up with the answer to one of the most debatable questions in the modern technological world.
Click Here to Know about-> What is Android?

A list of all the major differences between iOS vs Android is mentioned below, you may go through this to get a quick overview of what’s in store.

In-Depth Comparison of Android vs iOS

Whatever you choose, Android or iOS you can be certain that the device will offer you excellent service. You might even consider them both to be the same. Just to be a little more sure about what you are looking for a detailed discussion on both the operating system’s major inconsistencies and the difference between Android and iOS are given below.

The hardware on an iOS device is fully manufactured and owned by the Apple company. This means you can be sure of getting premium quality hardware and support almost every time. The company focuses primarily on style and simplicity.
On the other hand, there are several brands make mobile devices hosting Android operating systems. This offers you a wide range of style and builds quality. The premium brands of Android OS can easily compete with the top Apple mobile devices. But as you move lower in the range you get cheaper build quality and features. With Android, it is just a matter of price and the better you pay the better you get.

The Android OS is notorious for not letting out updates to most devices. You will find a number of Android brands that still not have the latest updates. You might even find some phones not even supporting the latest updates.
Comparatively, iOS devices are offered better support for older devices and have regular updates for all their devices. To be certain that you have the latest iOS update all you have to do is get the latest Apple device. The Android on the other hand only rolls out the updates on select devices. Android or iOS, both of the OS has its ups and downs when it comes to technicalities.

The Google Play store is the stock application store for Android. A wider array of applications and utility services are offered here. Developing applications for Android is a real headache for the developers as the applications have to be made while keeping in mind the dimensions of different Android devices from different brands. Also, security is a major concern as a lot of fake applications are available on the store.
Apple has a tight grip on what it hosts on its App Store. You won’t find any duplicated applications and you can be certain that all of the apps are secure. Moreover, Apple devices are consistent in size and hence developers can easily design applications.

The support on both platforms is good. However, with the Android operating system, you have a wide range of hardware application and hence support on a broader scale is required. This is often neglected and troubleshooting methods for only selected Android devices are available on the market.
On the other side, with Apple, you are certain about the device structure and hardware hence a more personalized support system is made available to you. If your iOS device shows irregularities you can just visit the nearest Apple store and get it fixed, unlike Android OS where you have to find the exact brand store to fix the abnormality – another significant iOS vs Android factor.


Get Prepared for Android Interviews !

The Android operating system has at the moment one of the best personal assistants in the form of Google assistant. It keeps you in touch with almost all aspects of the application that Android can provide. From getting you live traffic updates to taking care of your appointments on the calendar, the Google Assistant proves to be one of the best features of an Android operating system.
The Apple virtual assistant is named Siri and with consequent updates, it is up to the profile of Android’s Google Assistant. It does comparatively simple tasks and still isn’t updated enough to match the complicated workings of the latter.

One of the biggest advantages of being an Android user is its customization. This feature becomes even more prominent on Rooted Android devices, it basically opens up the whole device to customs updates and modifications. Android is the right choice for you if you are looking for control and value that over elegance.
Apple has a strict policy on customizations and there is not much that you can do with this operating system. The device will make up in its precise attention to detail and quality apps developed exactly for the device. If you are someone looking for flexibility in choices then Android is the way to go otherwise iOS is your best friend.

The initial machines that hosted iOS and Android operating systems didn’t have a lot of storage space or battery capacity. You would have to recharge the device several times a day. Nowadays the situation has changed for better and you can go for days without charging your device.
However, if you want to change your battery or increase your storage space, you won’t be able to do that on iOS platform devices owing this to their strict policies. On the other hand, most Android devices allow you to change or upgrade both storage space or batteries.

This is where iOS makes up for all of its loss in customization features and other limitations. As the operating system is wholly controlled by Apple you can be certain that almost anything that goes into the device is safe and has to be safe. You won’t even find a single malware application on the Apple Store also.
Android users are traditionally the major targets for malware apps. The liberal policies of open ware customization and other such features compromise Android’s security. You have to be alert all the time while using an Android device. All of the security aspects are dependant on how you take care of the device.

If you are still confused which is better Android or iOS, this factor will help you decide one. Generally, the iOS devices cost higher than the average Android device. But the cost is justified because of the exclusivity of the device. The Android devices, on the other hand, has a wide range of choices and hence the price. You could find absolute cheap Android devices to the most luxurious ones.
As mentioned earlier, most of the times with Android the better you pay the better you get.


Get Prepared for iOS Interviews !

Difference Between Android and iOS Features

The general features of both the operating system devices are mentioned below that will help you find the winner in Android vs iOS.

Keeping the Android vs iOS pros and cons in mind, both the operating system fare well when it comes to doing all the basic functions required from the device. The difference of opinion arises when it comes to the added features of the devices that support these two operating systems. The Android system, in general, has traditionally offered greater control and flexibility over its components while the iOS operating systems are most elegant and secure.
In the end, it will depend on your preference whether you want to control everything your phone does or have better security. Hope this article helped you create a better picture of what you want and cleared most of your doubts.