Home Blog App Programming and Scripting Which is the best data science tool to learn? SAS, R or Python 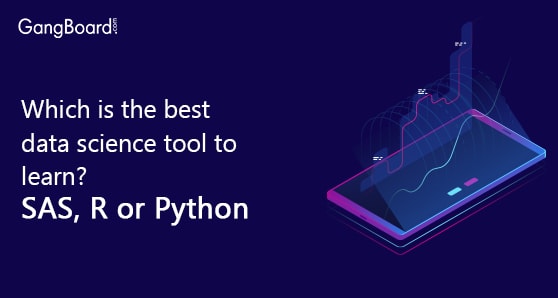 Which is the best data science tool to learn? SAS, R or Python

For young professionals, who would want to enhance their skills in data science and companies that build advanced analytics capabilities, the foremost question that pops up on their mind would be whether to choose SAS, R or Python. With all these three analytics tools delivers the best results on what they are set to do, it’s quite a difficult task to choose anyone of these. However, one can select any of these technologies based on key aspects such as nature of business, efficiency, future outlook etc.
Here are some of the important factors to be considered while choosing any of these three tools to learn;

This is one area where both R and Python are one step ahead in data science field. As they are open-source tools, these technologies have been witnessing a phenomenal rise of usage in recent times.
On the other end, SAS is expensive licensed software. However, it offers excellent support, particularly in difficult scenarios and important areas. But, when it comes to cost, it’s been out-of-pocket, for many small-scale companies, especially startups.
On considering the cost factor, R or Python has been the most preferred analytics tool among small organizations and mid-sized companies. An organization that focuses on advanced analytics mostly prefers R. On the other hand, Python Training is preferred by tech companies largely, as they would demand end-to-end integration, leveraging analytics-friendly libraries and create analytics-based applications.
This cost factor is considered to one of the prime reasons how R and Python outshine SAS and we expect this trend to continue in future.

When compared R and Python, SAS is the easiest to learn. The aspirants who don’t prior knowledge in programming can also learn it with ease. Besides, learning SAS is child’s play for the individuals with an ability to parse SQL codes, combined with macros and other native flavors.
R is considered to be a steeper learning curve when compared to Python Training and SAS Training. As R is a low-level programming language, it would demand experience and some programming orientation. If this program is managed skillfully, even a minor task may look very difficult and would require complex lines of code.
Though it is originally a scripting language, Python is one step ahead in terms of simplicity and flexibility that it gives to the users. Also, the intuitive syntax is an added advantage in Python. Also, with analytics-friendly libraries, Python has emerged as one of the most preferred data analytics tools in recent times. Even though it is easy to learn, it does take more time to become a master in it.

When it comes to date management on standalone systems, SAS is considered to secure, efficient and better.
As we are witnessing an increase in our data sizes, we have to meticulous about the software that we use. As R world only on the RAM, even a small exercise would take a lot of time to run depending on your PC’s RAM. But, data manipulation is easier in this software.
With extensions like Panda and Numpy, data handling and basic analysis works smoothly in Python.