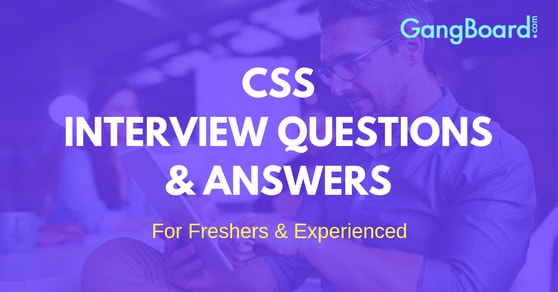 In case you’re searching for CSS Interview Questions and answers for Experienced or Freshers, you are at the correct place. CSS (Cascading Style Sheet) Questions and Answers provided here covers almost the entire basic and advanced CSS concepts along with examples. CSS is one of the top important features for web development process. Both basic and advances portions are handled and posted as questionnaires just because of CSS experts. To crack the web developer interviews and become a best web developer, go through the entire questions on CSS. To create an attractive website or to pass the interviews, gain some knowledge on CSS vital topics like types of CSS, CSS Style components, available selectors, different attributes and how to use them, available tools, usage of preprocessor, variables and functions. Roles like UI Developer, CSS Web Developers, Web Designer, and Front-end Developer are highly benefited with this set of questions and be a remarkable professional. GangBoard offers Advanced CSS Interview Questions and Answers that assist you in splitting your CSS Interview and procure dream vocation as CSS Developer.

Answer: It expresses the vertical order of element.

Q2) What is position: Relative?

Answer: If the element has position as relative that places the element from current position.

Q3) What is position : Absolute?

Answer: If the element has position as absolute that will place the element depends upon it’s nearest parent element.

Q4) What is Inline element ?

Answer: It has no line break and we can’t set height and width of the element.

Q5) What is block element?

Answer: Line break will be there for block element and we can set height and width of the element.

Answer: It has no line break and we can set height and width of the element.

Q7) What will visibility:hidden do ?

Answer: Element will be hidden but it will add space in UI.

Answer: Element will be hidden and it won’t add space in UI.

Answer: If we used width and we are resizing the browser to the smaller size , then Scrollbar will be added .To overcome this , we are using max- width.

Answer: If the scroll bar is needed , then it will add scroll bar.

Answer: It allows us to include the padding and border in element total width and height.

Q15) What are available in CSS Box Model ?

Answer: It consist of padding , Border , margin and content .

Q16) what are different types of styles in CSS?

Q17)What are the different types of CSS selectors?

Q19) Choose the correct statements from the below, regarding id and class attribute?

Q20) A web developer wants all the paragraphs text in the HTML page to be appeared in red in color. Which of the below CSS code is appropriate to achieve the above requirement?

Q21) What are the valid values of the CSS attribute font-style?

Q23) Which of the following is the default value of position attribute?

Q25) Which of the below CSS property allows you to skew, rotate and translate an element?

Q26) Which HTML element is used to define style to an HTML page?

Q28) Identity the correct syntax that modify the style of <b> to display text in green color & underlined?

Q29) What is the attribute which we use in CSS for changing the background color of the page?

Q31) When all the different ways of adding style is present in a HTML file, then which among the following will have highest priority for a given tag?

Q33) In media queries, comma separated lists acts like logical operator ____ and styles get applied if any of the media queries returns _____.

Q35) Which are the logical operators used to compose media queries ?

Answer: and, only, not

Q36) Which of the following is true about CSS ?

Q37) The web developer has been developed a website where the styling gets changed very frequently. Which way should Jack use for specifying style sheet?

Q38) Which of the following statements is TRUE for CSS?

Q39) Which of the following is/are component/s of CSS style rule?

Q40) Dilraj has developed a website for his organization-x. The end users of the website would be viewing the website across different browsers. Hence Dilraj wants his website to be consistent across all the browsers. So Dilraj wants to nullify the browser styling by preserving basic styling. Which open source css file should Dilraj use?

Q41) Sourav has developed a website for an organization.  The website contains 3 levels of headings. According to the styling guidelines provided by the organization all the headings of the website should be capitalized. Which of the below styling statement should Sourav use to achieve this requirement?

Answer :  CSS stands for Cascading Style Sheet and it is used to design webpages

Q44) In how many ways you can integrate CSS with your webpage?

Q48) What is universal selector?

Q49) What is the difference between class and id selector?

Answer : It is used to determine the layout of elements

Q51) What is float property in CSS?

Answer : It is used to move the whole container to the left or right with the texts to be wrapped arownd it.

It is used to specify the stack order of positioned elements that may overlap.

Q53) What is the difference between display:none and visibility:hidden?

Q54) What are the different types of position properties?

Q55) Name some pseudo classes that we use in CSS?

Answer : A pseudo class is used to define the state of an element

Q56) Name some of the pseudo elements in CSS?