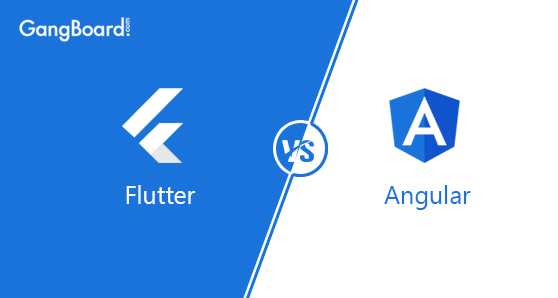 Are you very excited as a technical person learning the new term “Flutter” in the IT industry or the term is just a hype? ‘Angular’ is still in the market, then why ‘Flutter’?
If you are looking for the answer to the above questions, then your search should end here. We will help you quench your thirst about the new terms, the functionality and detailed comparison between Flutter and Angular.
Well, to start with we should consider and rethink about comparing Angular and Flutter! Why we are comparing only these two terminologies? There must be other technologies that we could compare Flutter with. The answer is both the frameworks are developed by Google.
Throughout almost a decade the ruler of the industry as a framework is Angular. This is the most vastly used term in the IT industry. You don’t need to be a developer to know about the framework names. This Angular framework is equally popular like other frameworks used for other programming languages like Java and C#.

Then why Angular came into the picture?

Before this answer you should be filled with what is AngularJS or Angular, then it would be easier to understand why!
AngularJs is one open-source structural framework to develop dynamic webpages. Simply to make you understand it creates webpages with ease using dynamic codes. Now to fill in why did Angular get the popularity?
In 2010 Google came with this terminology as a framework to develop webpages with ease. The reasons they delivered behind it, are.

Any APIs you use, when there is a situation that you have a dynamic application with static documents, you call it Impedance Mismatch.
It can only be solved with

The collection of Stored Function to write Webpages.

A collective implementation of the directed web application which has complete control over your code and only calls it while filling in the particular, it needs something app-specific.
AngularJS came into the picture and given an approach to minimize this rule of Impedance mismatch by extending its reach towards static HTML ( Hypertext Markup Language) documents and application needs. It started getting a grip on Front end technology while directing the web browser by creating new Syntax (programming derivatives) through HTML construct. It is, what we call Directives.
Now, this new approach of AngularJS and as it is an Open source application framework, it got its popularity worldwide within a few months. It gives you the flexibility to opt for developing the front end development and testing at the same time with ease. It gives a thousand reasons to the client-side resolution of any application by simplifying development and testing in MVC (Model-View-Controller), MVVM (Model-view-view-model), MVW (Model-View-Whatever) architecture.

In 2015, Google again came with another framework, what they named “Flutter”. A framework is nothing but the pillar of every application’s implementation. Flutter came into the picture but was not very stable at the first go like ‘AngularJs’.

Probably Google is looking for a long-term solution for the cross-platform framework. Angular is a Hybrid Framework and good to build an application; may it be for Microsoft OS or IOS. But it is getting complex for developers to create applications specific frameworks for Mobile while they are more prone to use Angular to create applications for desktop or laptop type OS.
When it comes to Mobile, one platform-specific work can be done by Angular but for other platforms, the application should be built from the scratch by the same syntax but different way, due to the different functionality of OS.
You can use other cross-platform frameworks to build new applications for different OS, eg. Xamarin, React Native, React JS, Cordova, Ionic 2. The developers are more prone to learn and use these frameworks as a tool to build new applications depending on the client’s specification.
Simply to make you understand, if Angular is used to make an application for Android and then it needs to create the same application for iOS, it should be rebuilt from scratch.
Here comes Flutter. The most usable framework to build applications to work with cross-platform functionality. This is highly usable in 2019 that more than framework it is widely known as “Flutter SDK”.

In every decade there would be a framework that will lead the IT industry towards the development of next-gen technology. Flutter might take this place soon as it is worldwide ranked no 3 just after Angular7.
Though from the scratch the journey and early phase was not that much stable for Flutter. In 2015 it started its journey while it was all developed some applications in Google Fuchsia OS. Getting you into Fuchsia: This is probably the next-gen OS tech developed and run by Google after Chrome OS and Android.
Though Flutter was utterly developed for Fuchsia, They did not name it as Flutter as they were running the application made by this framework on Android. The first version of it is codenamed as “Sky”. It got its popularity only after 2018 when it came with the Flutter 1.0 version of it, which is more stable in form.
The Flutter Architecture is vastly usable because it has four components that create its platform as “SDK” more than just another framework. Whereas AngularJS or Angular had started its journey with only as UI building blocks with different functionality as core components (Type component, function component, service component, provider component, filter component, etc.).
Flutter Components are-

Above mentioned terms are not easy to describe within a few words, but which must be mentioned here is Dart Platform.
Dart is a programming language more than a platform, it’s the platform for the basic architecture of Flutter. Dart is an object-oriented programming language, which has some other characteristics too. It is a Class defined and garbage-collected language. You can get a very close similarity with Java.
Dart is developed and defined by Google though it has a syntax that has a very close similarity towards the style of the Programming Language C.
The Angular is written and developed by windows Typescript and Angular framework can use JavaScript and JavaScript libraries to define the Function from 3rd party sources to develop applications.

Angular with its most stable form now and with admiration of regularly being upgraded of its functionality being checked now and then; has certification course acceptable worldwide.
It gives you innumerable opportunities towards the development of Angular JS. In future, if you want to stick to it and being a developer wants to create your path to RND of Angular; GangBoard has their separate online training course especially for Angular.
To make a quick check, kindly give us a call on +91-755 022 6991 /+91-984 025 8966.
Though Flutter as Framework and ‘Flutter SDK’ has just started their journey, Google has not yet come up with any certification courses till date.

Must Read: AngularJS Vs VueJs

Must Read: NodeJS Vs AngularJs

Must Read: NodeJS Vs RecatJS Vs AngularJs

As Flutter has just arrived, it has created lots of buzzes worldwide among developers and architects. It is flushing the developers to create mobile applications with less time without being dependable only with Angular7 or other multiplatform tools.
Though it is not that much tested on apps with the issue of safety. Whereas Angular has already created its dependency on developers due to its safe maneuver. Though Flutter is not in its end state, so lots of scopes to develop the technology is there.
Most of the Forums are giving attention to the state Flutter is in and speculating it to be killing other Framework dependencies. Multiplatform development of apps is the sweet-spot for it to create this hype. Though killing other Frameworks for their use is still arguable.

How will this framework learning will boost your career?

In a very short way, most of us, we are in the era of digital booming and mostly using smart devices or maybe computers. If you are a technical person, this new technology will change the course of your career. Most of the IT Companies are now hiring Frameworks of Certified professionals. Learning these new technologies will educate, create, achieve and excel your path towards success.
It is one of the most valuable technology courses which gives you new dimensions in this technology era.

Before summing up a few words to import:

GangBoard is the No 1. Certification of Online Training organization. They have more than 10 years of experience in this IT field, where they always hire the best market professionals to train the developers about the new technologies which build their career.

Sustainable career development option starts with them and their course. Flutter, Angluar7 and Angular 8 are the latest courses they offer their training with, recent years.
This is the golden opportunity to learn from the best in the market and achieve a new career ahead with Flutter and Angular.