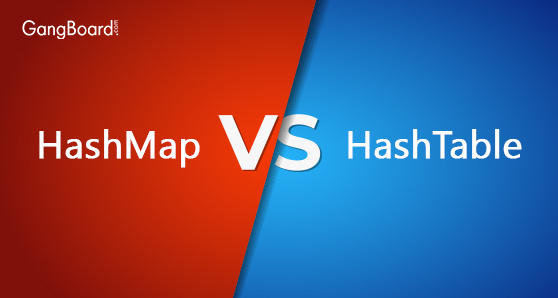 HashMap Vs HashTable in Java

Are you preparing for an interview for a Java profession? You must understand the differences between HashMap and HashTable as it is an important interview question for any Java professional to kickstart the career. Though both HashTable and HashMap store key-value pairs and implements the same Java interface: java.util.Map, they differ with their usage and working.
There are two interfaces namely Map and Set in Java. A Map is used to map keys to objects (one object set to another). A Set is just a collection of objects and has no other structures.  Both HashMap and HashTable implements Map whereas Set is implemented only by HashSet. All the three: HashTable, HashKey, and HashSet use hashing technique for objects or keys.
Let us discuss the differences between the HashTable and HashMap classes in this section.

HashMap is not threaded safe and not synchronized. HashTable, on the other hand, is synchronized and thread safe. If you are doing a multithreading task, it is better to use HashTable and HashMap works best for non-threading or individual applications that are not synchronized. Multiple threads can access HashMap and process it simultaneously. HashTable, on the other hand, cannot be accessed by more than a thread at a time (synchronization). A lock is acquired by the thread which is currently using the HashTable and all the other threads are made to wait until the thread completes its operation and releases the lock.

It is a common rule that unsynchronized applications run much faster than synchronized applications. Thus, HashMap is faster and uses much lesser memory space when compared to HashTable. HashTable must be avoided as it is a legacy class and the performance is slower than HashMap. Method level synchronizations cannot be removed from HashTable (until you break the code) and thus the HashMap was developed in the future.

Differentiation Between HashTable and HashMap

Similarities Between HashTable and HashMap

Both these classes, HashMap and HashTable implements the same Map interface.

Both HashTable and HashMap uses the hashing mechanism for working.

Neither HashMap nor HashTable guarantees a constant order of map over time. If you want the order of objects to remain constant with time, use LinkedHashMap.

Constant time performance is provided by both HashTable and HashMap assuming a uniform distribution of objects over a period of time.

Duplicate values are allowed in both HashMap and HashTable.

0 responses on "HashMap Vs HashTable"