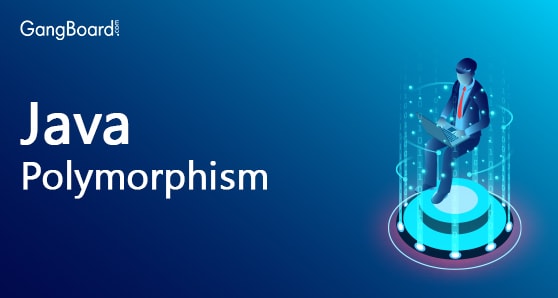 Java polymorphism is an idea of performing one action in many ways. Two Greek words “poly” meaning many and “morph” meaning forms combine together to make polymorphism.

Polymorphism in Java is accomplished by method overloading and overriding.

Method overloading comes into picture when a class has various methods with same name yet different parameter. For example you could create a method to multiply two integers and three integers. In this case, you could have same method name but parameters will be different in both cases. For first method, signature could be multiply (int, int) and for second method, signature could be multiply (int, int, int). Based on number of parameters passed, that specific method would be called. This is how Java accomplishes compile time polymorphism. Method overloading could be achieved by either changing number of arguments or changing data type.

This is also called static method dispatch. In this type of polymorphism which overloaded method should be called is decided at compiled time. It is used for method overloading.  Since the response to method is known at compile time, it is called compile time polymorphism. It is also called early binding because of early awareness of compiler about the methods having same name and knowing which one to call.

Example of compile time polymorphism: Let us take the early example of multiplying two and three numbers. So here we will have two definitions of multiply method and which method will be called is decided by the parameters passed at the compile time.

This example represents method overloading, where a method with same name has been used twice with different parameters. In this example, when multiply method is called with two arguments passed i.e. 1 and 2, int multiply (int first, int second) is called. When the same function is called with three arguments passed, int multiply (int first, int second, int third) is called. Since which method should be called has been decided before execution, at compile time, it is called compile time polymorphism and early binding.

This is also called dynamic method dispatch. In this type of polymorphism which overridden method should be called is decided at run time. It is used for method overriding.  Since the response to method is known only at run time, it is called run time polymorphism. It is also called late binding because of late knowledge about the methods having same name and knowing which one to call.

Example of run time polymorphism: Let us take the example of a method used to print a message in parent and child class. So here we will have two definitions of message method, one in parent class and another in child class and which method will be called is decided by the object used to call the method at run time.

when object1 calls the method message output will be: