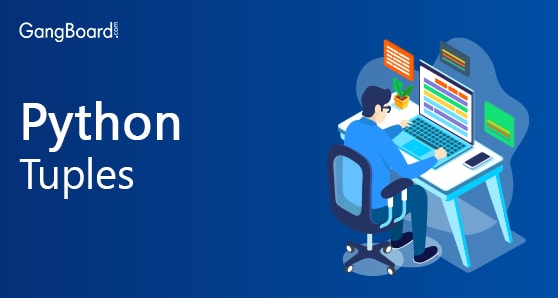 What is a Tuple in Python?

A tuple is a collection of Python objects that are ordered and unchangeable or immutable. Tuples are similar to a list in that, both have a sequence of elements that can be of different data types (integer, string, float, etc.). The difference between the two is that tuples cannot be changed. Once a tuple is created, its values cannot be updates or changed. A Tuple is same as lists used to store sequence of objects separated by comma enclosed with parentheses. The value of items stored in the list can be mutable while the tuple is immutable. Tuple is mainly used for to protect data.

Tuples use parenthesis () unlike lists which use square brackets [] to hold elements. The parenthesis is optional; however, it is a good practice to use it. The elements are separated by using commas between them.

Accessing values in a Tuple

An element or value in a tuple can be accessed by referring to the index of the element inside square brackets as shown below.

You can loop through the elements of a tuple by using the for loop.

Tuples cannot be updated or changed but you can combine or concatenate tuples to create a new tuple which contains elements of existing tuples as well as new elements if you decide to add them. This can be done by using the plus + operator .

Deleting elements in a tuple

As tuple elements are immutable, you cannot delete individual elements in it. If you wish to delete an entire tuple, that is possible by using the del keyword. The following example shows an error after the tuple has been deleted because it no longer exists.

Checking if an item exists in a tuple

To check if an item or element exists within a tuple, you can specify the name of the element followed by the in keyword and tuple name.

Check number of items in a tuple

You can find the number of items in a tuple by using the len() method.

Multiplying or duplicating an item in a tuple

The items in a tuple can be multiplied by sing the multiplication operator * following the number of copies you want to make.

OR
If you want to multiply a specific item in a tuple, you should add a comma next to the item for the copies to be produced as individual items and for the item to be considered as a tuple and not a string.

A subset of elements can be chosen by using slicing. This can be done by specifying the index range.

Slice a tuple from a specified start and end range

Elements in a tuple can be sliced from a specified range. The start and end index are separated by a colon. The following example specifies that the element must start printing from index 0 and stop at index 3 where index 2 will be the last element to be printed. Similarly, you can also use backward indexing for the elements to start indexing from the last element.

Elements can be sliced from a specified starting index till the last element as shown below with two colons after the start index. Otherwise, you can print all the elements by simply adding two colons without specifying any index before or after.

Slice a tuple by printing alternate elements in a tuple

Slicing a tuple in reverse order

Elements in a tuple can also be sliced to show in reverse by using backward indexing.

Methods of Tuple in Python

The count() method can be used to count the number of occurrences of an element in a tuple.

In order to return an element with maximum value, the max() function can be used. Likewise, in order to return an element with minimum value, the min() function can be used. While using integers, the max() and min() method returns the maximum and minimum integer respectively. While using letters, the max() function returns the string that begins with the further most letter in the alphabet starting from Z and moving down to Y,X,W and so forth, while the min() function returns the nearest letter starting from A and moving up to B,C,D and so on.

We can compare two tuples with relational operators.

You can add tuples within a tuple to create a nested tuple.

Converting a sequence to tuple

A sequence can be converted to tuple by using the tuple() function. The type() function can be used to check the data type. The following example converts a list to tuple.

While packing, values are placed in a new tuple. While unpacking, those values are extracted back into variables.

We can acces a range of elements from a tuple by using colon (:).

The construction of tuples uses () with elements separated by commas. For example:

Create another tuple from existing tuples u and v

lets verify the datatype for the above for element in w:

creating tuple from another tuple

Tuples have built-in methods, but not as many as lists do. Let’s look at two of them: