Home Blog App Programming and Scripting What is Node.js? 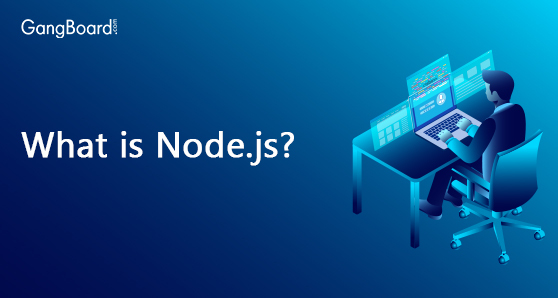 Node.js is server-side JavaScript.
The advantage of being able to write client side and server side with the same JavaScript is great. In addition, it has attracted attention in recent years because it may help to improve performance.
I don’t intend to give you a Nodejs tutorial here, but give you a bird’s eye view of it.
JavaScript is a programming language developed to run on a browser. The main task is to add motion to the page on the browser. For example:

These movements are made with JavaScript.

Actually, JavaScript works not only on the browser but also on the server side. It can be used in the same way as PHP and Java.
It is called server-side JavaScript, but among them, Node.js is typical. There is nothing else famous so far, so you should recognize that it is “Node.js = server-side JavaScript”.
Leading IT companies such as Microsoft and Yahoo! recommend Node.js.

In recent years, JavaScript has come to the forefront of the Web. The reason is that Flash has disappeared and PC performance has been rising year by year. Rich sites and web services are appearing more and more.
Even web designers who don’t understand server-side are forced to touch JavaScript.
That’s why server-side programs can also be written in JavaScript, which is why it’s attractive, and it is in the limelight.
It is efficient if you can write server side and client side with JavaScript. You should employ only engineers who can write JavaScript.
Node.js is the core of Manhattan (PaaS on Yahoo!). It allows you to build one code base using one language-it offers limitless opportunities and possibilities for developers.

So how can you really use it so conveniently?

Unfortunately it is not a dream tool. It’s also hard to imagine how Web designers are using Node.js. It’s totally different from PHP, etc.
First of all, the explanation that Node.js is a server-side program is not accurate. More precisely, Node.js makes it possible to execute JavaScript on the server side.
It looks like Apache’s Web server for PHP, but Node.js can build servers and run application programs as well.

Where Node.js can be used: Real-time Web

For example, Node.js is very strong in fields such as real-time Web.
Real-time web is the field of web that requires real-time response. It is easy to understand Facebook messages and Google spreadsheets, Twitter, Instagram, Snapchat, Paypal, etc. are also examples with high real-time capability. Various chat tools are also a good example.
However, for example, developing chat applications in the Stack is not easy.
It requires constant connection between web browser and web server.
It is necessary to keep saving data and keep displaying on the web browser side.
Due to these problems, it took more than necessary for the user to see the chat screen.
Node.js makes it easy to implement a function that informs you that “new information has arrived!” If you receive an announcement, just reflect it. Chat service, etc, can be made easily.

Locations where Node.js can be used: Locations with many accesses

The first goal of Node.js is to provide a simple way to create scalable network programs.
Scalable means extendable.
Programs like Java and PHP create a new thread for each connection. When calculated with 8GB of RAM, the maximum number of users who can access is less than 5000 users. If you want to increase this, you have to add more computers.
Node.js is one of the few programming languages that solves this problem. It can handle this problem by performing asynchronous processing in a single thread. (It doesn’t matter if you don’t understand the meaning. Only grab the atmosphere.)
However, there is no strong image except simple processing. It is also difficult to say that speed is generally not fast.

As I mentioned a lot, Node.js is safe to use for a small, flexible Web application. It’s especially good for apps that need real-time capabilities.
In fact, the access-majority problem has a strong side that can be managed by the database. There are a number of large enterprise implementation instances, but I recommend that you try it on small applications first.
Node.js is an interesting language that not only works with JavaScript on the server side, but also has features different from previous programming languages.
If you are interested, please install it and try using it.

Event-driven programs execute only when an event occurs, so they have the merit of being able to perform other processing without waiting for specific processing to finish, and making the flow of processing easy to understand.

What are the features of Node.js?

For example, consider a program that gets “values” from a database on a server.
In this case, the program will stop until the server can be accessed and the “value” can be obtained.
However, in the case of “asynchronous processing” another process can be executed as soon as the process is executed.
In this case, the response can be faster because the next process can be performed immediately, even if you have not obtained a “value” from the server.
Then, you can continue to perform the original processing at the timing when the “value” is obtained.
Nodejs async is characterized by such asynchronous processing and is suitable for Web applications and services that need to access a large number of accesses at high speed.

Another important concept of Node.js is “single thread” and “multi thread.”
A typical server supports “multithreading”, and when multiple accesses come in, it allocates memory and processes each.
However, as this method is often referred to as the “C10K problem”, memory becomes punctured and becomes inefficient when a large-scale access of about 10,000 people comes.
Conversely, in the case of “single threaded,” memory efficiency is very good because one memory handles accesses one by one.
However, it is difficult to control a large amount of access because this method can handle only one by one, but Node.js can perform asynchronous processing.
As a result, it is possible to process a large number of accesses at high speed with less memory consumption by single threads!

Node.js uses the execution engine “V8” developed by Google to execute JavaScript at high speed.
“V8” is installed in Chrome browser, but it is also possible to use this in server side Node.js. Unlike traditional execution engines, JavaScript is very fast because it converts it into a machine language that can be immediately understood by a computer and processes it.
In addition, since it is developed as open source, one of the features is that the V8 source code is released for free.
By using such an execution engine, Node.js, which can originally perform high-speed processing, is further strengthened.

What can Node.js do?

Perhaps the most common use is to develop “web services.”
It is most suitable for the construction of highly real-time services such as video distribution and games, including SNS by especially popular chats.
This is because you can make most of the features that can consume a large amount of access with less memory consumption.
Another attraction is that many libraries are provided free of charge so that you can write these programs efficiently.

“IoT” is an abbreviation of Internet of Things, but it literally means “various things are connected to the Internet.”
For example, if the temperature of the room rises, notification will be sent to the smartphone automatically, or the status of growing the kitchen garden can be checked from the browser.
In recent years, microcomputer boards such as “Raspberry Pi” and “Arduino” are also popular and easy to handle, so more and more people are enjoying IoT development easily.
Under these circumstances, Node.js is working on an environment that allows IoT development with JavaScript such as “Johnny-Five.”
The microcomputer boards such as “Raspberry Pi” and “Arduino” can be controlled by JavaScript, and the features of Node.js can be used effectively.

Are you worried about how to learn Node.js?

Don’t worry, GangBoard offer you efficient courses to master Node.js.
We’ve developed an efficient original learning curriculum which include Nodejs tutorial, nodejs download. We will instruct you in Nodejs architecture, nodejs documentation and nodejs eventloop.
We’ll introduce you to the nodejs latest version and also instruct you on nodejs download.
So now I’ll conclude this blog by again telling you what is nodejs in a different perspective:
Node.js is an open source server-side Javascript application framework. It features a single-threaded event loop model and non-blocking I / O. The Javascript engine uses the fast Google V8 .
It’s easy to think that Javascript is a programming language for Web browsers, but in fact over 15 years ago Netscape’s application server supported server-side Javascript. However, including the client side, it was not so popular. With the advent of Ajax around 2005, Javascript itself was reviewed, and it became a required programming language for Web applications, and in 2009 Node.js was born.
In 2010 to provide cloud hosting services, the SF-based cloud software giant Joyent, Inc. developed a beta version of Node.js-based service. Joyent also contributes to the Node.js project. Other than Joyent, HP webOS 2.0 also uses Node.js.
The development of the mailing list, the libraries and frameworks for Node.js are very active, and it can be seen that developers have attracted much attention. Apart from Node.js, there is also a Javascript application platform (PaaS) that uses Rhino as Erbix as a Javascript engine. Given these trends, nodejs as well as the server-side Javascript are likely to become a major trend in the future.