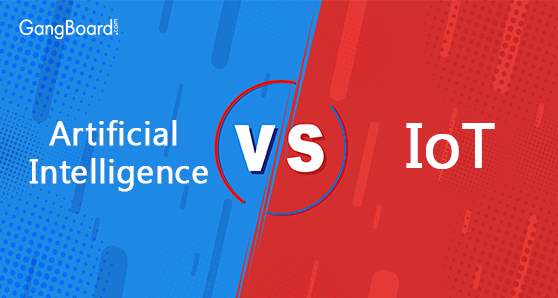 If you investigate the current trending technology you may come across AI, IoT, ML etc more predominantly than the concurrent ones that are trending. Most of these are sometimes interchangeable too since they have a lot much similarity. Both these terms are most commonly associated with Data Analysis, which is again sweeping off the world of technology.

So, let us define the same:

Artificial Intelligence, in short, is the way we want the machines to get smarter in executing tasks.
IoT, on the other hand, is connecting devices online/offline through web and facilitate switch on/off them virtually.
Currently, these technologies have great scope and are revolutionising the way technology benefits are delivered to you.

It is all about stimulating intelligence in machines. Artificial intelligence is derived at after stipulative thorough data analysis after serious consideration on derivations and results. AI is beneficial for real-time analysis, post or pre-event processing also. With a strong database, the AI can increase the accuracy of predictions and act accordingly with respect to the commands input by the external stimulus.
Artificial Intelligence is a way of machine learning in fact, which thoroughly examines the pattern and derive on results effectively.AI is a result of collective predictive analysis, continuous analytics and prescriptive analytics. It is just mimicking human intelligence. Most of the current applications, or devices are completely dependent on the AI, as it gives a better interactive environment which is impelling.

IoT forms an ecosystem of connected devices in a wireless manner which is accessible via the internet.
The connected devices have sensors and have inbuilt embedded systems which can message to the other interconnected devices. The communication of these devices is made possible through effective intelligent technology.
With Iot finding its application in a wide variety of ways like making smart homes, wearable devices, smart cities and even smart vehicles, IoT is expanding day-by-day.

Even though AI and IoT are most correlated and similar in many aspects, a few major differences can be brought about considering the following aspects:

Difference Between Artificial Intelligence and IoT

Ai is all about data, it learns and rectifies its performance from errors encountered and evolve in a genuine way. It supports decision making.

In IoT it is mostly captured moments from sensors that bring in data and are stored inside and whenever required the data is pulled in.

Price is mostly calculated based on each requirement.

Scalable being cloud based.

AI is all about system behaviour

IoT is inbuilt in a system.

AI needs lot of data, like patterns and understanding the behaviours.

Iot is all about sensors.

AI does not specifically require objects; it is the system itself.

IoT is mostly concerned about the objects which are embedded with the technology that can capture sensory movements as well as other patterns.

AI is based on deep learning algorithms which are obtained from various sources to design the behaviour of the system.

IoT is all about sensory data that is used to creating an algorithm to formulate the system behaviour.

AI is all about instinctive reactions with respect to the input received.

IoT is a set of predefined responses, that are triggered using the devices and are predefined using specific codes based on algorithms.

AI is mostly related to online features and responses

IoT is designed in a way, even to work without Internet.

AI is all about human intrusion.it is either human-human or human-computer

IoT is about transferring data without or with human intervention. It is nothing about human-to-human or computer interaction as it has UIDs (Unique Identifiers).

Artificial Intelligence is all about making your system behave smartly according to human behavior, whereas IoT is all about the sensors of devices. Even though differences are stated, Artificial Intelligence and the Internet of Things do have a clear intersection between them, which is why AI becomes the lead to the future of IoT. Together they bring in a connected level of intelligence which will make computers smarter and not just devices that are interconnected.