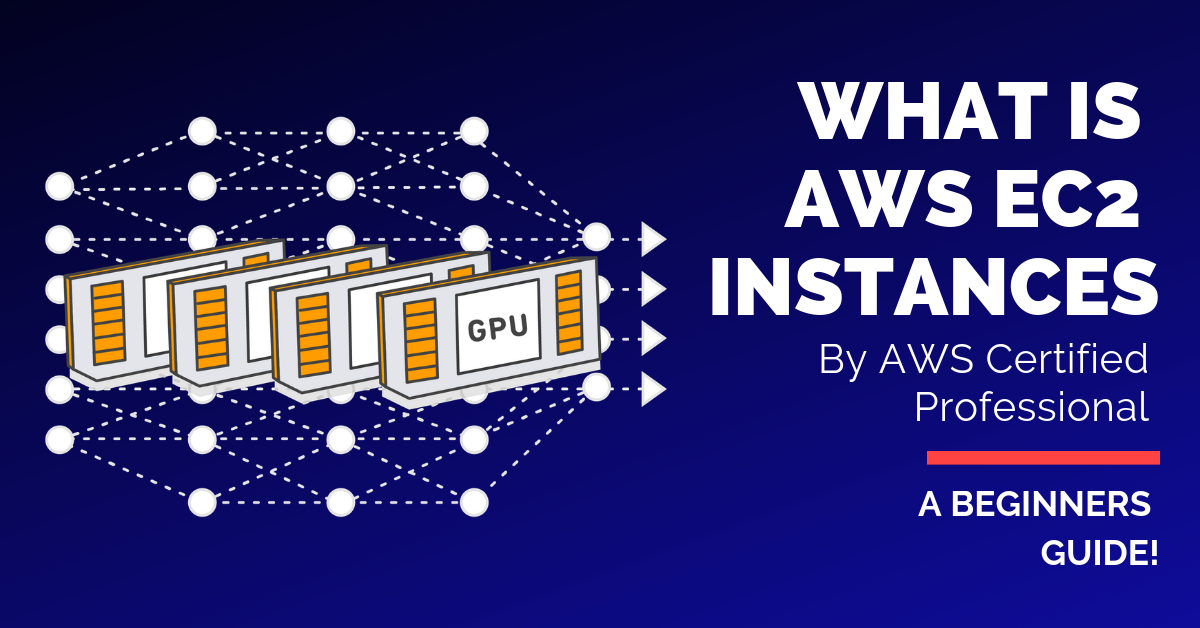 What is AWS EC2 Instances?

The Computing power required for a newly launched application is not predictable by anyone. Instead of assuming high usage and purchasing loads of servers to work independently or, under-estimating the practice will result in application shutdown. In this kind of scenarios, we will be very much comfortable with the service called Amazon Elastic EC2, otherwise said as Amazon Web Services EC2 (AWS EC2).

In today’s trend, most of the businesses are aware of AWS EC2 and its effective functionalities. AWS EC2 is a web service provided by Amazon which affords relaxed system management. Nowadays, it is important to attain a management tool like AWS EC2 to effortlessly manage the prevailing or a fresh system.
Amazon EC2 is a service that provides scalable compute capacity in the cloud. In other words, the EC2 service of AWS gives us a virtual private machine in the cloud.

COMPUTE capacity refers to the Power required to satisfy your workload in the cloud. This computer power given by EC2 service in terms of EC2 Instances is scalable and dynamic. If your workload requires small computer power, let us say Hosting a small website, a small EC2 instance capacity is enough. On the go, if your website visitors/usage is increased obviously you require high computing power. These cases are handled by EC2 by scaling up or scaling down its compute power. That’s we say EC2 is scalable.

Why proceed with AWS EC2?

Let us all be very familiar with what is Amazon EC2. Amazon EC2 is an innovator cloud infrastructure product permitting the users to create influential virtual servers on the claim. Through AWS, you are aided with reasonable, unswerving, and accessible cloud computing services. It deals with any number of domains such as Networking, Storage, Compute, Databases and many more. Though there are multiple domains, “Compute” is the one that broadly utilizes Amazon EC2 service. Creating instances take place in Amazon EC2 whereas these instances are virtual machines created on AWS infrastructure.

It appears to be a small part of a larger computer, having its own network connection, operating system, and hard-drive. It is possible to have manifold “tiny” computers (called ‘an instance’) on one physical machine. Users hold the ability to increase or decrease instance volume within few minutes whenever required using Amazon EC2. All the instances processed via EC2 generally called a virtual machine are created by means of Amazon Virtual Image and hosted over a server virtualizing software known as Xen Hypervisor.

Developers life is made very easy as the computing cloud service is secure and resizable. Users have excessive prospects to select any operating systems, CPUs and RAMs from a bunch.

Just by knowing what is AWS EC2 will not help us to completely get into the process. Hence, refer to the below-mentioned points to get a short glance on how to create EC2 instances.

Role of AMI in creating an EC2 instance

Likewise, launch multiple instances using different AMIs when there is a need for instances with dissimilar configurations. AMIs stands a template, which can either be maintained as a private or share with any AWS accounts.

There are some simple guidelines to build an innocuous, protected, and operational AMI for public usage is an upfront process.

Make a choice for Instance type

Are you aware of Instance types when dealing with AWS EC2? There is a wide range of instance types that are precisely augmented to suit the different scenarios. Different mixtures of networking capacity, storage, memory, and CPU result in various instances types. These combinations provide great flexibility for the business to select the perfect match for the applications. The certified Amazon EC2 instance types are given below:

The need of Instance Configuration

It is mandatory to specify the following factors for configuring the instance.

It is good to decide on what type of storage should be used to create an EC2 instance. Storage size and type, location of the mounted disk and to specify the encrypted volume.

In AWS, there are labels to assign to an AWS resource. Each tag has a key and value, which needs to be defined by the users. Make use of the tags to identify the instances.

Not all users can access EC2. There are some specific rules to be set on the users and here comes the role of security group configuration. Now what is a security group and how is it impacted in AWS EC2? A virtual security system is required to control the stream of traffic for any number of instances and that’s what called security group. Specify one or more security groups while launching an instance, or you can also use the existing default security group.
Once all the above-mentioned steps are completed, review all the settings and by now, you should be ready to launch an instance. This process is extremely secure and none of the hardware components are required.

There are inert IP addresses beneficial for active cloud computing and they are called Elastic IP addresses. A flexible IP address is allied with the user account but not with any instance and the user must control on this address until it is released.

This feature is to import virtual machine images from the current environment to Amazon EC2 instances. Similarly, export the images from instance whenever required.

Auto-scaling allows scaling the capacity of Amazon EC2 to either up or down. There are few apps that require scaling hourly, daily or weekly and it is good to have auto-scaling for these scenarios.

Through Amazon EC2, it is possible to place instances in numerous locations whereas the sections comprise the obtainability regions and zones.

Instances that have high storage aids the users to proceed with high progressive I/O for a few applications like data warehousing and Hadoop.

There are two key things to consider while launching an EC2 instance on AWS:

The Instance types define the virtual hardware of the EC2 Instances. There are various Instance types available which are mainly defined by these dimensions. 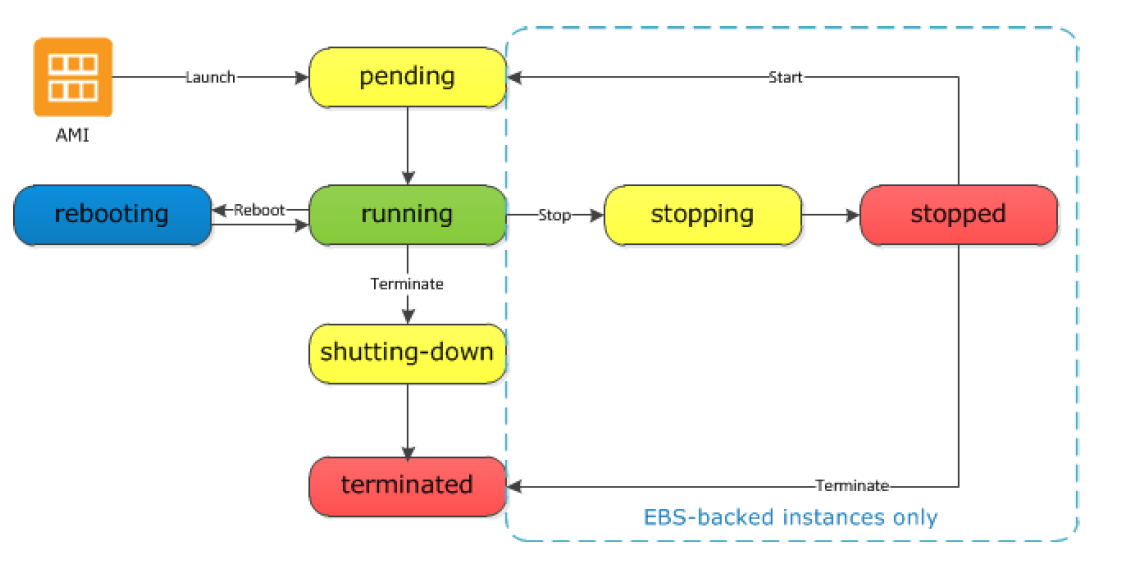 Instance types are grouped into Families based on the above dimensions.

T3 instances are the next generation burstable instances which can burst as long as required.T 3 instances are designed for the applications with moderate CPU usage which is having temporary spikes in it. T3 instances accumulate CPU credits when a workload is operating below the baseline threshold. Each earned CPU credit provides the T3 instance the opportunity to burst with the performance of a full CPU core for one minute when needed.

M4 instances are the good fit for many applications as it gives a balance of compute, memory And networking resources.

M5 is the latest generation of general purpose machines. And the features are more similar to that of M4 instances.

When we want to run a high compute-intensive workload then EC2-Compute-optimized instances are the best choice. Cost-effective and high performance.

Designed for compute-intensive workloads and deliver very cost-effective high-performance machines in the cloud.

R5 well suits for memory-intensive applications which provides an additional memory of 5% than R4 instance. R5 instances deliver with an increased CPU performance than R4.

Memory-optimized X1, X1e instances gives the lowest price per GB RAM among the EC2 instances and are optimized for large-scale enterprise-class in-memory applications.

z1d instances offers both high compute capacity and a high memory. It provides the fastest sustained high core frequency of about 4.0 GHz range.

These D2 instances offer low price, high disk throughput and it can feature up to 48 TB of Hard Disk-based local storage.

These H1 instance category can offer up to 16 TB of HDD based systems which delivers high disk throughput.

network bandwidth within a Placement Group

What is the purpose of a business to use Amazon Cloud?

Amazon data centers and services contain numerous layers of operational and physical security to confirm the protection and veracity of your data. In addition, AWS performs consistent examinations to guarantee its infrastructure security. Through Amazon cloud, a business can retrieve the surety of the data obtainability, integrity, and perfect data privacy.

When discussing the expense of AWS, pricing is not to worry as there is no long-standing obligations and advance payments. Business can experience low and pay when needed pricing while purchasing the services. As already said, only the required amount of storage or computing power is consumed, and no upfront financial commitments or least disbursement is required. It is possible to dismiss the relationship with AWS whenever required, scale down or scale up, and proceed with complete self-service online skill.

AWS permits to recapitulate, research, and transform swiftly via its enormous universal cloud infrastructure. AWS cloud is proved to be very helpful for jobs recurring at systematic breaks, jobs in ‘mission critical’ and short term jobs.