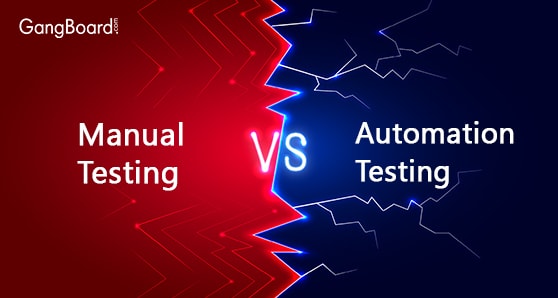 In this tech dominating world, software testing is a huge domain and widely used by many organizations but it is further divided into two areas: manual testing and automated testing.

What Do You Mean by Manual Testing?

Manual testing can be defined as software testing where tests are executed manually by a highly qualified team of Quality Analysts. It usually helps to find out bugs during software testing.

In Manual testing, the tester checks all the essential features of the given application or software. In this process, the team of experts generates the test reports without seeking any assistance from automation software testing tools.

What Do You Mean By Automation Testing?

There is no arguing with the fact that automated testing largely depends on the pre-scripted test that allows you to estimate the actual result with the expected results. This would ultimately help the tester to determine whether or not an application performs as expected.

The best thing about automated testing is that it does support you to execute repetitive task and regression test without any human involvement. Automation requires some manual effort to getting started with initials, though all processes are performed automatically.

Some of the popular Automation Testing tools:

Get Prepared for Manual Testing Interview !

For those who don’t know, manual testing and automated testing involve a multitude of testing methods, including performance testing, black box testing, white box testing, load testing, integration testing, and system testing.
Here’s a brief comparison of each type that will signify the real difference between the two.

1.  Due to human error, manual testing is not accurate every time, making it less dependent. On the other hand, automated testing is more reliable, and the reason behind this is that it is performed by tools and/or scripts.

2. When we do regressions testing, automation testing is an option that suits the best. In scenarios, when the test cases are not run on a regular basis, manual testing seems to be much viable option.

5. One should hold a deep understanding of the programming and its related concepts in automation testing while manual testing doesn’t require Programming knowledge.

6. All the respective stakeholders can log in and check test execution results in automation testing. On the other hand, manual Tests are usually recorded in Excel or Word, and most importantly, tests are not available easily.

7. When it comes down to executing the same set of test cases, this is where the need for automation testing comes in. When the test case only needs to run twice, manual testing is apparently a better option than automation testing.