Home Blog Blockchain What is BlockChain? 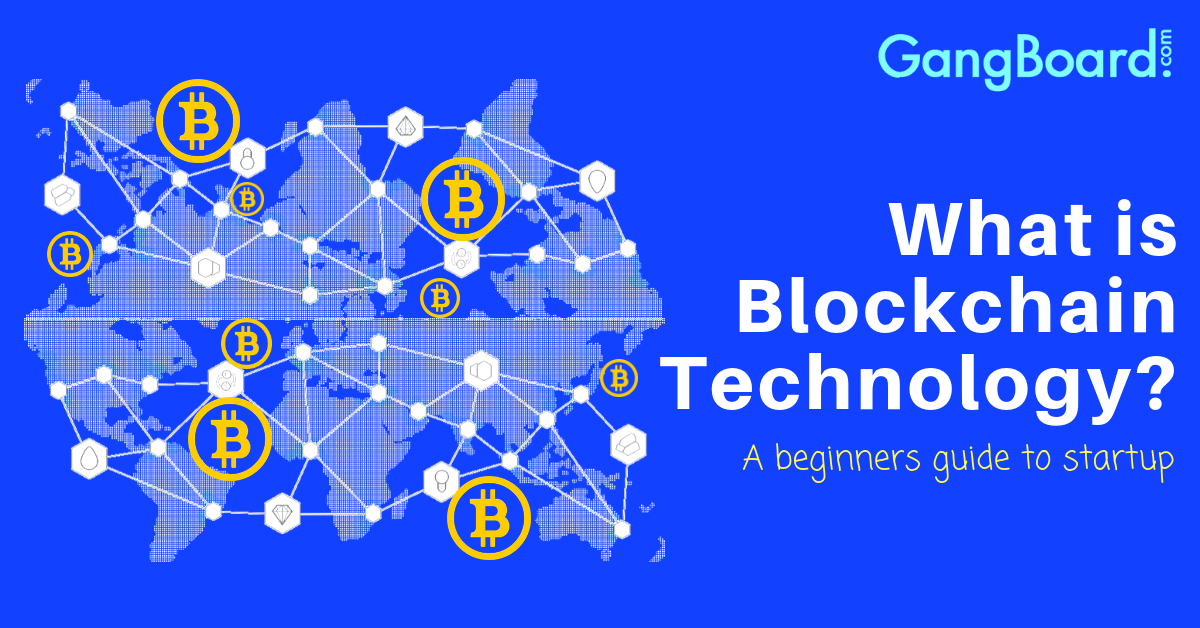 The past decade witnessed a new technology taking over the IT world like a storm, and if you have been following the banking, cryptocurrency or investing world, then you are bound to be familiar with the word Blockchain. The credit for the success of bitcoin goes to none other than the blockchain technology.
For a newbie having zero to very little information about this new evolving technology, finding the right definition can become a gruesome task as the internet is filled with a plethora of information that makes it an even more confusing topic. The standard definition associated with the blockchain technology is, “Blockchain is a decentralized, distributed, public ledger.” But there’s good news, blockchain is easier to understand than what the definition tries to explain.
A blockchain is a digital ledger that chronologically and publically records the transaction made in cryptocurrency. It is an expanding list of records known as blocks. Each block contains cryptographic keys (public and private), the transaction data, and a time stamp. Blockchain by design opposes alteration. This open ledger records transaction between two parties permanently in blocks. Once a transaction has been recorded, the data within a particular block cannot be modified without altering other succeeding blocks. Even so, the permission of the majority of the network is required to perform the alteration.
The basic level of blockchain is nothing more than just a chain of blocks. But these chains of blocks are the digital information in the form of blocks stored in a public database as the chain.
In the blockchain, the digital pieces of information make up the blocks that can be widely divided into three parts:
1. The block stores all the transaction information including the date, time and the dollar amount spent.
2. These blocks also store information about the participants taking part in the transaction. For example, a block containing the information about your splurge purchase will provide the data of the buyer and the seller. But in place of using your actual name, your purchase will be recorded using a unique digital signature which is quite similar to a username.
3. A part of the block also stores the information that can help in distinguishing one block from the other. Each block stores a unique code known as “hash” that allows us to identify one block from the other.

How does the Blockchain Technology Work? 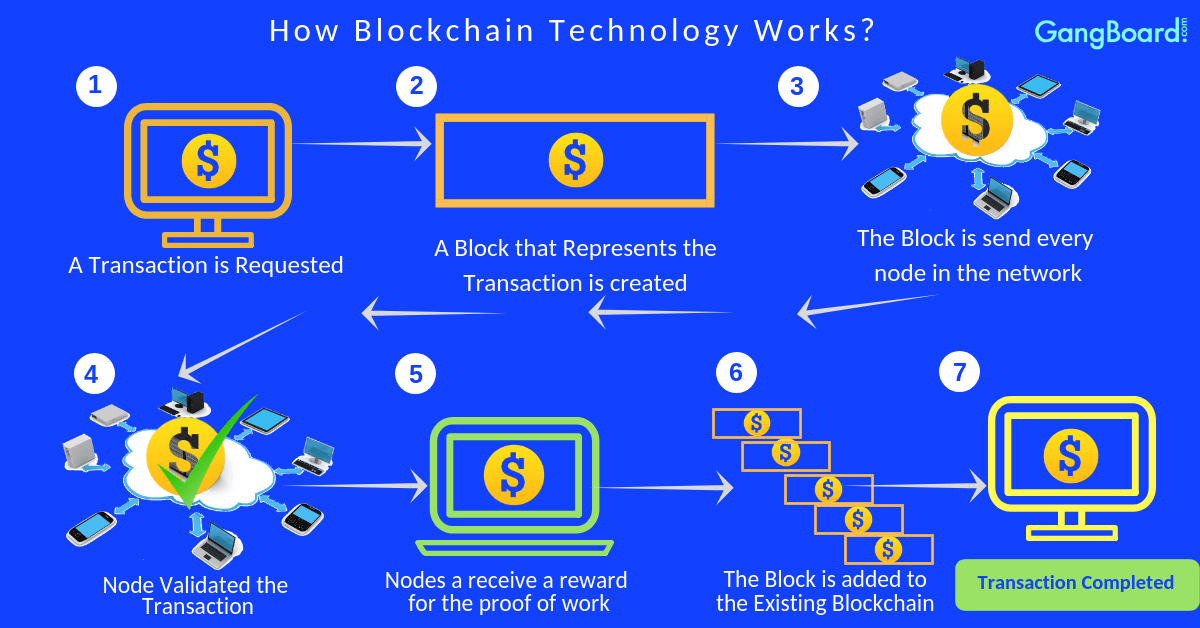 The blockchain is a block-based digital data storage technology, where data is stored in blocks and these blocks are all chained together. Post chaining the blocks, the data becomes unalterable. The block will be available publically and anyone and everyone can view the block in the state it was created. This can help you keep a record of everything that you add to the block and it will never be lost. This is quite an extraordinary technology; it will help you maintain a record of everything such as property rights, money balances, identities, medical records, and more.
Suppose you buy a house and decide to add the photos of the registration document in blockchain; then that piece of document will be available with millions of people. Even if the document is deleted from your system, it will still be there on the blockchain. Thus, any data put in the block of a blockchain is immutable.
When the blocks store new data, it automatically gets added to the blockchain. As the name suggests, blockchain is a string of block struck together. For a block to be added to the blockchain, it is essential that four processes must happen:
1. A transaction must ensue.
2. The ensued transaction must be verified. Once the purchase has been made, it is essential that the operation is verified. In the case of bitcoin, this task is left over to a network of computers spread across the globe.
3. The transaction is then stored in the block and gets a green light if verified. The participant’s digital signature, transaction amount and seller’s digital signature are all stored in the block where it joins the hundreds or thousands of other similar transactions.
4. Hash is then assigned to the block so that it can join the blockchain. Has is a unique,identifying code that helps in distinguishing one block from the other. Once hashed, the block is added to the blockchain.It is important to note that once a block is added to the blockchain, it becomes publicly available for all to view.

Blockchain technology ensures the security and trust in several ways. First, new blocks added to the blockchain are always stored in the linear and chronological order. Once a block is attached to the blockchain, it becomes really difficult to go back and alter the contents of the block. It is because each block has its own hash, along with the hash of the block present before it. Hence, if the information is edited the hash also changes.
To address the issue of trust, blockchain networks implement various tests for computers looking to join and add blocks to the chain. The tests are known as “consensus models,” that requires the users to “prove” themselves before they can start participating in a blockchain network. The most common example employed by the Bitcoin is named as “proof of work.”

The Three Pillars of Blockchain

The three main properties of the Blockchain Technology that has helped in its widespreadacclaim are:•

Immutability in blockchain ensures that once something has been entered into the blockchain, itcannot be tampered. Hence, if even a small change is made in the input, the changes reflected in the hash will be huge.

What can we do with Blockchain?

Ever since this technology came into existence, research has been going on as to the usefulness of this technology in various sectors. Aside from blockchain developers and entrepreneurs, financial institutions were the first to venture into the blockchain territory, followed by consulting firms, academia, and governments.
Being a new technology, there is not much history to it. The researches started three years ago and the results are starting to come in. While there is much to be discovered about the use of blockchain technology, this is what we know so far:

Blockchain establishes a digital identity through encryption keys specific to a particular person. These keys include a private and a public key; combining the two keys creates an irrefutable identity based on ownership. The public key is useful in establishing the identity within the blockchain community, similarly to an email address. While a private key validates express consent to perform a transaction.

A System of Records

The blockchain is a good way of recovering dynamic as well as static data. A transaction is a dynamic data, whereas, a registry is a static data. Static data can be stored on blockchain in three ways:

The blockchain is Immutable

To change an entry in the blockchain database, you will have to change the data on all the following nodes because of this blockchain is considered as a system or records rather than a database.

Serves as a Reliable Platform

The first platform to be based on blockchain was cryptocurrency. Today, there are several new things using the blockchain technology such as smart contracts.

What are the Limitations of Blockchain Technology?

No invention is perfect at the beginning. It takes time and effort to perfect any technology. The same goes for blockchain. Developers and researchers have pointed out the gaps in blockchain technology. These are some of them:

The blockchain is highly technical for normal people to understand; it involves a wide range of chock-full jargons. However, efforts are being made to make the technology easy to comprehend.

Without a large network of users and widely distributed nodes, you may not be able to reap the benefits of the blockchain. Some researchers believe that is the fatal error in this technology.

Bitcoin, the most famous cryptocurrency processes seven transactions every second, each transaction comes at a cost of $ 0.20, and the storage capacity is only 80 bytes.
The booming technology of Blockchain offers a mechanism offering the highest degree of accountability for everyone. Hence, there won’t be any more missed transactions, neither any human or machine errors. Blockchain also eliminates the probability of exchanges done without the consent of any parties involved. With more and more companies picking up on this technology, it’s no longer a question of “if” but just a matter of “when” it will become the most demanded technology in the market.