Blog App Programming and Scripting What is Scala? 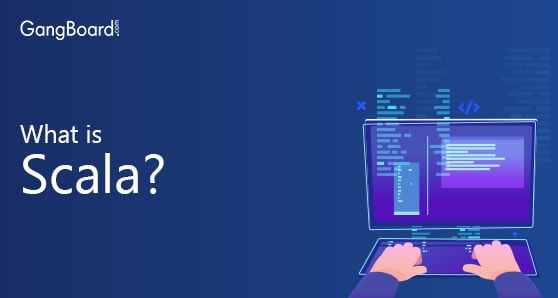 Scala is a high-level programming language that is meant to both object-oriented and functional. Scala is designed to be a powerful, developer-friendly and a fast programming language.  The latest version of Scala at the time of writing this blog is 2.12.8. The word ‘Scala’ is the blending of two words: Scalable and Language. This has been designed by Martin Odersky in 2004. It is incorporated with all the features which can grow or scale with the needs of its users.

Scala is built in a way that it grows according to the demand of its users. Scala was intended to run on java virtual machine so it can solve the problems of java while operating with Java.  Let us see why do we need Scala and what makes Scala different from other languages especially Java.  Scala is becoming popular day by day and there is a  rapidly increasing demand for Scala. This blog post is intended for absolute beginners who want to start their journey with Scala.

Among the pool of programming languages, each one has its own features and benefits. On the same note, here are some notable properties of Scala which makes it stand as the Scalable Language.

SCALA uses JVM and Java libraries making it compatible with JAVA, which gives us a feasibility to incorporate SCALA into any application based on JAVA.

Immutable variables are the ones whose values cannot be changed or modified. In Scala, by default, every declared variable is treated immutable. Using immutable variables increases thread safety, easy to copy as here it is not required to copy complete object but we copy only a reference.

Like Java, the typing in Scala is static. that means a variable is both declared and defined so that the value of variable is known at the compile time itself. This improves the performance and makes things easy to find.This feature helps in fewer problems while executing the language. Hence, programmers will not end with problems that usually occur with dynamic typing. Scala also supports type interference, this makes its act as a dynamic language. In short words, Scala has the benefits of both static typing and dynamic type interference.

Scala was built originally to run on the Java virtual machine. Scala is easily integrated with Java. A Java programmer can easily use Scala code in his/her system due to its interoperability.  Both Java and Scala are capable of executing in the other JDK. In other words, Java JDK can execute Scala and Java can be run on Scala JDK.

The frameworks Akka, Play and Spark are built upon Scala. Scala is growing every day and these are the frameworks which are very popular. Scala, due to its concurrent nature is widely used in Big Data applications along with Spark. Akka is another framework that uses Scala, which helps to build highly concurrent, resilient, distributed applications.

Scala takes the best features of Java and still adds a few features which are not in java to address the real-time problems while working with Java.  Also, Scala makes the integration with Java almost seamless. It is very easy to work with both Java and Scala at the same time.  Any Java programmer can easily learn and work with Scala.  Still there a lot of features are available in Scala that makes it unique and different compared with Java. Unlike JAVA, where import statement should be used only in the beginning of the program, in Scala you can use import anywhere in the program. Scala is strongly typed – Providing data integrity.

There is no need to mention the type explicitly. Scala is dynamic enough to infer the type of arguments thus improving the efficiency of the programmer. Scala is equipped with the technique that can decide the data type on its own which means that a programmer need not specify the data type for any data or return type of a function.

Function return type is deduced from the last executed expression in that function which becomes a handy feature for the coders.

Scala programs are compatible to be executed on web browsers as well using a compiler Scala.js which compiles the code to JavaScript.

Lazy evaluation is the concept of evaluating the value only when it is needed. This saves a lot of time and memory usage. With this lazy evaluation technique, Scala becomes a language which is faster and more efficient.

If there are a set of arguments for a particular function, then the process of currying is converting that function to take a single argument which is the first argument. Then, this first argument returns a function that takes the second argument as input and returns another function, that takes the third argument as input and returns another function and so on. Scala supports this type of currying and helps to avoid passing the same variable again and again.

Scala has features such as Future, Promises which helps process the streaming data in parallel. This kind of ability makes Scala the best language to work with Big Data.

Getting started to write in Scala

SCALA code can be written, compiled and executed in following ways:

What is an IDE?

An IDE – Integrated Development Environment is a tool that has all the needed software required to write and test software in a particular language.

An IDE is a tool packed with:

Note that all are accessed through a single GUI.

IDE’s supported for SCALA are

Let us begin our tour to Scala coding with our most familiar and friendly program, the “Hello World!!!” J.  The below piece of code, prints the statement “Hello, World!!!” on to the standard output device.
As discussed above the function HelloWorld is treated as an object.

Assuming the user to be using UNIX OS – using CLI, below are the steps to compile and get the needed output.

1. Download and Install the Scala package that suits the OS (for UNIX it is scala-2.12.8.tgz)

2. Setup the environment for compiling Scala by exporting the following variables:

3. There are 3 ways we can execute the code:

4. Now, let us try to run this as a scala program:

Thus, having read about executing a small piece of Scala code, let us take a look at the real time fields where SCALA is being used.

Designed and built with API’s and strong tools, Scala is already running over a wide range of applications in the real world.

Companies like LinkedIn, Twitter, Netflix use Scala in their products. Hence, Scala is widely used in Big Data, Streaming, web applications. This has led to the recent demand for this language. Scala’s flexibility, parallel processing, simplicity have paved way to its growth in recent days. Scala is one of the most sought after skills for the Java developers and other object-oriented programmers.

As seen above, Scala is already into a wide range of applications. Its strong features and high performance capabilities have made it gain an important place. Its interoperable capabilities with the other languages have given it a chance to enter the already existing applications and now it is seen in a high usage.

Learn from the Experts

Scala offers promising career worldwide. All that you need is expert training and guidance to master the language. GangBoard, the number one Online Training Institute offers excellent Scala Online Training. Get in touch with their team and reap the benefits of their guidance. All the best!!

0 responses on "What is Scala?"