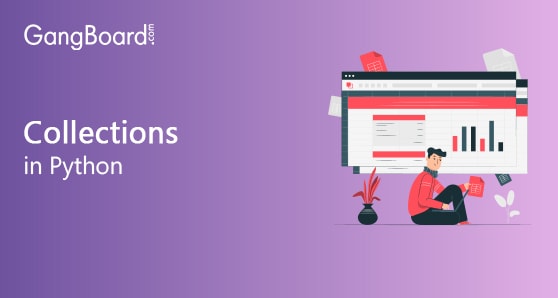 In this tutorial, we are going to learn about “Collections in Python”. Collections are container data types such as lists, tuples, sets, and dictionaries. These data types are called as general-purpose data types. Python provides collection data types namely

Depending on how we declare them and use them, these data types respond differently. Let’s know about them.

Special Data structures in Python serves as an alternative to the general-purpose container data types. As we discussed already, it is an in-built module available in Python. Collections module contains the following are the special data structures in python:

Let’s see the explanation and working of this specialized data structure one by one:

To use the namedtuple() data type, we must import the in-built collections module present in python. A simple import command does the task, as follows:


Later, we can use this data type to perform the functionality we need. A sample instance details how namedtuple() can work.
Output:
To create a namedtuple using a list, we can write as:


We will get the same output for this command what we got above.

The counter is a subclass in a dictionary that counts hashable objects.
Working of Counter:


Output:
We can also perform the following operations using a Counter:
Get Python Online Training with Real-Time Project

Deque is an optimized list that is used to do insertion or deletion of items. It is also called as ‘deck’.

It is a subclass present in the dictionary that calls a factory function to provide missing values. Generally, if a missing key value is called in a dictionary, it does not return any error.


The above script does not return any error, rather it will output ‘0’

This is also a subclass in the dictionary that remembers the sequence in which the entries are inputted. Though you change the key value, the position of the item cannot change because of the order in which the item has been inserted into the dictionary.


As we already mentioned, OrderedDict remembers the sequence in which the key values were inserted. Changing the value of the key will not affect the output. Say, for example, if you change the key value of 2 to 5, the output will remain unchanged.

This class functions as a wrapper to the dictionary objects. In UserDict, the prevailing dictionary acts as an attribute and thus makes tasks easier.

UserDict simulates a dictionary. The content of the instance was stored in a regular dictionary that can be accessed through the attribute ‘data’ of the class ‘UserDict’. But, the reference of the primary data will not be considered but can be used for some other purposes.

This class functions as a wrapper to the list-objects. UserList will be useful for other lists like classes that are inherited from this class and surpass the existing methods. You can also add new ones as well. Similar to UserDict, the prevailing dictionary in UserList acts as an attribute and thus makes tasks easier.

UserList simulates a list. The content of the instance was stored in a customized list. The subclasses of the list depend on to provide a constructor that can be called with no or one contention. With this, the tutorial about the collection module in python ends.  See you all in the next tutorial.