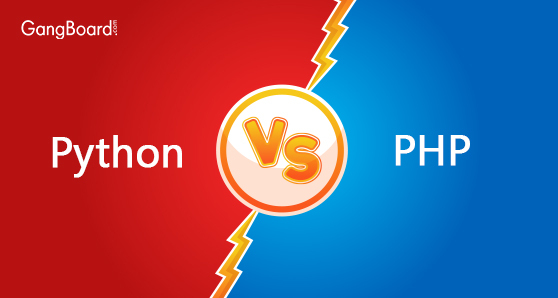 Media and digital marketing have been witnessing an upsurge since the launch of the internet and have attracted consumers and sellers all over the world and knitting the world into a smaller global village. As a result, backend development plays an important role in any business, profession or any other industry to create websites which are enabled through programming languages like Python, PHP, JavaScript, Ruby, and many others.
Due to the availability of so many programming languages, it is indeed a matter of confusion for developers about the choice of the backend development framework. Amongst all, Python and PHP are the most sought after languages by the developers.
Proper understanding of both will allow the developers to make a decision according to their needs and desired results. This article intends to fulfill the same.

Python is one of the most popular modern back-end programming languages. It has gained its popularity as it is easy to learn and simple to implement. Although it was created back in 1989 by Guido van Rossum to replace ABC language, it gained its popularity almost a decade after its inception during the 2000s as a result of a version upgrade.
In modern programming, python is widely used in fields of Data Science and Artificial Intelligence. It is versatile and can be used for web development, mobile application development as well, which makes it an ideal back-end coding language to opt for Popular websites such as Google, Youtube, Dropbox, Instagram, and Spotify make use of Python.

PHP or Hypertext Preprocessor is a server-side scripting language. It is widely used in dynamic webpage development and is the most popular language to create and maintain websites by web developers. PHP is open source and object-oriented scripting language making it ideal for web development, however, PHP can be used for other development purposes as well.
Wordpress, Wikipedia, Yahoo, and Facebook make use of PHP for their backend.

Differene Between Python and PHP

In-depth Difference Between PHP and Python

To understand the functional difference between Python and PHP more clearly, please refer to the topics given below.

Whether it is Python or PHP, both are easy to learn. Even if you are a beginner with the fundamental understanding of coding, you can easily learn these backend programming languages. However, there are certain features that make Python comparatively easier to learn than PHP.
First of all, the syntax of Python is pretty simple. Although PHP syntax is easy to understand too, following a classic pattern, it forces the aspirant to focus on way too many coding patterns.
Moreover, it is easy to make mistakes with PHP as the codes contain multiple “{}” and “$” signs, which leads to errors. On the other hand, Python syntax is easier to understand and uses whitespace indentation that leads to fewer errors and typos.

Looking at the readability in PHP vs Python, Python is a clear winner. The very thought behind building this coding language is to make something that is easy to comprehend.
Higher readability makes it easy to understand for other people working on the application than the coder himself. Moreover, this also makes it easy to spot errors in Python. On the other hand, PHP follows a classic approach which is a little time consuming to perceive correctly.

Frameworks are collections of packages and other modules that allow developers to work on an application neglecting low-level details. It also allows them to set a standard and to work together on a single application without worrying about different protocols and more.
Python provides a number of frameworks such as Django, Flask, Cherrypy, Web2py, TurboGears, Bottle, Pyramid, Pylons, etc. Here, Django is currently the most popular and the most appreciated framework that allows developers to rapidly build applications without wasting much time in setting things up.
On the other hand, PHP also has a number of supporting frameworks such as CodeIgniter, Laravel, Symphony, and Zend.
Comparing these web development frameworks, Python is a clear winner with its Django for Python vs PHP for web development.

A vital point while considering PHP vs Python, debugging is an essential part of developing an application. Such a process calls for debugging tools as a manual process is not feasible with modern world large applications.
Python offers a debugger called Python Debugger or PDB that offers powerful services and is easy to get a hold of. PDB can perform multiple debugging actions as well.
In contrast, PHP offers XDebug which despite being a decent tool, is insufficient to perform in multiple situations. As a result, PHP requires a higher number of debugging tools compared to that of Python, making developers opt for Python instead of PHP.

Although PHP has been there for more number of years than Python, Python has rapidly gained popularity since the past decade. While PHP is majorly used for web development, Python has far more seasoned uses in the fields of Data Science, Machine Learning, AI, scripting, developing, and more.
Therefore, the community and threads associated with Python are way more compared to PHP. This simply means that you are going to receive better support going with Python.

Another important aspect while considering PHP vs Python is versatility. A versatile language is able to function in more than single areas effectively.
Python is functional in many use cases such as scientific research, data science, web development, software development, etc, which makes is one of the best programming languages in terms of versatility.
PHP, on the other hand, is also able to work in other areas apart from web development. However, a lot of aspects make its implementation limited to web development only.

Whether you choose PHP or Python, it is important to understand the aspect of package management first. Package management is something that allows developers to share packages with other developers for easier configuration implementation and other benefits.
With Python, there is PIP that easily allows you to write and share packages. So that you can be assured to have no compatibility issues between multiple developers working on the same system.
PHP also supports package management, however, it is not up to the extents of PIP.

Considering the speed of PHP vs Python, PHP wins by a significant margin. Although PHP 5 was pretty slow, PHP 7 came up with a great evolution in terms of speed. If you are working with software where speed is a more significant factor compared to performance, you should go for PHP.

Considering all the factors that we discussed in this Python vs PHP article, the majority of aspects point to Python as a better programming language. However, you must consider the fact that currently, less than 1% of websites use Python, while about 80% of websites make use of PHP. Therefore, if you are willing to stick to web development and scripting, you should opt for PHP.
On the other hand, if you are looking for something more versatile, go for python. It will allow you to move towards currently bigger things such as Data Science and AI. This also means that you will see significant growth in your career. Also, for novices, we suggest you opt for Python.
Having many pros, Python has been seeing an upward trend in terms of popularity. Contrastingly, PHP also has a great community, however, it is facing a downward trend.
Nevertheless, whether PHP or Python, choosing a programming language is a developer’s own choice. Just make sure to consider the aspects that we have tried to cover in this article and you’ll definitely find the one that you are looking for.