Home Blog General What is Angular? 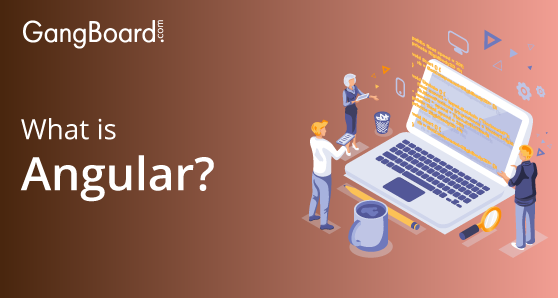 Angular, developed by Google, is the best open-source framework available for software engineers to build contemporary, and lively applications with the help of CSS, HTML, and TypeScript/ JavaScript. Angular got introduced in the year 2009 and this specific framework has received enormous grip for many years for eradicating redundant code. Quicker and lighter applications are ensured by Angular.
TypeScript is most often used to write Angular. For Angular application, NgModules is the fundamental building block that offers a compilation context for components. A set of modules clearly defines an Angular app. Angular is a widespread and frequently employed framework. In this blog, we will discuss on advantages & disadvantages of Angular, why to use Angular, different versions available in today’s market, future of Angular and so on. This would really help the freshers and new developers in order to provide a wonderful result in their job and career.

Angular is one of the frameworks in which we can expect the tools to work with any other tools in a consistent method. Below are the most known reasons to answer the question “Why to use Angular”? We may also mention these reasons as the features of Angular. 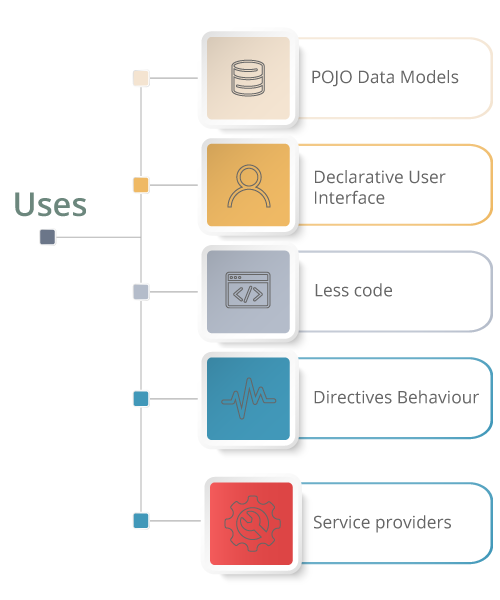 Angular has the Data Models which are POJO (Plain Old JavaScript Objects) and unimportant setter and getter functions are not required. It is your wish to directly add, modify properties and loop over arrays and objects as per the need. The code gets displayed in a clearer and more spontaneous method. Outdated data models are accountable for server syncing and data persistence, hence these models act as a clever data provider.
But, when talking about Angular’s data models, they have plain objects which are behaving like a corkboard. Do you know what is a corkboard? A corkboard is simply a temporary storage sector that helps the users to place and recover data. We can see Angular’s cork boards are closely working with a view and controller. Angular calls this as ‘Scope’ in order to distinguish from traditional data models.

For defining the application user interface, HTML is used by Angular. HTML is the language that is much instinctive and less complicated, instead of using JavaScript to describe the interface procedurally.

Writing an own MVC pipeline is not required in Angular. With the help of HTML, the view is defined which is further brief. Without setters/getters, Data models of Angular are easier to write. Manual placement of data into view is not expected and this is known as Data binding. Directives are written by a separate team with nominal integration problems as directives do not coincide with app code. Without modifying controllers, you can simply manipulate data on the view level using the Angular filters. Hence, writing code becomes very less, which is a major concept included with Angular.

The method of Angular bringing additional HTML functionalities are Directives. Can you imagine a world with lots of HTML rich elements like <grid></grid>? Then manipulating DOM to simulate them is not at all required. The only task that we need to concentrate is assigning attributes to elements just to work on All that our app needs to do is to assign attributes to elements. This concept can be achieved using Directives as it enables the creation of HTML elements on our own. On placing the entire DOM manipulations code within Directives, it is possible to separate from the MVC app. In this way, we can permit our MVC app to update the view with fresh data.

We have many standalone objects in Angular apart from the app which is called Services. These services allow the controller to stay slender and devoted to scope and sight to which it is assigned to.

To Become a  Angular JS Certified Expert in 25Hours

Before jumping into a new framework or technology, we need to know about it in order to acquire its entire benefits and create productive results. Most of the developers, managers and technical people are interested to know the advantages of Angular. The reason for getting to know the benefits are all are concerned about treating change requests, framework existence duration, maintenance of the application, productivity by developer, technology pace, and many more. Below are some of the crucial advantages of Angular. 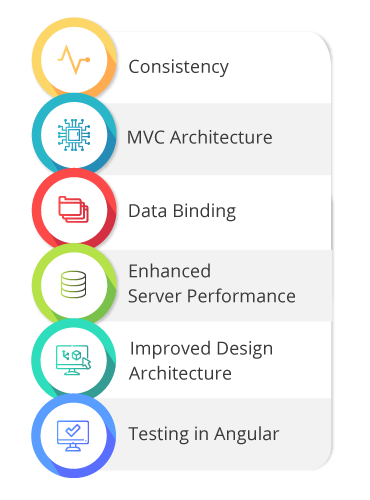 To support production applications, you need to understand the consistency of the code. For any code-based applications, code consistency is a significant mission to struggle for. Angular affords a consistent framework, services, and components.

While creating a client-side app through Angular, values are attached to the frameworks using Model View Controller (MVC) architecture. In addition, foundations are set for other vital features such as scopes and data binding. Without adding further code, MVC mechanically combines the entire application elements.

We can see data flowing in two directions, one is to the controller (C) from source and another from the controller to the source. As we have this advantage, we have the probability to modify both view and model just by changing the value. Using the concept called One-way data-binding architecture in Angular, you will be able to modify data value in the model to see the alterations in the view.

At the time of app creation, you need to know the performance details like receptiveness for user’s requests, primary loading time and so on. There is an excessive impact on conversion, user maintenance and application rating in terms of Mobile app performance. You can easily reduce the server CPU workload, support caching and few more important processes using Angular.

There are many numbers of components available in large web applications. Angular is offering various methods to simplify the management process when a new programmer is joining the project at the beginning of the development process. The built architecture aids the programmers to find and perform code development without any trouble.

Generally, in development and production processes, testing is an important part. Angular framework got built with various features that support testing. Using DI features, test data can be inserted easily within the controller by testers to analyze its output and performance. In addition, the Angular framework contains an enthusiastic unit-test runner that can be helpful in verifying the performance of the application.

Always, we need to have dependable documentation to help the users for app creation. Though the framework documentation got updated, many improvements are still required. It is always better to augment a few more valuable evidence to some approaches and properties, modifications and features comparison. Finely prepared documentation with step-by-step commands would save more time and also shortens the development process.

At the time of application building, Debugging plays a major role. Utilizing the scopes becomes very simple but debugging those become very difficult. Many times, there exists confusion among developers as they don’t have any idea of which scope is used and the value of debugging the scope.

A new candidate can learn Angular easily in the initial stages. But, when moving towards the advanced stages, you may find many difficulties and the learning curve could be a steeper one.

In Angular, server authentication and authorization are not available. Granting approvals to access data and confirm credentials to identify a user is called Authorization. Angular will not be able to provide both features and hence we say Angular is less secure.

There are few browsers that do not support Angular. Hence, we need to do a prior check before implementing the application with Angular technology.

The versions of the Angular framework are from 2 to 8. Whenever there is a new framework available in Angular, we call it with a new version just to evade terminology misunderstanding. The latest 8th update got released in the year 2019, May. Version 9 is expected to release in October 2019. Now we can discuss the details and improvements on Angular versions. 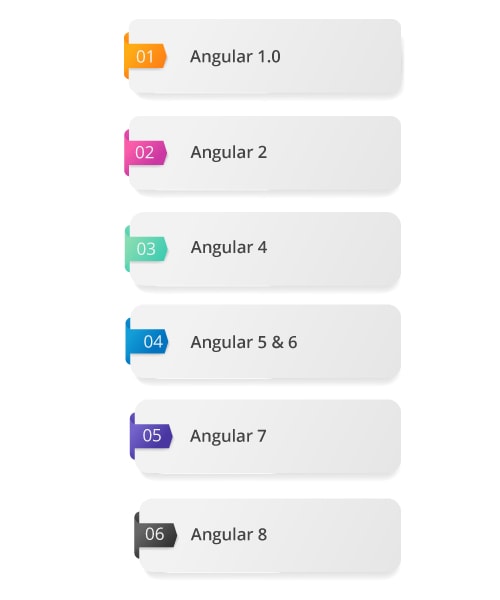 Now let us discuss the differenced between Angular, Angular JS and React JS.

Difference between Angular Vs AngularJS

Difference between Angular Vs React

Angular 9 is expected to get released in the year 2020. The fact is the release was planned for October or November of 2019, but due to various reasons, the release date is pushed to 2020. The exact date is not yet published. Angular is one of the top projecting JavaScript frameworks to develop numerous web applications suitable for both desktop and mobile. So, the popularity of Angular is of no doubt and it has various new features helping all the developers. Below are some of the predictions and trends of Angular expected in the year 2020.

Some of the other Angular job roles are Web App Developer, JavaScript Developer, and UI Developer. The pay scale for each job role varies depending on the experience too.

Demand for Angular Developer is really high and hence you can find various job opportunities from popular job portals like Naukri.com, Indeed.co.in, Monster.com, LinkedIn, Glassdoor, etc. There are a number of JavaScript Frameworks available in the market and the developers can choose as per the need. The companies looking out for Angular Developers are Tech Mahindra, Capgemini, IBM, Elance, Wipro, iGate and many more.