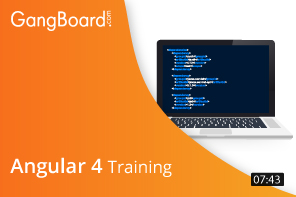 Being a part of this best Angular online course training institute, you can easily develop rich interactive application that runs on multiple platforms.This Angular 4 course makes the creation of single-page applications much easier than before. The participants can also learn to use HTML templates that are instrumental in defining views and help in connecting views with codes through output, event, two-way and property bindings. This Angular 4 course also guides to overcome the challenges of using single-page applications by using the angular router. This Angular 4 Online Training course is offered both for beginners and advanced levels.

In the advanced learning, the students will be able to learn about REST web services and Web Socket data from Angular 4 applications along with developing the applications with the use of Angular CLI. To add to that, this angular course also covers the details of the test and debug of Angular 4 applications through lab exercises and hands-on training to be utterly beneficial for the Angular 4 practical projects. Our experienced trainers conduct online training, and corporate training to suit the needs of the participants. Enrolling in this certification online training can help professionals like you to make a stable career in a rising technology domain and get placement assistance for the highest paid jobs in reputed companies.

Angular is a framework that is used for creating client applications in CSS, HTML and either JavaScript or TypeScript that can be compiled or transpired to JavaScript. In total, there are three major versions of Angular. The first release was of Angular1 in 2010, which is also termed as AngularJS. Angular1 was followed by Angular2, which was released in 2016 with many different features.

The Angular structure is based on the services architecture. It is distributed through a bunch of npm packages that are under the name of Angular. The AngularJS was based on the model view controller. The major versions that are currently available are 2, 4 and 5. Version 3 was skipped because the router package was at version 3 and all the other packages were at version 2. Release of Angular 4 in March 2017 proves to be a major breakthrough as it is the latest Angular release and it provides many enhancements in comparison to Angular2.

Angular 4 comes with inbuilt Animation Package, form Validator attributes, template, title case pipe and more. Angular 4 has many similarities and backward compatibility with Angular 2. Projects developed in Angular 2 can work seamlessly in Angular 4. More than 98% of code is the same for these two versions with the same founding logic.

Angular5 was released as an updated version of Angular4. It had a few more additional features and bug fixes like Build Optimizer, HttpClient and others. Angular6, the latest version of angular was released in 2018. It focuses more on toolchain like ngAngular Elements, Library Support, CLI Workspaces, Angular Material Starter Components. Angular6 is faster than its previous versions as it uses Ivy Rendered which is a rendering engine.

What is Course Objectives of Angular 4 Online Training?

At the end of this Angular 4 Online training course, students will be able to:

What is the Prerequisites of Angular 4 Certification Online Training?

Angular has vastly evolved into latest versions in the last few years, advancing from version 1.0 (AngularJS) to Angular 2 and now Angular 4. Introduced in March, 2017, Angular 4 is the most efficient version of Angular. It is a front-end, TypeScript-based web application platform. If you are thinking to embrace a career that requires the knowledge of Angular concepts, here are the reasons to motivate you further.

Increasing popularity of Angular professionals: Angular is a Google product and it follows a robust versioning model. Their team is always up for fixing bugs and updating features for their newer versions. You will be technologically the fittest after getting trained in this Angular 4 online course and will be the first one to grasp the next version upon its release.

Increasing demand for competent Angular developers: As this latest version of Angular is a complete rewrite of their earlier versions, there is a high chance of its update with the change of requirement. Since Angular 4 is relatively new, there is a booming market for the developers. Learning it now will make you one of those much sought-after developers.

Fittest for Survival: Staying fittest in today’s job market is one of the biggest challenges faced by the developers because technologies rapidly change and evolve. If you are looking for a career in web or mobile application development, getting trained in the Angular 4 is a constructive investment to open up new job opportunities for you.

Our Angular 4 Online Course gives students the opportunity to take classes on your flexible timings. Choose from a number of batches as per your convenience. If you got something urgent to do, reschedule your batch for a later time. The classes can be attended to at any place and at any time as per your choice.

At end of our course, you will be assigned to work a real-time project. Once you completed assigned project with expected results we (Experts Team from GangBoard) will verify and issue Angular 4 Certificate. If you are not able to deliver expected results in project we will support you by clarifying doubts and help you to re-attempt the project.