1965 Ratings (5.0)
Today, every company requires a website/app to build on the advantages the digital platform offers and to become competitive each company organization needs to have an internet presence. According to the studies undertaken, around 2.6 million Android and 2.2 million IOS applications were in use in the year 2018-2019. Looking into all these trends the Front end technologies developers are now high in demand. 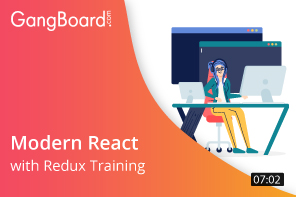 As the digital world is evolving and in reality this evolving trends is hard to adapt but React Redux has already hit the point of being mainstream and has become very popular among developer communities. Also, it is used by number of large companies including Facebook, Netflix, IMDB, PayPal, Tesla Motors and so on.

Why you will learn React Redux?

React native is a technology, SDK, a framework, a library that helps you build a real native mobile application which can be distributed for the IOS and Android based on JavaScript and React. It is by far the most popular JavaScript front end framework today. It became famous not for the reason that it is parented by the Facebook company but for the fact that it is very simple to code and fast to run. React is incomplete without having integration with Redux. Redux helps apps to scale by providing to manage state through information flow model.

Why learn from us?

By the top of the course, you’ll build wonderful React (single page) applications!

Our Training Methodology - Why Us?

GangBoard is a renowned institution that connects people with the best in class Trainers for Modern React & Redux training in Bangalore. Register yourself today to have the ability to engage the course plethora of training materials and real-time case studies.

We at GangBoard make training easy and flexible. We wish a bright and great career ahead.

Any Prerequisites for this course?
What are the benefits of getting equipped with React-Redux?

Whether you want to work for an organization or as a self-employed freelancer, React developers are high in demand. It is one of the Top 10 Creative Jobs of 2019.

In India, ReactJS is rather rare, as opposed to Angular2 and Backbone. So even if you have a small number of employment opportunities, you get a greater wage.

React JS is regarded as one of the JavaScript libraries most commonly used. It is currently used on more than 90,000 websites, according to SimilarTech. In addition to its expansion, demand has increased for remote React developers and ReactJS services.

What is the future of React Redux?

What has been going on recently is a lot of software development companies are moving away from native mobile development into React native. With the increased power of Mobile devices( iPhone and Android) and with the increased sophistication and refinement of libraries like React Native, Flutter and so on, native mobile development is on the verge of diminishing simply because of extra cost. It becomes a lot cheaper and less work to build and maintain these sorts of apps now using these libraries. Looking at all these facts there would be extremely high demand for this new technology.

JavaScript has been the world’s leading component for a long time. It was used earlier for front-end validations, dynamic menus, demands made for AJAX, etc. But since Single Page Applications (SPAs) were introduced things have altered. The first significant framework of this type was Angularjs (1.x) of Google, which ultimately led to the new Angular 2. The development of a new Library by Facebook called React (or ReactJS), which uses a combination of JavaScript and HTML (XML syntax) elements called JSX has been re-established. In contrast to the angular framework, the view portion of the MVC is addressed. The primary objective of a React implementation is to disconnect the entire Web application into a group of HTML-like components. Components. A component defines your UI’s visual look and transforms the data it holds into the user interface.

Scope if you learn React Redux

Technologies and best practices are quickly evolving today, with a significant increase in demand for skilled applicants. A certificate from us is an important addition to your curriculum vitae to assist you to grow above your colleagues. As described above, React has become increasingly popular with organizations worldwide and primarily in India. Developer demand has increased considerably.

Salary to expect if you earn a certificate from us

Our Modern React with Redux Online Course give students the opportunity to take classes on your flexible timings. Choose from a number of batches as per your convenience. If you got something urgent to do, reschedule your batch for a later time. The classes can be attended to at any place and any time as per your choice.

I just completed Modern React with Redux Training. The sessions were good, even some topics are covered out of the syllabus upon request. Thanks to Miss Sonali Prasad, the trainer! I appreciate her efforts!!

Hi! I did my Modern React with Redux Training conducted by Ms.Lavanya. Her way of teaching is comfortable and helps me to learn many new things. I received training in both practically and theoretically. Thanks for GangBoard.

I have completed my Modern React with the Redux Training course in GangBoard. The trainer has covered Complete Core Java with all the necessary examples. Worth taking and got paid maximum attention as this was a special and Fast track course.

I have Completed Modern React with Redux Training at GangBoard. The Training was good, My trainer Lilly Jessica is highly talented and very professional. Thank you for your patience in explaining things to me until I understand.Thanks to GangBoard.

Hi, I have attended the Modern React with Redux Training in GangBoard and the instructor Mr. N. Karthik. It was a great experience to learn. My trainer did a real-time experience and cleared all the doubts.