The Jmeter Online Training course has been intelligently designed to provide in-depth knowledge about Jmeter to the participants. This course strives to cover all aspects of JMeter from the basic to the professional level. 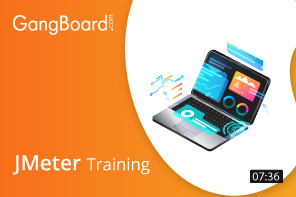 What is this Course About?

JMeter is an open-source Java desktop application developed for Web applications’ load and performance testing. Performance testing of Static & Active web resources such as databases, files, scripts, Java objects, FTP servers, etc. can be done through JMeter. JMeter handles various tests, such as performance, regression, load, functional, etc. JMeter is capable of simulating a heavy load on a network, object or server so as to carry our performance analysis and strength testing under different load types.

What are the Course Objectives?

Upon completion of the JMeter Online Training program, the participants will be able to comprehend the components of Jmeter such as assertions, logic controllers as well as samplers. They will be able to comfortably develop and auto record scripts using Jmeter. Furthermore, they can run tests and produce test reports.

The course will also enable the participants to master the technical skills needed to use both assertions and controllers in Jmeter. They can easily put Load on Web applications, supervise the application performance in the given load, add plugins for enhanced reports, integrate Selenium with Jmeter, use Jmeter UI Components, record, and playback with Proxy, analysis of load with listeners and application of load on Test cases with Thread Group.

Who is eligible for the Course?

This JMeter (performance + load) Testing Online Course doesn’t lay down any formal prerequisites for enrollment. Anyone willing to learn the usage of Jmeter can enroll for this course.

Jmeter is a testing tool and there’s no doubt about the fact that the future of testing is bright and shiny. New applications are being developed consistently as long as this development takes place, opportunities in the field of testing will keep arising. Every organization requires a tester and hence job opportunities for testing will always be abundant. In fact, in the recent past, jobs in the field of testing have experienced a very high growth rate.

Our JMeter Online Course gives students the opportunity to take classes on your flexible timings. Choose from a number of batches as per your convenience. If you got something urgent to do, reschedule your batch for a later time. The classes can be attended to at any place and at any time as per your choice.

Adding Assertions to the test script:

Reporting and Analyzing the Results:

At end of our JMeter Online course, you will be assigned to work a real-time project. Once you completed assigned project with expected results we (Experts Team from GangBoard) will verify and issue Python Certificate. If you are not able to deliver expected results in project we will support you by clarifying doubts and help you to re-attempt the project.