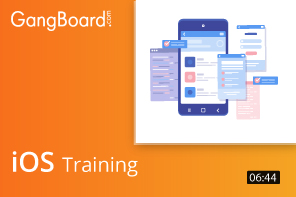 This iOS Certification Training in San Francisco is developed to allow you to certify your new skills and knowledge in iOS app development so that you will be able to have an advantage in the event of job interviews, customer consultancy and professional growth in the company. iOS is preferred to make mobile apps for Telecommunication, Social media, Education, Taxi booking (location-based apps), On-demand delivery apps (grocery/gifts/food), etc. You can get an iOS-related job with a salary of around 99k dollars per year after you complete iOS training in San Francisco.

This iOS Certification Training in San Francisco provides the knowledge necessary to develop apps for iPhone, iPad, Apple Watch and Apple TV using the Swift language. In this course, you will learn how to use Xcode, screen transition, list display, data saving to a file, etc. From screen creation to data persistence, you will learn how to implement focusing on functions that are frequently used in general iOS applications. It also supports the creation of apps with multiple screens and introduces how to create list screens and implement screen transitions using navigation. In addition, you can learn how to operate Xcode and write code efficiently by using hands-on training to learn while following the steps. Therefore, even those who do not have experience using mobile applications or Macs can take the course as the first step with confidence. Execution environment of the iOS course in San Francisco is MacBook Pro, macOS, Xcode 11, Playground, Swift 5, and iPad / iPad mini. When you complete the iOS training course in San Francisco and the practical project, you will obtain a Certificate that you can share with potential employers and your professional network. This course is available in both as live online training and live classroom training.

Other salient features of iOS training in San Francisco are:

What skills will you acquire in iOS Training in San Francisco?

You will understand the basics of iPhone / iPad application development, and actually use the Swift language of iOS programming to create registration/edit / list display screens with pictures and characters laid out. Other skills you will learn in this placement-oriented training are as follows:

What are the objectives of iOS training course in San Francisco?

At the end of iOS training in San Francisco, students will have learned the basics of iOS application development and will be able to try their hand at developing real projects. The other objectives of the iOS course in San Francisco are the following:

All the above objectives will be attained in the iOS Certification Training in San Francisco and 24/7 live support and project support will be provided. Support will be given to each student until she releases her own original application in iOS.

Who must join this iOS Certification Course in San Francisco?

The target audience of iOS training course in San Francisco are the following:

What are the prerequisites for attending iOS Training Course?

To obtain better results from participation in the course, it is advisable

Why should you join iOS Certification Training in San Francisco?

With this iOS course in San Francisco, we offer you the possibility of mastering the new development concept that has marked Apple and the community for iOS development. IOS programming has changed a lot in the last four years due to the creation of the new Swift programming language, and in the last three years due to the new programming paradigms applied in this language. Some good reasons to choose this best online iOS training in San Francisco are the following:

What are the iOS job opportunities in San Francisco?

The mobile app market is constantly evolving and always looking for new professional personnel. According to the US Bureau of Labor and Statistics, application developer jobs will grow 31% between 2020 and 2026. With the skills acquired and certified during the iOS Certification Training in San Francisco, you can make use of the wonderful opportunities provided therein. You will be able to work as a Junior Mobile Application Developer. You can easily get a job in a software house or web agency oriented to the app and gaming market, with the placement assistance provided by iOS training in San Francisco. Or you can work as a freelance developer or online with other developers or designers. After this iOS Certification Training in San Francisco, you can even become a digital entrepreneur in the world of mobile app and game production. Major job sites reveal that 100s of jobs are available in the iOS app development in San Francisco, such as Mobile engineer (iOS), iOS engineer, Mobile application developer, Mobile developer (iOS), iOS app developer, iOS software engineer, Mobile applications and iOS developer. Job vacancies in iOS are frequently there in major companies like NTT Data, Adobe, and Google. According to Glassdoor, iOS developer salaries in San Francisco range from 99k to $155k dollars.

Our iOS Online Course give students the opportunity to take classes on your flexible timings. Choose from a number of batches as per your convenience. If you got something urgent to do, reschedule your batch for a later time. The classes can be attended to at any place and any time as per your choice.

Our iOS classes trainer is a senior developer with 10 years of experience in the development of iOS applications. He had been an employee in two top San Francisco Mobile App Development companies, i.e., Menlo (Los Altos, CA) and CitrusBits (San Francisco Bay Area). He has played a significant role in digitally transforming the businesses of a few Fortune 500 companies. He has specialized in Swift and reactive programming on the iOS platform. He will help you to make elegant codes, wonderful user experiences and magnificent user interfaces.

At End of our iOS Online Course, you will be assigned to work real-time projects. Once you completed the project with expected results we will verify and issue a globally recognized iOS Course Completion Certificate from GangBoard.

I have done iOS Training in San Francisco at GangBoard. It’s really an awesome learning experience. All the concepts were covered without any compromise. The instructor was very well determined and Focussed on Clear Examples. It’s completely awesome. Thanks to GangBoard.

I have taken iOS Training in San Francisco from GangBoard. I wondered, they schedule the classes and assignments properly which is convenient for the learners. Through this approach, we can learn easily without any tension. I really appreciate GangBoard Team for their coordination. It’s simply good.

I had a good experience with the iOS Training in San Francisco at GangBoard. Well organized and practical approach towards the course. It’s really helpful for me to work in a real-time environment. Thanks to GangBoard.

I enrolled for my first Live Online iOS Training in San Francisco with GangBoard. The instructor was pretty good and strong on the technology side. I am happy with the service I got with them and I have planning to take some more courses from GangBoard.