The GNS3 Associate certification exam is a proctored online exam that lasts for 90 minutes. It tests for the candidate's knowledge and skills that are related to GNS3 virtualized, multi-vendor networks which include traditional IPv4 and IPv6 routing technologies, network automation, and programmability. The cost of the GNS3A exam is US$129 and will expire after three years. It consists of 70 multiple-choice questions. 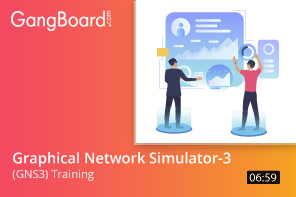 Graphical Network Simulator 3 or GNS3 is a network software emulator that is used to build complex networks. It can be used to emulate Cisco router, ASA as well as other vendor devices. GNS3 is open source and free and has been downloaded over ten million times. Moreover, it has been used by several companies globally such as Walmart, NASA, Exxon, etc. A lot of organizations test their networks on GNS3 before deployment. Even though it was initially created to help students to prepare for certification exams, it is also for testing as well as for verifying deployments in the real world.GNS3 also supports various networking vendors such as Cisco, Arista, Juniper, Aruba and so on.It is scalable because there are no limitations on the number of devices you can add in your topology. GNS3 can be used on several platforms such as your computer, server or in the cloud. It has a huge community comprising of over a million users who can offer help and support for lab issues.

GNS3 can help network engineers and professionals to test various scenarios as it can emulate their network. GNS3 works on different operating systems like Windows, Mac Os, and Linux. However, Linux is most recommended it has some special features which can be used with GNS3. GNS3 combines with a virtual machine in order to allow users to simulate complex networks and support multiple vendors. By using a virtual environment, it allows users to build and test a network in a risk-free environment. Virtual devices of various kinds can also be added to the GNS3 topology. Real devices can be combined along with virtual devices. Moreover, the need for network hardware is reduced because the environment is simulated. It also enables troubleshooting and proof of concept (POC) testing. The GNS3 uses an emulation software called Dynamips which is used to simulate Cisco IOS (Internetwork Operating System). It allows administrators to add real Cisco IOS images and simulate a network.

What is the GNS3 course about?

The GNS3 course is an official Associate course which covers the topics that are essential for helping participants to prepare for the GNS3 exam. It is a multi-vendor certification for network engineers that focuses on the core concepts and skills that are important in this current age of ever-changing intelligent networks. This certification program is known as the GNS3 Certified Associate.

As technology is evidently changing rapidly, the networking environment is also advancing to a point where billions of IoT devices are being added to the Internet each year. As a result, it is not as simple to configure network devices manually through a Command Line Interface or CLI. Therefore, it is essential for network engineers to upgrade their skills on automation as well as network programmability. The GNS3 course will help individuals to have the knowledge and skills to install and build virtual network using GNS3 with the understanding of several vendors and protocols. It will also look into the core functionalities and architecture of GNS3. Individuals will be able to identify and troubleshoot issues related to installation and configuration of GNS3. Python and Ansible network automation scripts will be used to build networks. Participants can also learn about SDN networks based on OpenFlow and appliances based on Docker which can be used within the GNS3 topologies.

What is the course objective?

The GNS3 course aims to equip individuals with the fundamental knowledge on how to install, configure and set up a basic GNS3 network lab. It can aid network engineers by providing them with the knowledge on how to emulate, configure as well as test and troubleshoot networks that are both virtual and real. It is also essential for helping individuals to prepare for network professional certification exams.

What are the Prerequisites for GNS3?

There are no prerequisites for the GNS3 course. However, it is recommended that participants have some general computer knowledge or networking certification.

Why choose our GNS3 Training Program?

Our GNS3 Online Course gives students the opportunity to take classes on your flexible timings. Choose from a number of batches as per your convenience. If you got something urgent to do, reschedule your batch for a later time. The classes can be attended to at any place and at any time as per your choice.

At the End of our GNS3 Online Course, you will be assigned to work real-time projects. Once you completed the project with expected results we will verify and issue a globally recognized GNS3 Course Completion Certificate from GangBoard.

Hi! I did my Graphical Network Simulator-3 (GNS3) Training at GangBoard conducted by Ms.Lavanya. Her way of teaching is comfortable and helps me to learn many new things. I received training in both practically and theoretically. Thanks for GangBoard.

I have completed my Graphical Network Simulator-3 (GNS3) Training course in GangBoard. The trainer has covered  Complete GNS3 with all the necessary examples. Training went with all the live example and writing code instead of copying elsewhere from Other websites. Worth taking and got paid maximum attention as this was special and Fast track course.

I completed my Graphical Network Simulator-3 (GNS3) Training in GangBoard. My trainer was Saravanan and he had really trained me so good with real-time experiences. Good practices and videos he shared. I would recommend anyone who needs GNS3 training to go with Saravanan and GangBoard.

I’ve completed the Graphical Network Simulator-3 (GNS3) Training at GangBoard and my guide was Mr.Sathish Kumar . He is such a wonderful trainer who makes sure we are comfortable and we understand all the concepts completely. He patiently clears all our doubts and I would say his way of teaching is excellent. I was given multiple tasks practically which helped me more in understanding all the concepts. I would strongly recommend GangBoard for Selenium learning. End of the day, It is worth the time we spend to learn in GangBoard Thanks.

I have completed my Graphical Network Simulator-3 (GNS3) Training in GangBoard with trainer Kathir sir. I would take this opportunity to thank him. He is having sound knowledge of GNS3 and tremendous problem-solving skills. He has made me understand concepts theoretically and practically. I would recommend Kathir sir as a trainer for anyone looking for GNS3 training.