The DevOps Certification Courses would be helpful to the learners to know about the usage of continuous integration, continuous delivery and continuous deployment for the SAAS applications. DevOps gives a competitive appearance to the businesses, increases the ROI and simplifies the data-centric process. Git, Ansible, Jenkins, puppet, docker, IAAS, PAAS make the coding as competitive for the coding environment and analytics environment. 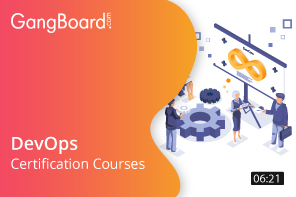 DevOps is SAAS for the users as it is used at the software level but it works on the server and virtual machines which makes it also as PAAS and IAAS. The live Instructor is allocated to the students with diversified knowledge and the trainer skill is known through the course completion rate and placement rate after DevOps Certification Course.

DevOps break the process of testing into many parts and for each part, efficient tools are used from the toolchain of DevOps. After the DevOps Certification Training, the learners will get to know about the DevOps life cycle, DevOps tools, automation process with DevOps, manage the configuration, and improve the quality of the SAAS applications. DevOps engineers receive 6,42,602 in India and $92,054 in the USA which is expected to grow as DevOps Certification Training made the process of building, deploying and testing from hours to seconds with minimum time process. Speed and uptime are the reasons for the popularity of DevOps technology.GangBoard offers 24/7 live support to understand the concerns of the students. The students not only gain the knowledge into their subject but become an all-rounder in the IT industry with self-confidence which they gain with the quality training institute. The toolchain of DevOps requires knowledge about the programming languages, automation process, and operating system knowledge which is basic eligibility to join the DevOps Certification Course. collaborating the code, improving the code quality with team reviews, using the shared repository for checking the code, exploratory testing for testing the risk element, dashboards with details of tools and code repository before release, automation with control over deployment, application monitoring, server monitoring, and chat tools are the privileges of DevOps for a better and fast performance of the SAAS applications.

Containers face the problems of versioning and for this problem; the configuration file with all the details is available in the run time environment. Kubernetes as a part of DevOps Certification Course provide the solution to control the container, automate the deployment, manage the application, and scale the application. The search engine of Google is empowered with kubernetes which use the APIs for the cluster, VM’s, nodes and physical machines connected to the cluster, components of containers or pods for running the container, control the version, load balancer which handles the dynamic number of pods. Kubernates Certification Training is suitable for candidates with experience in development, operations, and automation to enter in to the cloud computing industry.

Docker Certification Training comes with basics of docker commands, docker logging, networking with containers, docker images, distributing the docker images, managing the docker images, container management, using docker compose, understanding docker swarm, and understand the security points with Docker. Docker is one of the tools taught with the DevOps Certification Course to pack the application with all the details for different types of containers like Ubuntu container, CakePHP container, Centos containers, and Tomcat-Ubuntu container. The blueprint image with the different container models is used for the configurations which minimize the installation work. Trainers at GangBoard are the industry experts who give project support for understanding the usage of the tool for different types of challenges with DevOps Certification Course.

AWS DevOps Certification Training will give in-depth knowledge about AWS code pipeline, AWS code Build, AWS code commit, and AWS code deploy. These tools help the users to view the delivery process, control the versions with source code or libraries, continuous integration, and automate the process of the deployment. Join for the DevOps Online Certification Course to increase the earning potential with a elite group of professionals.

Learning Jenkins Certification Training would be a real skill to empower your portfolio. Jenkins tool is used along with Selenium, Azure DevOps and AWS DevOps for continuous automation. The GUI tool, plug-ins, and maintenance made Jenkins as a popular tool in the cloud platform. Learn Jenkins Certification Training to gain thorough knowledge in the process of automation and cloud environment. DevOps Online Certification Course is the course for enhancing the professional credibility which matches the experience of the learner.

Git and Git Hub Certification Training is suitable for the Git is the tool for controlling the versions and Git hub is for maintaining the source code with old and new as repositories. Git hub helps for maintaining the code with the user account through cloud. After the course the concepts in which the learner get full knowledge includes first repository, merging, branching, pull requests and work flows. Version control tools are available with centralized system and separate branching system. Git works with separate branching system which is easy for the maintenance and efficiently handle the changes in the code. Git and Git Hub are taught as the part of the DevOps Certification Training Online.

One report says that the big product based companies technology-based people requirement is as follows Google with programmers of 87 percent, cloud skilled professionals with 13 percent, as far as Salesforce company is concerned 46 percent are from cloud background, 39 from agile background, and 15 percent programmers, Amazon as a juggernaut in the IT industry have programmers and candidates with web services as 57 percent and 21 percent. Big companies give more importance to highly qualified candidates with certification. Programmers and cloud engineers are highly demanded in the big product-based companies for which Git and Git Hub Certification Training will be very helpful.

Python Courses Online with Certification will contribute the scripting knowledge required to automate or deploy the containers in DevOps. Most of the tools of DevOps are written with the background of Python. Ansible and salt are based out of the python language which forms the toolchain of DevOps. The different types of problem which arises in using the DevOps like staging during deployment, SQL server problem, and uptime concerns, to do the customization, and building the apps for the visualization are handled with the usage of Python. Python Tutorials which come as a part of the Python Classes will enlist the problems which demand the Python Training when learning DevOps. Problems are the starting place of upgrading skills in the technological world. Python Course consists of the Self-paced videos for Python Course which explains the basics and challenging advance level concepts to handle the problems in real-time as a DevOps professional.

Our DevOps Online Certification Course gives students the opportunity to take classes on your flexible timings. Choose from a number of batches as per your convenience. If you got something urgent to do, reschedule your batch for a later time. The classes can be attended to at any place and at any time as per your choice.

At the End of our DevOps Online Course, you will be assigned to work real-time projects. Once you completed the project with expected results we will verify and issue a globally recognized DevOps Course Completion Certificate from GangBoard.

I have completed the DevOps Certification Course Training in GangBoard. My Trainer is Mohan. His way of teaching is very good and he clears all the doubts without any hesitation. Thanks to GangBoard and my trainer.

I have completed my DevOps Certification Course at GangBoard.Well, professional training. The trainer is more experienced & depth in knowledge. Thanks to GangBoard for giving this opportunity.

Hi friends, I have Completed DevOps Certification Course in GangBoard. My Trainer is Lenin. I really liked her approach. The Trainer approach benefited me in terms of confidence in Asp.Net MVC. Excellent training. I trained Very well. Thanks to GangBoard for giving these opportunities.

I have joined the DevOps Certification Course and the training was excellent I did like the class very much. The trainer(Lenin) answered all my questions, no matter how many times I asked. Further, Lenin(trainer) also has provided notes with which I may study from the basics and offered his assistance anytime we had doubts. I would definitely recommend him to a friend.

I have joined for DevOps Certification Course and got a trainer mr.lenin, he is friendly to each and every student and he has very good knowledge about programming language. What I like most is one to one interaction, I have never seen any institute providing trainers of that quality. overall, it was fun and I learned a lot.